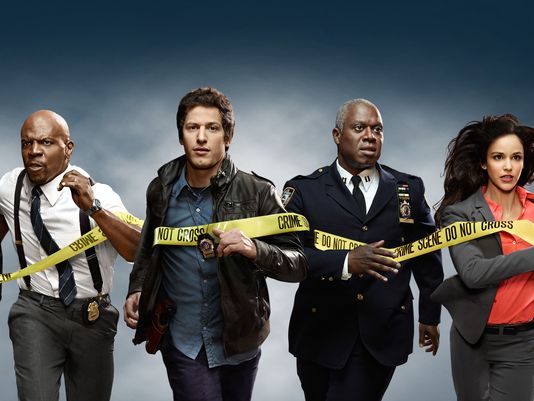 With the overall decline of traditional TV viewership, the networks put an enormous amount of pressure on every show to be a hit right from the start. If the pilot episode of a show gets bad ratings, it is entirely possible that the show will be canceled. This pressure is in many ways counter-intuitive, and nine times out of ten the first of episode of a series is never truly representative of what the show will become. It took The Office, Parks and Recreation and even the classic Seinfeld more than one entire season to become the shows that audiences finally fall in love with, for example. Comedy pilots face even more of a challenge, because they have to introduce an entire world, and deal with enormous amounts of exposition, all while being funny. The most buzzed about new comedy this season is without a doubt Brooklyn Nine-Nine, a work-place sitcom set in a police station, and created by Mike Schur, who was also behind Parks and Recreation. With its first two episodes, Brooklyn Nine-Nine is already on firmer ground then its spiritual brethren Parks and The Office, and, in many ways, feels like the next step of this style of comedy.

Brooklyn Nine-Nine is centered on the titular NYPD precinct in everyone’s favourite hipster borough, and the wacky detectives who work there. Captain Holt, a no nonsense veteran of the police force, enters the picture the new commanding officer, and immediately clashes with Detective Jake Peralta, the requisite man-child  of the group. Peralta and his fellow detectives are investigating a murder when Holt arrives, and forces everyone to adhere to a far stricter standard then they have been used to. Since this is a feel good show, they team up and catch the bad guy, but the episode works in an impressive amount of character development along the way.

Although the cast is headlined by recent SNL-alumni Andy Samberg as the immature Peralta, the show operates much more as an ensemble piece. Every character gets a least one scene to assert their personality and introduce themselves to the audience. There’s detectives Amy Santiago, Peralta’s uptight partner and friendly rival, Rosa Diaz, a scarier version of April from Parks and Recreation, and Charles Boyle, an anxiety riddled yet hard working officer who is not-so-secretly in love with Diaz, along with Terry Crews playing against type as Sergeant Jeffrods, who is terrified of the potentially dangerous aspects of his job. The cast is rounded out by Andre Braughner as Captain Holt, whose continual deadpan might be the funniest thing in the whole show. The main conflict in the first episode is Holt’s instance that Peralta adhere to dress code and wear a tie. The show plays off the typical stickler vs slacker dynamic, before revealing a very real character motivation behind the new Captain’s actions. Holt is openly gay, and after being unfairly denied a command for years he is determined to make sure his precinct runs perfectly.

The second episode features a nice nod to the pilot, as Samberg is now wearing a tie over his flannel shirt. It’s a very nice touch to help show some actually character growth so early in the series. Peralta and Holt still don’t see eye to eye, however, and the Captain announces he will babysit the detective until he learns to do the boring parts of his job, i.e. paperwork, correctly. Like the pilot, this episode plays their dynamic for laughs, but also takes the opportunity to prove that Peralta actually does care about his job. It’s a much lighter case then seen the first episode,  and they are one the hunt of a vandal who is spray-painting cop cars with male genitalia. When the perp is caught, he turns out to be the son of the Deputy Police Commissioner, forcing Peralta choose between doing his job correctly and putting the future of his career in jeopardy. He of course makes the right choice, and Holt steps in to show that while he is hard on his squad, he will protect from any threat, and isn’t afraid of confrontation.

The second episode continues the dynamics in the first episode, but unfortunately has the rest of the ensemble take more of back seat to Peralta and Holt. The secondary plot revolves around Detective Boyle getting freaked out by a psychic, and consequently refuses to leave his chair, and watching a guy in a chair isn’t as interesting as chasing down a penis-painting vandal. The best part of the pilot was the way that the entire team would continually interact with each other, and play off their vastly different personalities, and that element is absent in the second episode. Of course, the show is still finding its footing, and certain episodes are bound to focus on different characters, just as long as it doesn’t become “The Peralta and Holt Show”. This episode also introduces the use of cutaway gags, punctuated with the white noise of a police radio, which are wisely kept to a minimum.

Brooklyn Nine-Nine definitely feels like the sister-show of Parks and Recreation, as both involve wacky characters in work places that have been characterized as heartless bureaucracy. These shows buck the trend, however, because the humor is actually nice for a change. The first episode of Brooklyn Nine-Nine features the detectives investigating a murder, and the show resists every temptation to make jokes about the crime itself. The humor is not derived from the victim or the crime, and the characters are all firmly dedicated to solving the case. For years the trend in comedy was to achieve laughs through awkward situations or downright nastiness, and The Office and It’s Always Sunny In Philadelphia have used that style to create decade spanning series. While it’s certainly a valid style of comedy, it does become weary and familiar over time. By portraying its characters in relatively positive light, and not trivialize the cases they investigate, Brooklyn Nine-Nine feels quite refreshing.

As the trend of “nice” style comedy continues, Brooklyn Nine-Nine makes it mark by assembling a very talented cast and a smart crew who knows how to operate in this form. All the actors make the most of their screen time and establish their characters very effectively, and Andy Samberg proves that he is actually capable of maintaining a premise that lasts longer than three minutes. The two secret weapons are undoubtedly Terry Crews and Andre Braughner, who are the funniest characters on show. Crew’s should get some sort of award for his facial expressions, and perfectly plays against the type of role you’ve seen him play in big action films. Braughner had proven himself as a dramatic actor, and brings that same level of gravitas and authority to this comedic role. While his tough exterior persista for the vast majority of his screen time, Braughner finds moments to show that Holt does possess a sly wit, and is able to stand against Peralta’s constant stream of jokes. Brooklyn Nine-Nine is the best comedy pilot of the season, and succeeds with a great cast and a production crew smart enough to avoid the darker bits of humor that could derive from a cop show. After two episodes, Brooklyn Nine-Nine is already on firmer ground the some of the best comedies of the past ten years where at the same stage, and has the potential to be the biggest hit of new season.