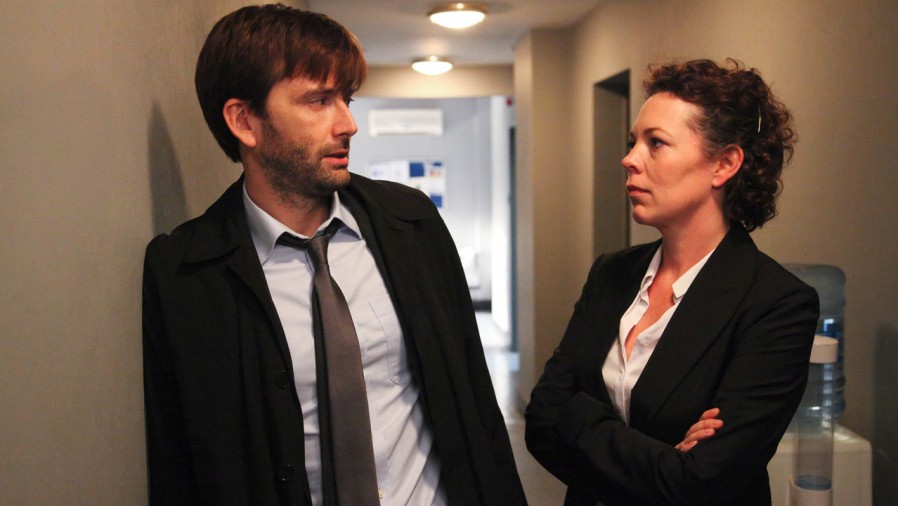 BBC’s Broadchurch, which premiered this week on BBC America, is a bleak look at how a tragedy can shake a seemingly idyllic small town. In the first episode, a local boy, Danny Latimer is found dead on a beach. An investigation is launched as the town struggles to accept such a terrible thing could have happened in their pocket of the world.

The first episode reminded me a lot of the Twin Peaks pilot. A body is discovered, the main detective (or in Broadchurch’s case, detectives) is established, and various townspeople react. The main difference is tone; Broadchurch is much more gritty and not as quirky as Peaks, and seems likely to stay that way.

The show makes use of its stellar cast, taking its time and focusing on a few members of its ensemble. There are some big name cast members who were featured for probably less than ten seconds (Arthur Darvill, I’m talking about you) or were given just a few short scenes. Instead of trying to cram everyone in, the first episode featured most heavily the Latimer family, and the two detectives leading the case, Alec Hardy (David Tennant) and Ellie Miller (Olivia Colman).

From the Latimer family, Andrew Buchan gave an especially strong performance as the murdered boy’s father. Cracks in the family’s foundation are already showing, and there’s plenty of drama to fuel the show for the coming weeks.

Hardy and Miller’s relationship was by far my favorite featured thus far. . Miller was passed over for a promotion- the position being given to Hardy, an outsider instead. There’s tension there, but they have to try and work together in order to solve the case.

I’ve been familiar with Tennant’s work for a while, and he delivers the kind of quality performance you can expect from him. Hardy has relocated to the small town to avoid some unknown scandal in his past. He is an outsider in the small community, and insists on maintaining professionalism; this case is a chance of redemption. Although he advises Miller to “shut it off” and be detached from the crime, he is clearly more disturbed than he wants to let on. These glimmers of humanity beneath the hardened, controlling exterior he tries to present make Hardy an intriguing half of a dynamic pair.

Colman is brilliant as Hardy’s partner Miller. I had seen Colman in supporting or guest roles before Broadchurch, but hadn’t seen much of her work before, something I’ll have to remedy soon. Danny Latimer was her son’s best friend, and she is friends with Danny’s mother. She struggles between her role as friend of the grieving family and professional detective. She’s a link between the close-knit community, and the intrusive outsiders.

Miller is important, not only in her capacity as that link, but in that she incredibly well-rounded character. She makes mistakes, but bounces back quickly and proves she’s damn good at her job. She puts on a strong, but sympathetic face while discussing Danny’s death with his family, or her son, but can admit to her husband she’s not okay. Miller gives the show a soul. She’s trapped in an incredibly difficult position, and tries to make the best of it, even though she’s not sure she can.  I don’t usually watch shows that are this dark (I honestly cried multiple times while watching it), but the writing for Miller and Colman’s portrayal of her convinced me I should watch future episodes.

While I could talk all day about how great I think Colman is in her role, there really weren’t any weak links thus far in the cast. I’m excited to how the rest of the ensemble is utilized in coming weeks as the investigation digs deeper. And while I am curious who the murderer is, watching how the characters struggle and their relationships with each other evolve is ultimately what makes Broadchurch a solid, if very depressing show.