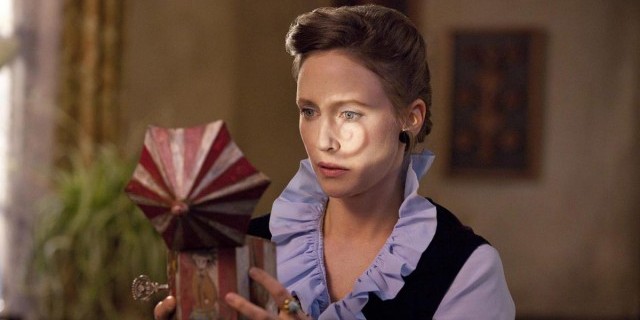 I had absolutely no knowledge on this film going in. I had not even seen the trailers or knew what exactly the concept was. With a name like ‘The Conjuring’ and looking at its poster some fairly accurate guesses can be made about the premise. I thought I was in for another bland, cheap thrill of a horror movie but once the final credits rolled, I could not help but smile and walk out feeling immensely satisfied and if not a little shaken up as well. The Conjuring is well worth a night out.

Talks of development for The Conjuring began over 20 years ago but actual production started just at the start of 2011. After some failed deals and the like, the film was finally picked up by New Line Cinema. Starring Vera Farmiga and Patrick Wilson, the pair plays the protagonists of the film, demonologists/paranormal investigators/part-time exorcists, Ed and Lorraine Warren who are attempting to aid a distressed and seemingly haunted family, the Perron family. Considering how many horror movies follow a similar plot (i.e all of them), it would seem like a very redundant movie but rest be assured that this is not the case.

To sum it up, The Conjuring, directed by James Wan, is a horror film that plays out and feels more like a horror classic but treats its audience as though they have already seen the classics over and over again.  While almost playing homage to its predecessors, the film keeps it creative and fresh. Offering a classic setting, characters, and overall storyline, The Conjuring never tries to be something that it’s not and this includes no cheesy or dumb overuse of CGI or effects. The overall aesthetic of the film is very minimalistic and low-key and this also echoes throughout the musical compositions and this minimalism adds so much more to the scares.

Although there are plenty of pop-up scares, they never exactly feel cheap as the build-ups are so well orchestrated and the suspense is expertly cradled. The whole film is simply creepy and there is more than one time where you will be struggling not to look away or close your eyes. But despite the intense scares, the film is also very fun. The acting at times can be a little cheesy and also the shots too can be so as again, they help harken the film back to its inspirations that came before it but they always do so ever so discreetly. On this point, it should be added that the cinematography is so well choreographed and the shots always add just that much more to each scene.

Although some may say that The Conjuring is too much alike those that came before it such as The Exorcist or The Amityville Horror, at the very least, it does them all justice. A horror film that always keeps you scared, that always fills one with immense suspense, and that does not fall into the trappings of Hollywood today (there will be no 3D version), The Conjuring reminds us what it takes to create a wholesome, fun scare of a film.