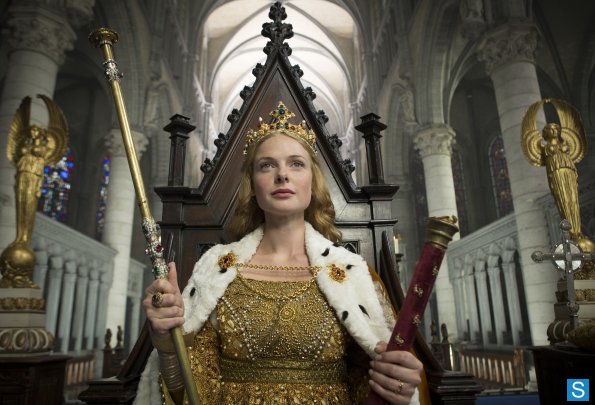 When I heard there was going to be a mini-series about the women behind the War of the Roses, I was psyched. A series focusing on awesome historical ladies? Yes please, that is right up my alley. I spent a good part of my summer reading up on English queens (She Wolves by Helen Castor is particularly good, in case you were wondering). After watching the first episode of The White Queen, I realize I should have stuck with my books.

What was most disappointing was The White Queen has the potential to be a good show- it just wasn’t. The first episode focused mainly on the love story between Elizabeth Woodville and Edward IV. There were several problems with this: one, their love didn’t seem believable enough, and two, Elizabeth doesn’t seem like a significant threat to anyone.

Elizabeth and Edward’s story is based on love at first sight. They barely had any time to talk before they get married. Worse, Elizabeth’s family has traditionally supported the Lancasters (enemies to Edward IV of York), not to mention Edward killed Elizabeth’s first husband.  Suffice it to say she’s not his number one fan when the show starts, and yet, she marries him about half an hour later, without having a chance to get to know him beforehand. At first it seemed Elizabeth might be scheming to make a power grab, but no. It’s love, or at least it’s supposed to be.

The concept of love at first sight is an admittedly difficult one to sell in a visual medium; but throwing in a few sex scenes doesn’t prove there is love. Lust and love aren’t mutually exclusive, but the show did nothing to demonstrate that there was an emotional connection as well as the obvious physical one. Edward’s decision to marry a commoner alienates him from a lot of his allies. It’s a bold move, and in order to make it a believable one, the power of Elizabeth and Edward’s love has to be undeniable, and right now, it’s not.

Also not believable is Elizabeth’s potential as a serious threat, as the promos (and history) made her out to be. She relies on her mother for advice and guidance, partially because she has difficulty making up her mind for herself, and partially because she’s painfully naïve about politics. The War of Roses was not amateur hour. It was kill or be killed. In this series, Elizabeth is supposed to be one of the main players, and at this point, if she didn’t have her mother looking out for her, she would get eaten alive.

Towards the end, a few more characters, like Margaret Beaufort or Cecily Neville, were introduced, both of whom were much more interesting in their few minutes of screen time than Elizabeth for most of the episode. To be fair, Elizabeth had a few moments where she did indeed have a backbone, but those moments weren’t enough. Gradual character development is fine, but if you have a show (one that has only 10 episodes) that is supposed to be about powerful women, you don’t have the luxury of focusing on a protagonist who is struggling that much. I’m sure Elizabeth will figure things out and hold her own. She just needs to do it faster.

While The White Queen is off to a shaky start, it does have the foundations of a good show. There are a lot of talented actors involved, though since the first episode focused so much on Edward and Elizabeth, I only caught glimpses of them. (James Frain as Lord Warwick aka the Kingmaker promises to be especially good). So, large cast with impressive filmography: check. Pretty costumes and sets that are a prerequisite for any period drama: check. Storylines based on fascinating historical events: check. Everything needed for a perfect historical drama is there. Hopefully subsequent episodes will pick up a little bit, and the show will find its stride.

Other Thoughts:
The subplot with Elizabeth and her mother having magic seems unnecessary, especially since it resulted in Elizabeth having weird dreams and waking up in a dramatic fashion more than once. If you do a dramatic waking up more than once in an episode, you’re doing it too much.