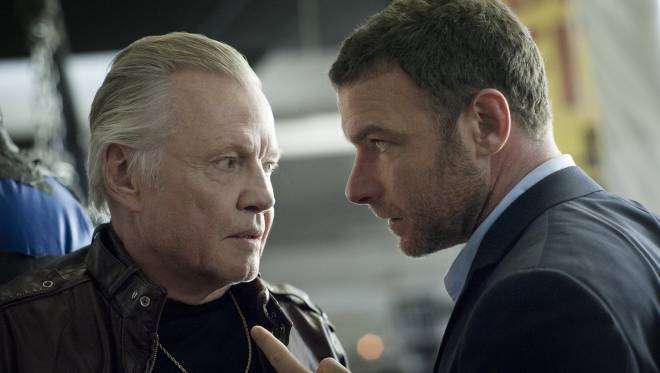 Ok, so I guess I wasn’t as burned out on middle aged white male anti-hero protagonists as I thought I was, because half way through its first season, Ray Donovan has me fairly hooked.

When discussing the show’s pilot episode, there  were several issues that came up. Scattershot plotting, violence for the sake of violence, somewhat uneven focus, and another emotionally conflicted protagonist cheating on his wife. But above all that, the performances from the cast, Liev Schreiber and Jon Voight in particular, elevated the show to a much higher level. It’s the performances that brought viewers back the next week, and for the following six weeks, as the show ironed out and streamlined the various issues that arose in the pilot. At the midpoint of its twelve episode season, Ray Donovan has become a pretty good show.

The pilot seems to suggest that the story structure of each episode would feature the ongoing family drama of the Donovan clan, while also featuring “case of the week” adventures with Ray and his work crew. While there have been many opportunities to see Ray and his crew at work, the main story thrust after the pilot focused on Mickey’s intrusion into Ray’s life and the growing discontent it causes among all the Donovans. Ray’s job as a Hollywood fixer has mainly functioned as a B or even C plot, which are predominately used to showcase the conflicting sides of Ray’s personality. One could say that the lack of character development for Ray’s coworkers is one of the shows failings, but it is called Ray Donovan, not Ray & Friends.

Ray’s wife and kids have also received substantial attention in the first half of the season. From the moment that Mickey walks into their home at the end of the pilot, it sets off a chain reaction within the Donovan house that keeps going even without Mickey’s continual presence. Paula Malcomson plays Abby, Ray’s wife, as woman incredibly bored with her life, and ready to burst after years with her emotional absent, and occasionally adulterous, husband. The show drops hints about her younger, wilder days in Boston, culminating in a fit of kleptomania when she steals some very expensive shows. Abby is not the typical West Coast trophy housewife, and she pretends to fit in but it’s clear that she doesn’t. And Mickey serves as a reminder of her past, and the old personality that she’s been trying to hide.

One of the biggest surprises of Ray Donovan is the further exploration of the other Donovan brothers, Terry and Bunchy. Rather than being small cogs in ever turning Mickey-Ray wheel, Terry and Bunchy have emerged as fully developed characters with their own goals and motivations. Terry is the peace maker; years of beatings in the boxing ring have left him physically weakened and timid. His physical strength was what gave him his confidence and defined his personality, and ever since his neurological condition has robbed him of that strength, Terry has been struggling to define himself again. His relationship with nurse Frances is both touching and heart-breaking, and has seen Terry regain some of his former confidence. When an infuriated Ray pulls a gun on Mickey in front of his children, it’s Terry that breaks Ray out of his anger and takes charge of the situation.

Bunchy, the youngest Donovan, is a tragic character. The horrific abuse he suffered has tainted every facet of his life and personality. He latched onto Mickey because he craves any amount of guidance and affection from paternal figures. Bunchy is trapped between two worlds, he is desperate to create his own life as an adult, but he is trapped within the emotions of his childhood trauma and sabotages every attempt to improve his life. He buys a house, only to quickly attempt to burn it down after experiencing a terrifying flashback to his abuse. When Terry asks him why he doesn’t go back to fix it, Bunchy tells him he doesn’t deserve it. Terry and Bunchy have both been stuck in unhappy situations for years, and the first half of the season has done a great job of displaying their desire for change, and the difficulties they face.

The centre of the show is the conflict between Ray and Mickey, and both actors make it mesmerizing to watch. Jon Voight should win an Emmy for his performance as Mickey, and he steals every episode of the show, regardless of his screen time. The character of Mickey Donovan feels like a rebuttal to the image of the ruthless-yet-noble crime boss seen in The Sopranos and countless other shows sense. Mickey wants to project that image, but the truth is that he just a creepy old guy who corrupts everything he touches only has power over weak willed people. It’s clear that Mickey’s self-image is far far greater than the reality. He is not without any redeeming qualities, and it is interesting to see that he does try to be a good father, especially in regards to Bunchy, but the show demonstrates time and time again that he is simply not even remotely good at it. In one episode, Mickey goes to visit an old flame, the woman he wanted to be with, and it’s truly saddening to see that image of what Mickey wanted his life to be compared to what it became.

Liev Schreiber has the fewest lines of any leading man this side of Don Draper, but Ray is still a captivating character. Other morally conflicted protagonists seen on tv are clearly a large influence on the character of Ray, but that doesn’t take away from the fact that Schreiber elevates his character beyond its “age of the anti-hero” roots. Ray is man who had to take control at a very young age, as every older authority figure failed him and his brothers. He has grown comfortable in his role as Donovan family patriarch, and Mickey’s return rattles him to his core. Ray, like everyone on this show, hides behind a façade of calm, but when he explodes with rage it is terrifying and riveting. A recent episode finally brought the Ray-Mickey conflict to its climax, as Ray pointed a gun at his father’s head and spent several moments deciding wither or not to kill him.  This came at a point in the shows trajectory when stretching out the cold war between the two Donovan’s would start to feel tedious and contrived, and the show was smart to introduce a new element to the fight. Ray travels to Boston to find the mysterious Sully, the old mob boss that his father ratted out, and convinces Sully to come out of hiding to make Mickey disappear. And the actor portraying Sully is James Woods. The show is now building towards a war between two long-standing enemies, who once held great power, and have now grown old and bitter. Jon Voight versus James Woods. I can’t wait to see that.

Ray Donovan is not the most ground-breaking drama on tv right now, but well-paced story telling and excellent performances from all the cast have made its flaws fade into the background and create a captivating first half season of television.