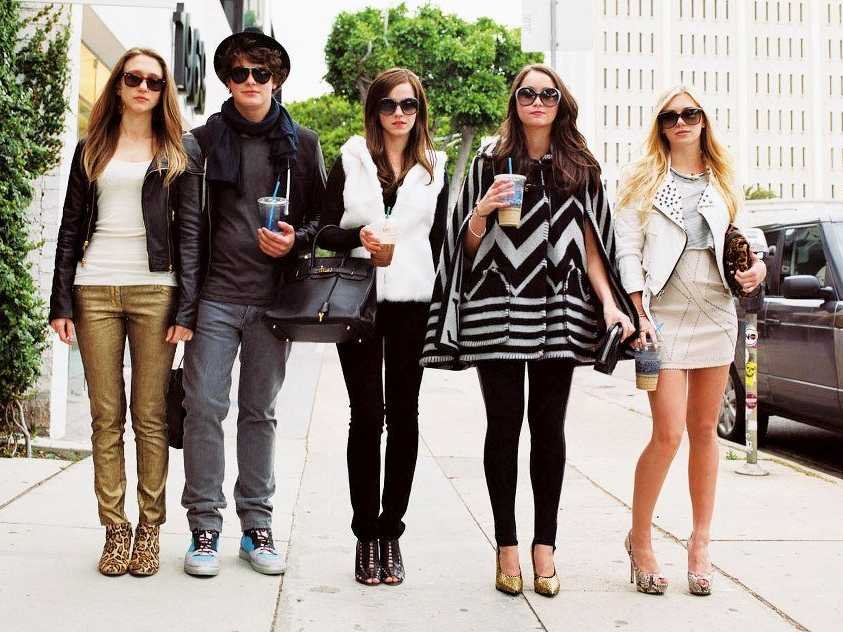 The Bling Ring: Robin Hoods Without a Cause

The catchy premise and the fact that the film is based on actual events boost The Bling Ring’s flashy appeal, providing even the average movie goer (hardly familiar with Coppola artsy work known for its lingering second acts) with good enough reason to buy a ticket. Though, in her efforts to stay accurate to the Sales article (quoting some of the actual thieves’ testimonials, but mostly following the events as they evolved), the film falls short in its plot and character development.

The masterminds, Rebecca (Katie Chang) and Marc (Israel Broussard) — carefree teenagers with obvious lack of parental supervision and severe celebrity obsession — begin their unlawful quest with casual theft of wallets and credit cards left in the compartments of unlocked cars in the area of affluent Loss Angeles neighborhoods. To challenge their “skills”, shortly after that the two young thieves aim for the homes of Hollywood celebrities who have temporary vacated the premises due to travels or other job-related duties. Succeeding in their first mission (burglarizing Paris Hilton’s house), snatching cash and a few high-end designer goods, the two little burglars proudly announce their fortune to another group of celebrity worshipers, Nicki (Emma Watson), Sam (Taissa Farmiga), and Chloe (Claire Julien) who join the gang tempted by the quick cash, designer goods, or simply for the experience of being in the homes of their beloved stars (potential burglary victims: Orlando Bloom, Rachel Bilson, Brian Austin Green, and Lindsay Lohan). In their aimless quest, however, the thieves get carried away by their greed and as more people get involved, things get out of control, leading to a well-known climatic resolution foreshadowed at the beginning of the film.

Known for her lingering plots inhabited by characters without a clear agenda, Coppola is true to form here. Atypical of her work, however, is the existence of one-dimensional leading characters. Her focus on the facts surrounding the burglaries (rather than the actual objectives of the modern-day Robin Hoods) gets carried away, robbing the story of its necessary subplots likely to contribute to the film’s depth and character arcs. In the end, what the film leaves us with is a giant commercial for Louis Vuitton, Prada, Victoria’s Secret, Rolex, Gucci, Marc Jacobs etc., intercut by heavy clubbing, aimless car rides, and Facebooking where the designer products are appropriately showcased.

Of course, we have to keep in mind that the “bling” world recreated in the film– where young teenagers and their parents religiously follow celebrity gossip and study the “canons” of Rhonda Byrne’s The Secret– is a reality. Therefore, it’s to be expected that the characters are portrayed as narrow-minded, self-centered soulless manikins. Interestingly, reading Sales’ article provides us with a lot more insights from the thieves’ testimonials regarding their desires, objectives and family struggles, somewhat humanizing the troubled kids and justifying their actions. Sadly, this aspect of the film is completely missing.

Coppola’s unconventional camera work accentuating the beauty of youth, the incredible accuracy in her depictions of Hollywood reality, and a spot-on cast convincingly portraying the real-life convicts make the film admirable in execution, yet The Bling Ring’s lack of purpose clearly leaves no room for thought and the memory of it all vanishes as soon as the credits start to roll.