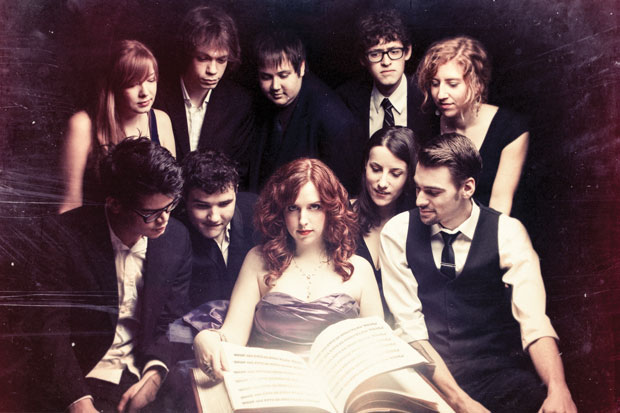 Shannon Graham and the Storytellers

Resplendent in a purple pixie gown, Shannon Graham stands out from her band. They are clad in the trademark black suits of the gigging musician, all in varying stages of disarray. We are gathered in Gallery 345 to celebrate the launch of Graham’s new album.

My first impression as I walk in is of Leonard Bernstein. Something in the sinister, looming ostinato of the piano and the jarring rhythmic structure of the strings conjures an alleyway chase scene and the sound is—paradoxically—warm in this spartan space. The brusque scherzo rhythms and frenetic shots off dissonance are mature and sophisticated, and Graham’s tenor sax reigns high, winding throughout but refusing to dominate.

The tentet moves through the set with a practiced familiarity, and pianist Chris Pruden tells me at intermission that this is because they have been intimate with this material for some time; Shannon Graham and the Storytellers was recorded last summer. There are a wide variety of incarnations of the band—freed from the confines of a more restrictive orchestral space, the musicians trade places with impunity, entering and exiting the stage to the whim of Graham’s songwriting. After she introduces her second piece, a meditation on “the different stages of sleep in the dream cycle,” Graham herself leaves the stage to sit poised on the edge of a plastic chair, silently mouthing each note as it is played.

When asked, Graham agrees that her compositional style tends toward the cathartic. Themes of Buddhism, mental illness and death pepper her work and she admits a trend of exorcising sentiment through her music. ‘Spiders’, a curious little track dedicated to her arachnophobia, is a tight breakbeat drum-and-bass scarcely two minutes in length—the band rips through it at a frenetic pace, bassist Matt Fong bent over his instrument like he’s wrestling with a stubborn furnace door.  Elsewhere, her ‘Variations on a Theme of a Fear of Dying’ sprawls endlessly. She tells us the story of its genesis- a restless night spent on a Greyhound while passengers around her discussed the history of bus accidents. Angry tri-tones (imitating car horns) pepper this lengthy piece, otherwise characterized by the rhythms of night travel and the sensation of rain lashing on windows.

At the risk of erring on the side of the metaphysical, Graham’s writing is not above the mundane: ‘Stop That Dog!’ provides a small break in the mire of contemplation—an evocative, symbolist piece about chasing down a lost dog on a Parkdale afternoon. But then she is back in the whirling maw of human experience with ‘We’ve Come To Take You Home,’ richly wrought like a film score as it charts the experience of death by drowning. Inspired by Benjamin Britten’s opera Peter Grimes, the audience hears the harrowing temptation of suicide in a siren-like refrain. The strings whirl drunkenly and the brass swell in a horrific nausea like a frightfully tossed sea. “All of the things I am about to tell you are shameless lies,” she says, quoting Vonnegut as she introduces ‘The Truth Seeker’, a piece that lovingly satirizes the inherent ridiculousness of modern theological debate.

Graham’s writing demonstrates a strong confidence in her players and she admits that she was writing parts with each specific musician in mind; this comes across in the performance. Sophisticated flourishes and passages of excess are buried deep in the mix and where a lesser musician would have pushed these ideas to the fore, Graham is content to let the totality of it ebb and flow about her. Conveying complex, succinct theme with a largely instrumental palate is a difficult task and her work ably demonstrates a firm grasp of the material.

The design of the record itself is surreal, tightropes chained to the necks of impossible beasts and butterflies swirling around human-animal hybrids. It is appropriate for the myriad layers of Graham’s compositions. I arrived expecting to hear orchestral jazz, a reductive dissonance daring its audience to misunderstand its machinations. Instead I was greeted by the work of a confident, mature composer with a firm grasp of a wide variety of genre conventions and a clear idea of her own ability to elaborate upon them. We will follow Graham’s career with interest.