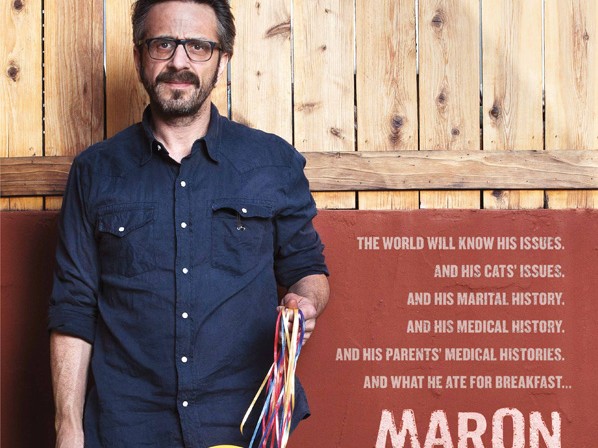 “How are you, my little angry difficult misunderstood friend?”

I am Marc Maron. I don’t mean literally, but metaphorically. If you had told me five years ago that the person I would identify most with- whose personality and thought patterns come closest to my own- would be a 49-year-old, twice divorced, recovering addict, bitter, angry, stand up comedian from Albuquerque, I would have laughed in your face. Marc Maron had little hope for himself five years ago. He was broke from a divorce, fired from his job on Air America Radio, and floundering career-wise after twenty five years as stand up comedian. Maron had gone from 90’s alt comedy forefather ready to break out big, to a barely working comedian after mainstream success seemingly passed him by. In this moment of desperation, he created WTF with Marc Maron, a podcast recorded in his garage where he would interview other comedians, and have a safe space to go on rants and vent his frustrations. Within a year, the show had taken off, fueled by Maron’s honesty and hilarious insights, and the fact that his past as a self-admitted asshole gave a lot of his interviews an attention grabbing edge. Since WTF began in September 2009, it has become a modern comedy institution, with Maron himself being dubbed the “Oprah of comedians” and undergoing an incredible career resurgence. This has culminated in the premiere of the self-titled tv show Maron on the IFC network.

The first episode of the show finds Maron playing a heavily autobiographical version of himself, meaning he is Marc Maron, host of WTF and stand up comedian. The opening shot is nice homage to Annie Hall, which finds Maron addressing an offscreen character, so really the audience, and gives people an immediate glimpse of his awkward and needy, but all together sweet, personality. The rest of the episode finds Maron dealing with one of the true scourges of the modern age: internet trolls. Maron is driven to the point of madness by these online naysayers, something which real life fans of Maron can see on his twitter feed on a semi-regular bases. Dave Foley appears in this episode playing an irresponsible and somewhat boorish version of himself, to hilarious effect. After a particular nasty exchange, Maron tracks down one of his haters through facebook and brings Dave along to confront the troll. Maron finds his hater at a nearby comic book store playing Dungeons and Dragons. This is where the episode feels like it’s going to rely on the old trope of “look how scared and nerdy these nerds are” but instead, they continue to attack Maron even when he’s standing in front of him. They point out that Maron is really the crazy one for going to such lengths to track them down, and it’s really his own issues with anger and self-esteem that need to be addressed. That sounded really serious, but it’s funny, trust me. The tension is only broken when Foley enters and the trolls are enamored with him because his past on Kids In The Hall. Foley, hilariously, couldn’t be happier to indulge them as they recreate classic Kids bits, much to Maron’s chagrin.

From the time it was announced, Maron has been compared to Louie, the critically acclaimed show created by Maron’s long-time friend and sometimes frienemy (I hate that word) Louis CK. This comparison falls a bit flat, as Maron does not strive to include the many absurdist elements that Louie does, but both shows try to use humor to explore the sometimes unpleasant aspects of their creators and say something about them that is true and relatable. Maron is acknowledging his own faults, while also expressing his own unique world view, and it is very fun to watch.

I really enjoyed Maron, which isn’t surprising given that I’m been of fan of WTF for years now. I was worried that Maron, with his self-acknowledged lack of acting experience, might end up being the weak link in his own show, but he was able to hold scenes together and seemed very comfortable in his role, which is helped by the fact that he’s playing himself. The segments where Maron gets to have mini-monologues and riff with guest comedians is where he really gets a chance to shine. IFC put up a preview of a later episode where Maron goes back and forth with fellow comedian Dennis Leary, and Maron is able to make it funny, awkward, and poignant all at the same time. Maron is a good show and definitely one that people should check out. Just like Marc Maron himself, it might get a little heavy at times, but it’s always funny.