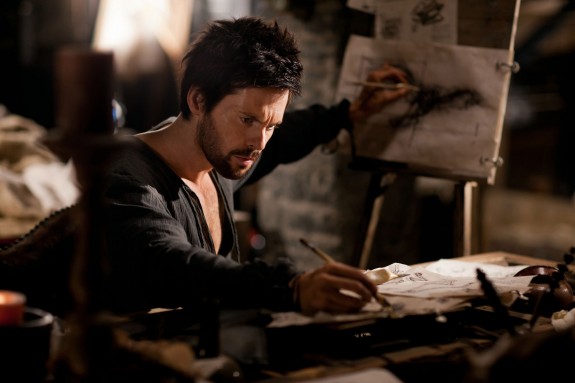 “You are bright, but there is an ocean of knowledge that is still hidden from you.”

Da Vinci’s Demons airs on the STARZ network, and aims to tell the story of young Leonardo Da Vinci, inventor, painter, genius, and, judging by his portrayal on the show, huge jerk. Seriously, the Da Vinci that we’re supposed to cheer for is rude, egotistical, and incredibly arrogant. There is scene where he is attacked by the henchman of his disapproving father, and I felt actual joy when Da Vinci got the crap beat out of him. Not the best reaction when the lead character gets assaulted, I know, but I found him to be almost insufferable.

The world that Da Vinci lives in is an intrigued-filled version of Renaissance Venice. He already has created a reputation for himself that has earned him a few admirers and even more detractors. He gets his big hero moment when he saves an enigmatic Middle Eastern man from a brutal beating. In return, the man takes Da Vinci on a strange psychological, drug filled journey and instructs him to find the mysterious “Book of Leaves”. This encounter brings Da Vinci to the attention of the show’s big villain which is – DA DA DAAAAA – the Pope. The Vatican and its inhabitants are portrayed as vile and despicable murderers on a quest for power, who will kill anyone who gets in their way. They are so extreme that it broaches on a comical level of villainy. In one scene the Pope is taking a bath with a young man and engaging in some weird sort of knife foreplay. His henchmen enter to inform the Pope of Da Vinci and his knowledge of the “Book of Leaves”, followed by the hapless young bather getting his throat slit for over hearing the mere mention of the book. There are a couple similar scenes throughout the pilot, and it got to a point where I wanted say: “Ok we get it. They’re evil”.

On technical level, Da Vinci’s Demons just feels adequate. It’s shot well enough, and the smaller sets are convincing. Problems emerge when the show travels to larger locations filled out with shoddy CGI. I hate to nitpick about this, as every show requires suspension of disbelief when it comes to special effects, but it seemed that Demons was trying to show off when it really had no reason to. The show’s biggest technical achievement is what could be called “Da Vinci Vision”. He releases a bird from cage in order to study its motion in flight, and the camera slows down to a crawl. The bird is replaced by a series of rough sketches as it drifts through the air, showing how Da Vinci can analyze and perceive every muscle twitch and bit of motion. It was one of the best moments in the whole pilot, and gave the audience a chance to literally  view the world the way Da Vinci does.

Da Vinci’s Demons is created, written, and directed by David S. Goyer, whose work you definitely know. He co-wrote The Dark Knight Trilogy with Christopher Nolan, as well as this summer’s Man of Steel Superman film. Goyer is a very talented writer, but there seems to be a pattern where he does his best work as part of team. The projects he works on with partners, Batman, Blade II, Dark City, are excellent, while his solo projects, Flash Forward, Blade: Trinity, can come off as jumble of ideas in need of focus. Da Vinci’s Demons seems to fall into the latter category, but it’s hard to judge from a pilot. First episodes are tricky enough, let alone ones that have to set up entire fantasy worlds filled with concepts unfamiliar to audiences.

The longer I watched the pilot, the more I was reminded of 90’s syndicated action-drama classics Hercules: The Legendary Journey and Xena: Warrior Princess. Each was set in over the top of anachronistic historical world, each had unmerciful and deadly villains and each had a serious element of cheese and trashiness. Da Vinci’s Demons takes this trashiness to cable network extremes, with violence and nudity throughout. It’s like a mash up of Xena and HBO. Maybe if I had gone into Demons thinking more Warrior Princess and less Game of Thrones, I would have been much more open to it.

I wanted to like this show. I really did. It seem like it could be the perfect mash up of two of my favourite things, history and Batman. Unfortunately, Da Vinci’s Demons comes off as a confusing mishmash of a show. It’s possible that in later episodes it will become more focused, but in the pilot episode it seems confused and unsure of itself. There is some potential here, but there’s a long path that Da Vinci’s Demons has to take to reach it.