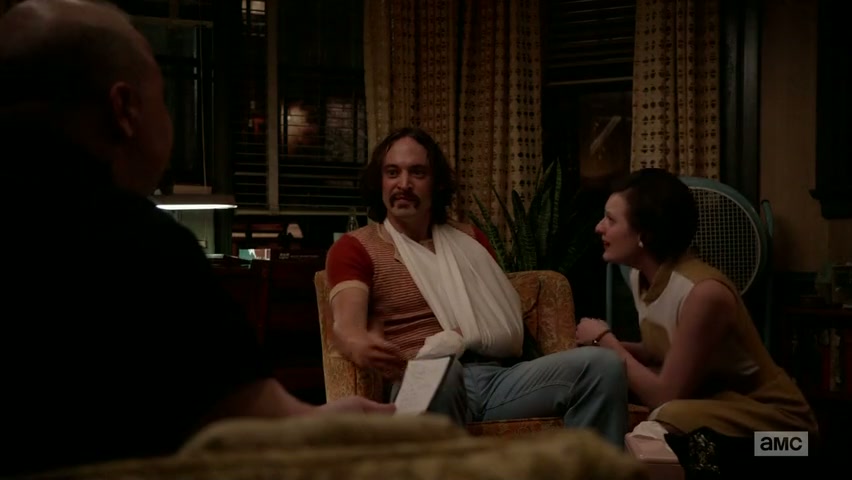 After the craziness of last week’s drug fueled fever dream of an episode, Mad Men returned to some straightforward story telling with familiar tales of casual infidelity and accidental stabbing. We start in a meeting with Don, Ted, and Peggy, as they go over an upcoming pitch, while the two bosses squabble over whose idea to use. Peggy, who is smart enough that heir no good side to choose when bosses are fighting, continually positions herself in between the collected ego of Don and Ted.

Peggy’s rough day continues when she arrives at her dump of an apartment to find an injured Abe being uncooperative to a NYC police officer. Apparently Abe was mugged on the subway, and was stabbed in the process, but is now refusing to provide details about his attacker, particularly the ethnicity. Abe has entered full on 60’s radical mode, and rants about the police state that they will soon have to rise up against. Peggy is at odds with this vision, because it conflicts with the stable life that she wants for herself and has worked so hard to create. After a rock gets thrown through a window, Peggy builds a makeshift spear, and when startled by Abe, jumps and stabs him with it. The scene of them in the ambulance was one of the funnier scenes on the show this season, as crazy as that sounds. In a priceless moment, Peggy asks the EMT if Abe is going to be ok, and gets only a shrug in return. Abe breaks up with Peggy right there, and says that she stands for everything he hates. The end of her story this weeks, finds Peggy alone, stuck between all the men in her life.

This season, Mad Men has put particular emphasis on the past, and so it only makes since that at some point Don and Betty would relive the insanity and anger that was their marriage. Bobby Draper has been away at camp for the summer, and Don and Betty both make the trip spend the last day with him. Betty has lost the excess weight that has plagued her for two years, and ditched her recently darkened hair. Now, in shorts, and with her blond hair in bob, she looks the same as when Don married her. Don likes to put people in boxes, and once they are in those boxes it’s next to impossible for them to escape. Betty managed to escape from her box, at the cost of her marriage to Don, but now, with her new husbands run for political office, it seems like Betty has stopped her slow progress towards having her own identity and returned to the role of the stereotypically perfect housewife. Don sees her back in the role that he always wanted to play and he has to have her. This gives Don a chance to give post-coital speech about the difference between sex and intimacy, about how having one does not always have to imply the other. The next morning, Don awakes to find Betty with her new husband Henry, seemingly happy, while he is the one he had to wake up alone.

The final subplot follows Roger on his descent straight into useless old guy territory. He takes his too-young grandson to see Planet of the Apes, failing as most do who try to emulate Draper, and terrifies the boy, and then barges in on Joan and Bob’s day date, only to be told that he is not the father that Kevin, his secret child with Joan, needs. I mention this all so I have the chance to ask WHO THE HECK IS BOB BENSON?!

Poor, sad Megan. She really hasn’t had much to do this season. Her primary actions have been struggling on her soap opera, being a terrible step-mother to the Draper kids, and watching her marriage slowly breakdown as her husband has an affair with one of her only friends. Now while all that could make for compelling character drama, when it’s dragged out over eight episodes it feels very sloooooooow, even by Mad Men standards. Her primary scene in this episode even had a moment of meta-commentary on her characters predicament on the show. Megan’s soap opera co-star arrives at the apartment, and Megan immediately begins to pour her heart out to her. This is the moment her co-star decides to lean in and kiss Megan, instantly reminding everyone that this is the woman who wanted Megan and Don to swing with her and her husband. Megan rebuffs her advances not once, not twice, but three times, in one of the funnier scenes on Mad Men this season. She then points out the obvious nature of Megan’s scene, she actually calls it that, as the sad lonely girl.

The character of Megan has definitely taken a step into the background of the show’s cast, which feels surprising considering the prominence her character enjoyed last season. Back then, she took on challenges, quit her unfulfilling job, wallowed in the depths of wannabe actors, got a shot at her big break, and even did the impossible: made Don Draper change, even if it was only temporary. This season, Megan seems to be stuck and is very unhappy about it. It harkens back to the old Betty of season one, stuck in an increasingly loveless marriage, but still trying to keep up the façade. On a show as obsessed with the past as Mad Men is, this must be entirely intentional. It shows how strong Don’s desire to put people into certain roles is, and how he wants his wife to play a certain role. He tried to change, and be different, but everything always comes back around in the end. Now it’s Megan’s turn to be stuck, and compared against Betty’s presumed freedom, in the role of the woman who love Don Draper the most, which means she interests him the least.