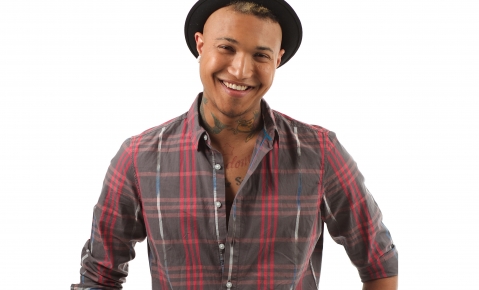 One of the most inspirational TV personalities of the year, Jamar Rogers overcame addiction and joined Team CeeLo, becoming a rare openly HIV-positive role model in the music industry. Over the course of The Voice‘s second season, his strong performances and daring arrangements made Jamar an artistic standout while his relentlessly positive attitude and indomitable charm made him a fan favourite. His controversial elimination just before the Top 4 finals is credited with the rule change that now allows multiple finalists from the same team.

As he prepares for the July release of his debut album, the Best Reality Star My TV Award nominee took a breather from his crazy-busy schedule to talk to us about life, music, The Voice and CeeLo Green.

Who was the first musician whose work you remember loving?
I’ve loved Crystal Lewis (a Christian singer) since I was seven or eight. I used to cover her songs in church until my voice changed.

When did you realize you a) could sing and b) wanted to sing professionally?
I realized my love of singing at six when I sang at school. I didn’t take it seriously as a profession until about four years ago. I jumped into the game a little late.

Were you always so clear in your personal and musical style or was that something that came with time?
My style has changed 100 times. I feel like I’m at a place where I’m writing music honestly and that feels good. Honesty has become my genre.

What made you audition for The Voice?
I auditioned for The Voice because all of my friends were badgering me. My homegirl even had a dream I’d be on. When she told me that, I was like, what do I have to lose? Besides, I really, really wanted to meet CeeLo.

What’s it like on Team CeeLo? Do you think you would have made it as far (or maybe farther) with another coach?
I really believe everything happens for a reason. I was supposed to learn from CeeLo. If I had been on Blake’s or Adam’s team, would I have made the finals? Maybe…but I try not to waste time with the hypotheticals.

Your attitude was one of the best I’ve ever seen on TV. Do you feel like what the audience saw was an accurate snapshot of how you live your everyday life?
Yeah I believe I was portrayed honestly. Even when I have a bad day, I’m smiling. I guess it’s a defense mechanism.

You’ve been very open about your history with addiction and your HIV-positive status. In what ways does your status as a role model fuel your drive to succeed in the music industry (and thus gain more visibility and reach more people)?
Well, I feel like I’m not just doing this for myself anymore. There are kids born with HIV that have no viable HIV-positive role models. This isn’t the 90s anymore, most of these kids have no idea who Magic Johnson is. When I went to South Africa (where 1 in 4 African men are living with HIV), I saw how people desperately need to see a successful HIV-positive person. I want to succeed for all of us, but most importantly I want the HIV community to succeed as well.

What was the best piece of advice CeeLo gave you on the show?
He said sing songs that the middle of the country would appreciate. Hence the Foreigner and Bon Jovi covers.

How did you choose your songs each week?
Actually I didn’t choose any of the songs. CeeLo told me what to sing and that was that.

You stood out as one of the only contestants who did their own daring arrangements. How did you approach interpreting each new song?
I listened to each song about 100 times, then I would ask myself, if I wrote this song, how would I want it to sound?

What would you say are your greatest strengths and weaknesses as a performer?
My greatest strength is I put every ounce of emotion I have into performing a lyric. My weakness is the terrible stage fright I get right before each performance. I’m not usually comfortable until song number 3 or 4. I get sooooo nervous.

Tell me about the other contestants- do you keep in touch with many of them?
I loved Cheesa and James Massone. I speak with them to this day.

In your season, one member of each team made the finals but they changed the rule in season three so that the top vote-earners made it to the finale, even if they’re from the same team. General opinion is that your elimination sparked that change. Thoughts?
People say that my elimination had to do with the rules changing, but again everything happens for a reason. It wasn’t for me to win that show, no matter how badly I wanted to. I understand that now.

What’s been the effect of The Voice on your career?
I didn’t have a career before The Voice. [Laughs]. I was singing at benefits and weddings in NY and walking dogs. The Voice gave me a career.

Did you watch season three? Did you have any favourites?
I watched all of season 3 and blogged about it for The Insider. I knew Cassadee Pope was going to take it from the beginning.

If you’d been responsible for filling CeeLo’s vacant spinning chair with any artist in music history, who would you have picked?
Janis Joplin.

What have you been up to since the show? You’re working on an album, right?
My album is out this summer. You’ve never heard anything like it. It’s taken a year to finish because I wanted it to be bold and creative. If I only get one shot at this, I want to make a masterpiece.

Is there anything you’d like to add?
I’d like to add that anything in life is possible. Your amount of belief determines the outcome.