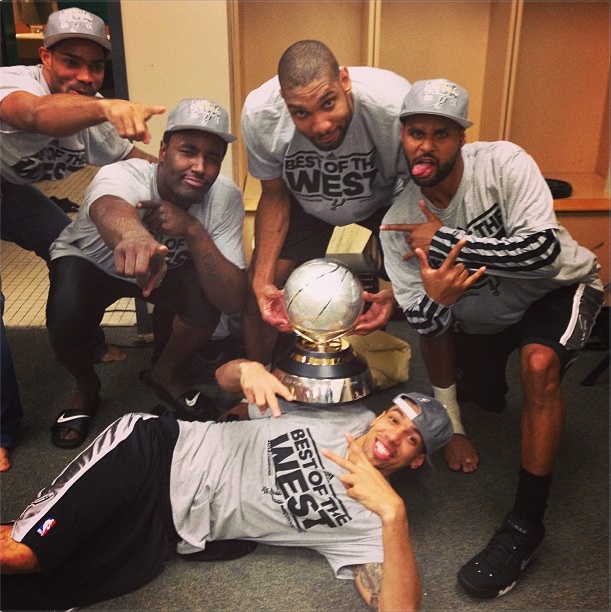 How the West Was Won

The Western Conference playoffs started with a bang and ended in a whimper.

Not to say the Spurs put down the Grizzlies without a fight, because the noble bears certainly mounted a worthy struggle, but after the first two dominating games, there was no competitive tension left in the series, the San Antonio victory already sealed. For the Michael Myers styled Spurs, it was business as usual, another sweep in their increasingly impressive playoff portfolio. The great Western Conference shootout, on the other hand, started as an every man for himself bloodbath, a tumultuous turnout that looked like it could shake any way, given the right ball drop, and ended in inevitability.

The only first round series that didn’t go six games was the Spurs’ decimation of whatever zombie squad remained in Laker uniform. Going in, the narrative was whether or not Dwight Howard would step to the plate in Kobe’s absence, but this was hardly a fair test. Without half of their primary rotation, these Lakers never stood a chance, Howard maturation or no. For the record, he didn’t do anything to deserve his self-appointed Superman logo or upcoming max contract, but again, they had no shot at survival.

On the other side of Staples Center, the Clippers faced off with their rivals of the past few post-seasons, the Grizzlies. While Chris Paul, as always, put them within puncher’s reach of advancement, their secondary star, Blake Griffin, ground down like clockwork, the same disappearing act he’s pulled every playoffs. Sure, he was injured, but it didn’t matter. Even healthy, Griffin can’t stand up to Marc Gasol and Zach Randolph for a full series, they’re too big and way too mean. Instead of puffing out and matching the bullies, Griffin turns tail and gives his best lemon face to the officials. Until he finds a way to overcome this tendency, the Clippers will never be serious contenders.

Meanwhile, down Texas-Oklahoma way, the Thunder and Rockets battled over the significance of the James Harden sized hole on the Thunder bench. Now leading the upstart Rockets, Harden set to prove himself a legitimate first option; Kevin Durant and Russell Westbrook sought to cast the precocious would be contenders back to their rightful place at the end of a long line of successors.

Midway through the Thunder’s lesson, Westbrook went down with a torn meniscus, giving the Rockets breathing room to squeak off a few wins, but not enough to overpower Durant’s scoring barrage. Unfortunately for the Thunder, the injury doomed their championship chances; Durant is a peerless scorer, but he does not have enough artillery alone to deliver his team to the promised land. For Westbrook apologists, this was a strike against his absurdly vocal and numerous critics. For basketball fans, we lost the best chance at avoiding a Heat repeat.

Elsewhere, another young band of upstarts, the Warriors, struggled to prove themselves and did the Rockets one better- they succeeded. In one of the strongest series yet in the playoffs, Golden State traded blows with the Denver Nuggets in an epic slugfest between two undefined teams full of raw talent. Establishing quick transition buckets, athletic finishes at the rim, and jaw dropping jumpers as the norm, every game was closely contested and individual match-ups proved equally stacked. The difference maker was the one genuine superstar on either roster: Stephen Curry. Emerging as a truly transcendent athlete, somewhere down the stretch of another insane shooting streak, I began to believe, like only the best can beget, that Curry would make any shot he threw, complete any play he deemed worthy of his otherworldly skill. George Karl, coach of the Nuggets, thought he could compete for a ring without a ringer; Curry proved him dead wrong.

As strong as their showing was, the Warriors only beat the Nuggets, not a real contender. In the next round, they were pitted against a true threat in the Spurs. Curry and his hotblooded compatriots, namely sophomore Klay Thompson and rookie Harrison Barnes, did their best to shoot the lights out again, but their act was far more effective against a transition team trying to mimic the same rate of play. No matter how exuberant or athletic the Warriors were, the Spurs had a time tested answer, a defensive anchor to every high flyer.

Before San Antonio’s grinding defense wore down the Warriors for good, they managed a few classic contests, most notably the Game 1 double overtime thriller. It’s a credit to how much potential Golden State’s roster has that they fought as well as they did, against such an established team. While the series was competitive, maybe the most exciting of the Conference, once Tony Parker and Tim Duncan found their A game, the West became no country for young men.

On the other side of the bracket, the Grizzlies feasted on the wounded Thunder, exposing Serge Ibaka’s weakness as a depended upon scorer and Kendrick Perkins’s growing irrelevance. Against that meager paint defense, the Grizz looked mean, ready to rip their next opponent wide open. I had them penciled in for the Finals, talking up how much damage Randolph and Gasol would rain down on Bosh and Battier.

It was never meant to be. Instead, Duncan bolted from the grave, Parker took flight, and role players like Danny Green and Tiago Splitter stepped up when the Spurs needed it most. Over four mostly contested games, San Antonio proved themselves the better team, the best of all Western teams to challenge the great Eastern threat. While the series seems back and forth between the Pacers and Heat, barring serious injury, I have no doubt Duncan and friends will face Lebron James and his riders of the small ball apocalypse in the Finals. They’ve proven themselves more than game so far, but the most difficult challenge remains.

To beat the Heat*, the Spurs will need every last trick in their saddle bag. No longer riding on endurance and familiarity alone, they carry the blessings of the rest of West. As a united, fallen fanbase, we harbor plenty of animosity towards the Spurs, of course we do, but nothing close to our ire at those Miami Beach slicksters. Don’t let our teams go down in vain, use our fallen strength to defeat the Evil Empire. Tim Duncan, you’re our only hope.

*I don’t see it happening, but I have to include (or the Pacers) to avoid a possible jinx/hex.