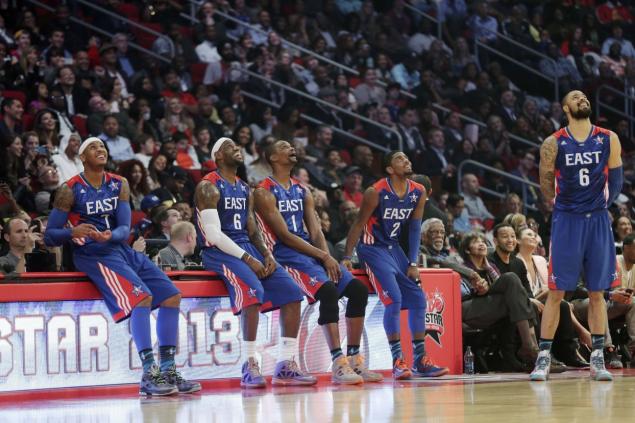 The NBA season is winding to a close but the playoff picture is incomplete. With many significant teams still jockeying for position, the squads best poised to play through June are already clear. You may say it’s early, that I’m too quick to be dismissive, or that my analysis is erroneous. All these are fair. Too bad; let’s start with the East.

Miami Heat
The reigning champs, they’re playing like it, with Lebron James’s playoff emergence as the alpha dog and Dwyane Wade’s acceptance of sidekick status carrying over into this season. More fluid, more committed to small ball and fast breaks, their offseason shooter acquisitions space the floor and they near the potential juggernaut first heralded in 2010. Any championship talk starts with and usually ends with the Heat, for good reason. Right now, it doesn’t seem likw anyone is taking them in a seven game series.

Chicago Bulls
With the players currently active for the Bulls, they stand no chance of beating the Heat. Their contender status is dependent on a Derrick Rose return and whether or not he can play at the same level as before his injury, which is unlikely in itself. The rest of the roster is an efficient, defensive minded cast of role players, a perfect complement to the explosive superstar necessary to provide offensive punch in the playoffs, but not a standalone squad capable of surviving four series.

Indiana Pacers
The Pacers gave the Heat trouble last season and they look ready to do it again. Their problem, however, is similar to Chicago’s. With a collection of sidekicks, though talented in their own right, they lack the go to guy closing out games. Roy Hibbert and David West won’t step up for it and while Paul George has been playing well, it’s uncertain how Danny Granger’s comeback will affect him. Like the Bulls, this team’s threat level is set to wait and see.

New York Knicks
Despite their hot start out the gate, the Knicks are not a legitimate league leader. They boast about defensive lockdowns and get there some of the time, but the perennial sieves Carmelo Anthony and Amare Stoudemire bring more trouble than Tyson Chandler can handle. A streaky team, if their shooters get hot, especially J.R. Smith and Steve Novak off the bench, they are capable of winning games with the threeball alone. The question is whether or not they could maintain that momentum through June, the likely answer being no.

That’s It
The Nets? The Celtics? The Hawks? Those teams are too old or too talent deprived to keep up with the young guns. They might make a rumble or two, but none of them are real concerns.

A less determined field, the West is wild and free, full of franchises that can make plenty of noise in the playoffs, given the right momentum surges. Let’s take a peek, shall we?

Oklahoma City Thunder
Like the Heat in the East, the Thunder are the default team to beat. The Spurs may have a better record (for now, but watch for the Thunder to move up a spot given Tony Parker’s four week injury), but the Thunder have shown they possess the athleticism, the determination, and the cutthroat closing ability necessary to prevail. Critics point out a lack of James Harden, but the bench scorer mantle is worn well by Kevin Martin and both Kevin Durant and Russell Westbrook have more ball to operate with. While Harden is a very good player, the more Westbrook and Durant do on court, the better the Thunder.

San Antonio Spurs
The Spurs are the Michael Meyers (the Halloween serial killer, not the comedian) of the NBA. They are slow, methodical, and more often then not, they will straight up murder you. Just when you think you’re done, they bolt up from the grave, stronger and more determined than ever. Despite the injuries, the changing of the guard, and the league’s transition to uptempo small ball, the Spurs keep driving, keep killing, fueled by Coach Popovich’s brilliance instead of bloodthirst. The smart money is on a bow out before the Finals, but if I were Durant and company, I’d sleep with one eye open.

Los Angeles Clippers
As a lifelong Laker fan bitter against the turning tides of bandwagoneers, sick of seeing strutting Chris Paul and Blake Griffin jerseys take over my town, I am incapable of objective analysis of the Clippers’ playoff chances. Luckily, they take care of their own ceiling by playing a brand of basketball best suited for the regular season, all quick transitions and feasting off turnovers, a style that often falls flat against the grind down defense seen in the postseason. There’s enough talent here to make them a tough out, but a generous forecast sees them lose in the Western Conference Finals.

Memphis Grizzlies
The Grizzlies are the Hawks of the Western Conference. They’re talented and have enough punch to put the scare in a team or two, but as constructed, they will never reach the NBA finals.

Denver Nuggets
So much young energy, not enough certainty. It’ll take a few years, but they might be able to pull off a solid squad from this core.

Los Angeles Lakers
Scoff all you want, but it’s possible. Likely? Not a chance. But I would be turning traitor if I didn’t at least mention them in the article.

Finals Prediction
The Heat and Thunder will have a rematch of last year and Lebron will triumph again. Durant and Westbrook will put up a better fight this time, maybe even taking the series to seven, but look for another ring to grace the King’s fingers.