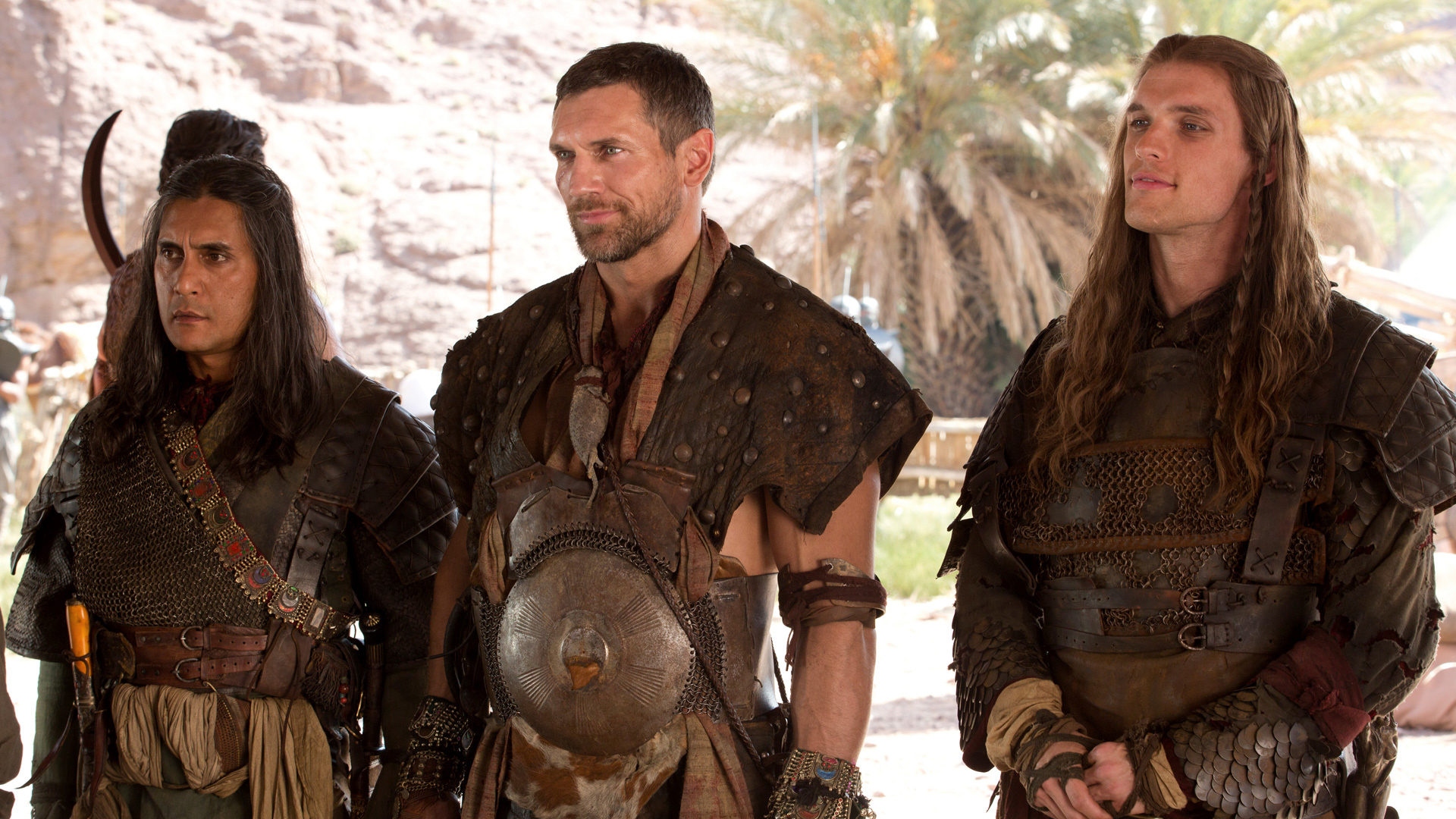 Tyrion and Sansa’s wedding is a family reunion that no one wants to attend. Devastatingly awkward, the lavish event involves a drunk uncle, an uneventful wedding night, and an attempt to cut off someone’s genitalia. Despite the awkwardness, the episode itself seemed more focused than usual, mainly revolving around Yunkai, Dragonstone and King’s Landing. All in all, the events were exciting television, but for those of you at home waiting to see Robb, Jon Snow, Ygritte, Brienne, Jamie, or Bran, perhaps try again next week. For those of you pulling for a romance between Sam and Gilly, the big guy might have a stab at it after all.

Where the forest meets the field, young Arya wakes up after being captured by The Hound in the last episode. Quietly stirring, she spots her prison guard sleeping near a tree. Making her way over to him, she picks up a basketball-sized rock and raises it above her head. As if she’s taking aim to drop the mini-boulder on the man’s scarred face, she stops as he speaks with his eyes still closed. “I’ll give you one try, girl,” begins The Hound. “Kill me and you’re free. But if I live, ill break both your hands.” After a moment of hesitation, she decides not to take the risk. A moment later, the duo is riding horseback on a single horse. Confused at their location, the girl mistakenly points out a landmark. The man informs her that they are going to meet her mother and Robb at her uncle’s wedding, where he expects a reward for the girl.

Overlooking Yunkai’s walls, Daenerys and her men look down upon the hired swordsman known as the Second Sons. Barristan seems somewhat worried about the swords for sale, so the Queen decides to invite the leader—Titan’s Bastard—for a meeting, knowing that, “A man who fights for gold can’t afford to lose to a girl.” Making himself at home, the man has the elegance of Jersey Shore’s “The Situation.” Telling the Mother of Dragons that she resembles a prostitute he once bedded puts him at the top of her soon-to-be-killed list. Titan’s lieutenant, Daario, eyes Daenerys with looks falling between love and lust. Daario, himself, looks a little like Garrett Hedlund in Troy, will long hair and armor.

Afterwards, the three men pass around a prostitute from lap-to-lap, arguing about fighting for beauty or purchasing sex. Daario admits that he has never paid for sex, and feels that men is blessed with the chance to kill other men in battle and to sleep with women who want to be slept with. Losing the conversation to the idiot across from him, he finally leans back and polishes the blade that hangs from his waist. Finally, Titan’s Bastard decides that rather than fight the army, they simply need to sneak in and murder the Mother of Dragons. Playing their version of “shortest straw,” Daario is selected to kill the Dragon Queen.

In Dragonstone, Stannis sizes up Gendry, knowing the bastard is only half Robert Baratheon and half peasant. Uncomfortable with his muse/mistress’ suggestion of sacrificing the boy to the Fire God, he walks down to his dungeon to converse with Davos, although he has seemingly made up his mind to do whatever the woman tells him to do. Almost trying to convince himself, he says, “What’s one bastard boy against a kingdom?” Throughout the conversation, Stannis agrees to free Davos as long as he never brings harm to Melisandre. Quickly agreeing not to raise a hand to her, he admits he will continue to still think poorly of her. Moments later, Melisandre is seducing the boy, trying to gain his trust. Pouring him wine, she eventually gets him on the bed, climbs on top of him and says, “Come fight death with me.” Weird, but still acceptable within the Game, things seem to be going smoothly for Gendry until she ties him up, moves off of him and drops leeches on his chest and genitals. Throwing these blood-filled creatures in a nearby fire, along with Stannis and Davos, she names the three blood-bursting leeches after Robb Stark, Balon Greyjoy and Joffrey Baratheon, demonstrating the power in King’s blood.

Before the wedding, Tyrion visits his bride-to-be. “I didn’t ask for this…” he awkwardly begins. “You won’t be a prisoner after today, you will be my wife.” Gauging her reaction, he adds,” I suppose that’s a different kind of prison.” Already having the worst day of her life, Sansa prepares to walk down the aisle when King Joffrey (mega douche who killed her father), steps up to give her away, reminding her that he is the King once more. Moving down the aisle, Joffrey gives away the bride and steals Tyrion’s stool, which the dwarf needs to place a cloak on his potential bride. After an awkward attempt, he asks Sansa to kneel over the laughter in the crowd. Moments later, Tyrion is arguably the drunkest person at the party.

Annoyed at his son, Tywin tells Tyrion to pull himself together. “Your wife needs a child,” he reminds Tyrioin with a stern tone. “If you’re going to give her one, you need to perform.” Drunk as we’ve ever seen him on screen, Tyrion comments, “I’m the god of tits and wine,” reminding his father that he’s been in this situation many times. Sansa, moving away from the chaos, finds herself speaking with Joffrey once more. As if he hasn’t done enough, he tells her that she is now expected to have a Lannister child, so it presumably doesn’t matter which Lannister gets her pregnant. Appalled, she steps away as he informs her that he will pop in her room later that night and have his two minions hold her down if she doesn’t accept gracefully (ironically, this is the first time the boy has ever shown any type of sexual urge). Later, Joffrey tries to begin the Bedding Ceremony and pumps up the crowd. Apparently, the ceremony involves stripping down the bride in public and carrying her to the bedroom. Speaking up for his bride in slurs, Tyrion stabs a knife into the table and tells the King that if he doesn’t stop his actions, “Then you’ll be fucking your own bride with a wooden cock.”

Missandei, Dany’s translator, is helping the Mother of Dragons bathe and groom for the evening, while the two discuss actions to improve Dany’s dialect. In an instant, Daario is holding his blade against the translator’s neck, asking the two women to keep quiet. Letting them go, he admits that while he was ordered to kill the Dragon Queen, he has merely come to talk. Standing up from her bath, the man is given the chance to see Daenyers in all of her beauty before the translator places a robe around her. Telling the women that he was chosen to kill her but he decided not to, which caused a dispute among the ranks, he pulls a bag from his side and dumps out the other two men’s heads. While Dany admits she feels confused at his actions, he replies that it’s not complicated, that he is the “…simplest man you’ll ever meet.” Kneeling down, he agrees to fight only for her. “My sword is yours. My life is yours. My heart is yours.”

In the final scene of the show, Sam and Gilly stumble upon an abandoned cabin in the woods. Trying to build a fire and coming off as useless as usual, Sam eventually moves aside and lets his lady build the flame. Admitting that he believes the baby once winked at him, she says it was merely a blink. During the conversation, she tells him that he occasionally speaks too fancy for her. Sam tells her that she should name the baby and hints in the direction that appears he would like for the boy to be named after him. She doesn’t take the bait and only names off all of the terrible men she has known in her life. Outside, crows fill a tree, causing Sam to wander out to see what the commotion is about.

The birds hush and a figure appears in the distance. Gilly whispers, he’s here for the baby. Looking up, Sam spots a White Walker moving quickly in his direction. Pulling his sword, the ice zombie catches it with his bare hand, presumably turns it to ice, and shatters the weapon before tossing Sam aside with one blow. Remembering he still has the “dragonglass” (obsidian that looks like spearhead), he pulls it from his cloak and stabs the beast in his upper left shoulder blade. Unable to reach the injury, the White Walker falls to the ground, cracks like glass and blows away as dust. Sam looks up at his woman while the crows fly away overhead.