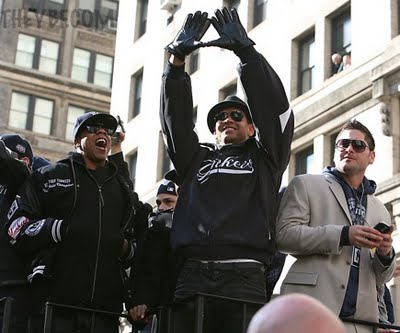 The Roc Is In The Building

Jay-Z loves the Game, any Game with a capital ‘G.’ He’s a born hustler, thriving off struggle and success, figuring out situational specifics on the fly. Having conquered the crack Game, the rap Game, and the entertainment mogul Game, he’s hungry for another contest and it’s led him straight to sports.

Last week, Yankees second baseman Robinson Cano announced he was abandoning feared mega-agent Scott Boras for Jay-Z’s management, backed by a partnership with Creative Artists Agency. Specifics are fuzzy regarding how active a role Jay will take, but he’s expressed interest in broadening his range and possibly branching into basketball, a move that would require the surrender of his insignificant owner’s share of the Nets. As great as it is to see Jay and Beyonce courtside, it’d be even better to see him play a significant role in the sports landscape.

It’s a natural move, considering his familiarity with contract negotiations, experience playing to big business while nurturing individual style, and godfather status within the fused culture of hip-hop and sports. What’s more, he’s a self-professed Yankees lifer and international ambassador of their logo, a quality that may cause a wrinkle in Cano’s trip to the offer table prior to his 2013 free agency. Jay’s loyal, and while that applies to the Yankees, where I’m sure he’d love to see Cano stay, his first and only real mistress is the Game. I have no doubt he will do right by Cano with the most money stacks he can find.

Assuming Jay picks up quick, and that’s a safe assumption, what’s next? I can’t imagine Hov catering to smaller end clients or limiting himself to any one Game, instead snagging whatever marquee players he can throughout sports. He has friends and fans everywhere, but the Roc Nation is most entrenched in the NBA, fortified by his attendance of games and all-star festivities and dominance of pre, in, and post-game arena music. The Nets are from Brooklyn, were branded in part by Jay, and have some interesting talent, but odds are, Hov will cut free to chase champions. Why would you sip Crown Royal with Deron Williams when you could spray champagne with Lebron?

Whatever the outcome, Jay’s influence will only be positive. As a cultural icon attracting worldwide attention, every move he makes is followed by millions of fans. The more active a role he plays in baseball, basketball, and any other Game that fits his fancy, the more popular that sport will become. Plus, this brings us one step closer to the Greatest Ever World Jam, a stadium tour co-headlined by Kanye West and Kobe Bryant, Kanye providing extended hits and general MC services while Kobe competes in a series of one-on-one contests with local challengers at increasing skill levels. Tell me you wouldn’t empty your account to see that spectacle. World, let’s make this happen.