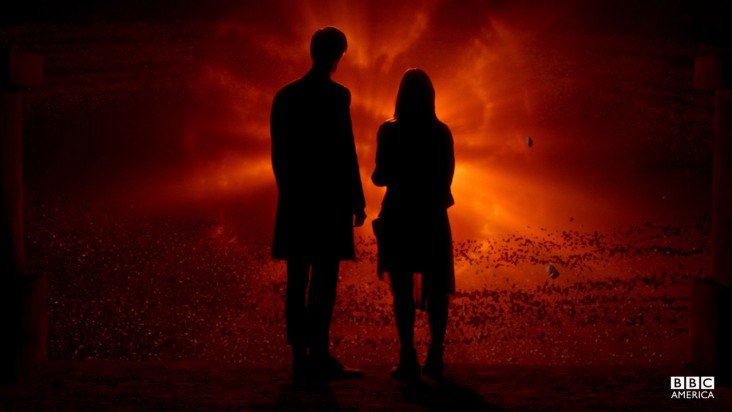 ‘The Rings of Akhaten’

‘The Rings of Akhaten’ was an enjoyable though not especially memorable episode of Doctor Who. Though it featured an interesting location and insight into Clara’s character, the episode’s villain felt like it was added as an afterthought and lead to an anti-climactic conclusion.

The main conflict of the episode didn’t start until about half way through. The Doctor and Clara arrived on a planet and they spend some time exploring it.  After getting separated from the Doctor, Clara reassures a little girl, Merry who was nervous about having to sing at a ceremony. As Merry sings, she is taken to be a sacrifice to the Old God of the planetary system. It was a fairly straightforward problem with an equally straightforward solution. But given the show’s recent tendency to create overly complicated plots, the episode’s simplicity felt refreshing.

The only real problem with the conclusion was the Doctor’s monologue. Grandiose monologues shouted at an enemy have been done too many times on this show. I’m not sure if it’s the writing or the delivery, but at this point, the Doctor’s shouted monologues all sound the same, and it’s grating. The other thing that was problematic was the fact that the ‘Old God’ lived in a sun or was the sun. (It wasn’t really made clear.) But after the Doctor and Clara defeated the Old God, the sun went out. Isn’t that kind of an issue for inhabitants of that planetary ring?

The episode featured some very interesting character development. The way Clara’s parents met was adorable, and (spoilers– kind of) surprisingly relevant to the plot. Showing more of Clara’s pre-Doctor history gave Clara a softer, more vulnerable side, as did separating Clara from the Doctor and allowing her to bond with Merry. The show does sometimes struggle with female characters and making them one dimensional, so it’s nice to see more layers to Clara.

‘The Rings of Akhaten’ wasn’t the most ambitious episode of Doctor Who. But I think it succeeded in what it wanted to achieve. It was fun, it was entertaining, and all in all, it was a solid hour of television.