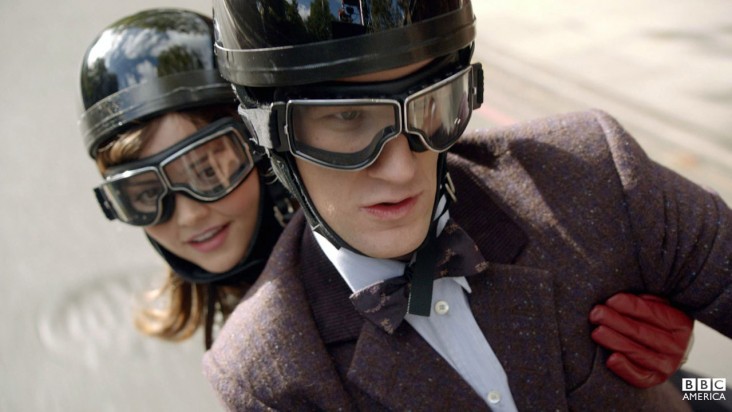 ‘The Bells of Saint John’

Doctor Who’s midseason opener, ‘The Bells of Saint John’ was a fantastic starting point for new companion Clara, but ultimately was weighed down by problems stemming from the past.

The concept behind the episode was clever- something is in the WiFi. In our digital age, the idea that something could be lurking in the Internet, taking human souls and trapping them in an online living hell is a creepy one. But the overall execution was disappointing. There were some good moments that created an interesting commentary on how dependent our society is on technology, but ultimately, the episode wasn’t particularly memorable.

Part of the difficulty of this episode is it had to serve as the new companion, Clara’s introduction. We’ve also already met Clara before….kind of. Jenna Louise Coleman has appeared on the show twice before as different versions of the same woman, dying both times. All three incarnations have a similar personality and character quirks, which were brought up throughout the episode. It actually worked in the show’s favor, refreshing people’s memories of a semi-established character. It made what could have been a standard companion introduction episode into something a little different.

Unfortunately, other references to the past weighed down the episode. One of the first sequences which saw the Doctor living in a monastery in Cumbria felt similar to several other sequences that have been seen in other episodes. There is a random setting, past or present. Something dramatic happens, and the Doctor has to be alerted. I’m fine with seeing a few unrelated historical or futuristic places. But this type of sequence has been used before. It’s long, overdramatic, and tries way too hard to be mysterious. Get to the point. Show the Doctor being told, don’t have a scene before saying he needs to be told. It’s fine, once or twice. Enjoyable, even. But by this point, it felt tired. And since the main conflict of ‘The Bells of Saint John’ could have been fleshed out more, it made the Cumbria scenes feel even more unnecessary.

And I just have to ask: Why?

The mystery of who Clara is, why there are three versions of her running around time and space is a promising plotline. You know what else is a great plotline? Finding out who the Silence are. If you can’t remember who they are (and no, I am not trying to make a joke about how the minute you look away from the Silence they are erased from your memory), they are the organization from Season 6 who believed silence will fall when ‘the question’ (“Doctor Who?”) is asked. This plotline is a continuation from Season 5’s main arc, when someone tried to blow up the TARDIS. We still don’t know exactly who it was but it’s safe to assume they are connected to the Silence. But how did they hijack the TARDIS and how does it relate to the Season 6 convoluted plan of having River kill the Doctor?

If this sounds confusing, it’s because it is. There are loose ends that go back years, and the show has shown little interest in exploring them. Clara’s storyline is interesting, because Clara the character is interesting. She’s likable, so I care what happens to her. I care significantly less about plots that are overly complicated and drawn out. I want good, strong storylines, not ones that are too concerned with trying to be clever. It’s possible that all the storylines will come together in some brilliant reveal. But in the meantime, it’s frustrating as a viewer to be given mystery after mystery with few answers.

At the beginning of Season 7, back in the fall, we were promised the episodes would be ‘epic’. Sadly, said epicness seems to be at the cost of having strong standalone episodes. The concept behind this episode had so many possibilities, but it felt like it sacrificed exploring those possibilities in lieu of setting up future conflicts. It was an entertaining hour of television; there were some smart plot twists, and plenty of sharp banter between Clara and the Doctor. But ultimately, ‘The Bells of Saint John’ did not live up to its potential, or the high standards the show sets for itself.