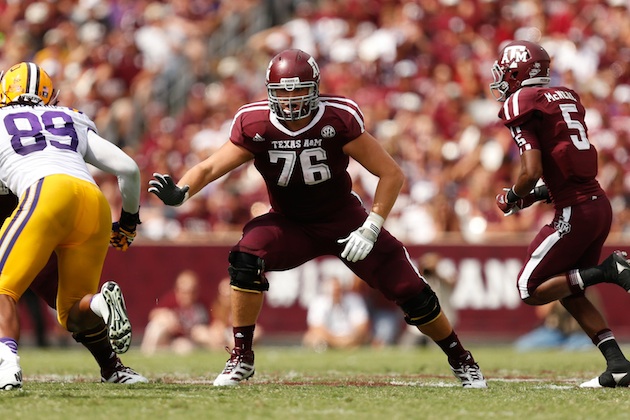 The “Offensive Tackle” position seems to be the dominant theme in this year’s NFL entry draft. With the Chiefs holding the first overall pick, most seem to think that they will take Luke Joeckel, tackle out of Texas A&M with that pick. However, the rising stock of Eric Fisher and Lane Johnson just might be enough for them to make the leap into a top-five pick.

With many assuming the Chiefs are set on Joeckel, the next tackle to come off the board should be Eric Fisher. Reports are now starting to indicate that the Jaguars, at the number-two pick, will select Fisher. The Jaguars could use Fisher to play opposite side of Eugene Monroe, who has been their starting tackle for the past 5 seasons. Fisher would not only help there dangerous run game, but keep either Chad Henne, Blaine Gabbert, or whoever end up with the starting quarterback job come opening day; which is definitively a priority for the Jags this season. However, if the Jaguars pass on Fisher, then the Oakland Raiders are surely going to think about grabbing him at number three.

There has been speculation all week long heading into draft week that the Philadelphia Eagles are hard-pressed on the Oklahoma Sooners’ Tackle, Lane Johnson. Johnson, six-foot-six, 303 pounds, is a player that has his stock increasing by the day; starting out as a potential late first-round draft pick, and now is being considered as a top-five pick. Johnson is more athletic than both Fisher and Joeckel, as he ran a 4.72/40-yard dash at the NFL combine, which is where his stock started to gradually rise. With the Eagles entering a rebuilding season, it is quite possible that they could decide to address an issue at the Offensive-line. Although, when healthy, the often injured Jason Peters is an elite left tackle, but if sustains another injury this season Lane Johnson would be a great candidate to fill the void. In the meantime, Johnson would be a great book-end tackle on the right side giving the eagles a much better pass protection than the previous season.

Come April 25th, these three Offensive Tackles will find themselves on the payroll for a team in the National Football League, living their dream, as they begin the long journey towards Canton.