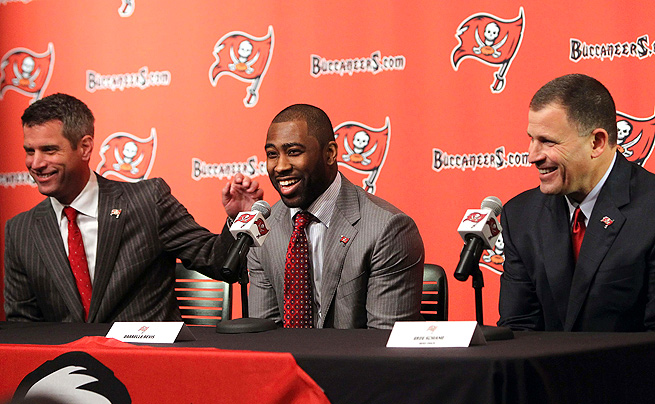 It has certainly been a long time coming but finally the New York Jets and Tampa Bay Buccaneers have agreed upon terms of a deal that will send Darrelle Revis to Tampa. In return the Buccaneers will send their 13th pick in this weeks’ NFL draft, along with a conditional 3rd rounder in next years’ draft. The two teams have had steady talks about this trade for months now, and were finally able to get it done on draft week.

Revis joins a secondary that consists on recently acquired safety, Dashon Goldson, last years’ first round pick, Mark Barron, and veteran corner Eric wright. Tampa bay had intentions entering this offseason that they were going improve their secondary that was picked on ferociously by their opponents last season; well they have done that and some. Dashon Goldson was a Pro-bowl safety for the 49er’s last season and a huge part in their NFC championship winning season. Paired along-side sophomore safety Mark Barron the deep threat pass will be more of a challenge for their opponents next season. To survive in the NFC south, where they face Atlanta and New Orleans twice a year, a team needs to have good pass defence; if not Drew Brees and Matt Ryan will gun-sling the ball downfield all day long; and let’s not forget the Cam Newton – Steve Smith threat as well.

The edition of Revis gives them a proverbial shut-down corner that this team was in desperate need of. Last season, the aging Eric Wright was not able to keep up with the top flight speed of Julio Jones, Roddy White, Marquis Colston etc. allowing for the Buccaneers to have a down season. However, Revis fixes that problem immediately; one-on-one pass coverage, Revis is the best in all of the NFL. He adds an element to this defence that they’ve lacked for numerous years, and will be expected to perform at a high octane level.

The offence has enough fire-power to put points on the scoreboard. Josh Freeman, fifth year quarterback, has a lot to prove to coach Greg Schiano this year. Freeman and Vincent Jackson started form chemistry late last season and look to build on that heading into 2013. Not to mention Doug Martin, who also heads into his sophomore year, looks to impress as he also started to shine later in the season. It’s no question that the offence has enough potential fire-power to put points on the scoreboard. The only question is… will the defense step it up?

It’s going to be a sceptical season for the Buccaneers this year. If Revis is not able to return to form after his ACL injury that kept him out of action for most of last season, Both Schiano and GM Mark Dominik could find themselves looking for new jobs next year. There are high hopes for this Bucs team, and the edition of Revis makes them serious contenders. The coincidental part about the deal is that Revis gets to shadow Santonio Holmes in his first regular season game as a Buccaneer, as the Jets and Bucs are week one match-ups on opening weekend.

The Bucs definitely have the personnel to make the post-season in this upcoming season, but it’s a long and rigorous 17 week journey to get there. Is this their year? Is Revis the missing piece to their puzzle? Can Revis lead this Buccaneers team to the playoffs? All in Tampa are hopeful, but January is a long ways away.