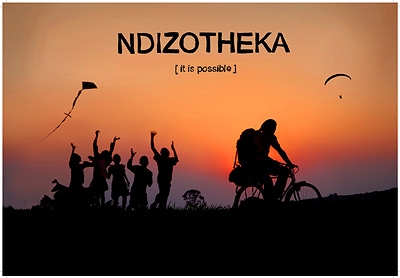 “Why do you assume you can look at people and they can’t look back?”  Godfrey Masauli admonishes his travel companion Benjamin Jordan, who is lamenting that he gets called a white man everywhere he goes in Malawi.  Jordan is directing a documentary entitled Ndizotheka (It Is Possible) about travelling to Africa to teach a lucky man to fly.

Well, okay, they are planning to paraglide from Mount Mulanje, Malawi’s highest peak—a hitherto unaccomplished feat.  There is a great deal to love on the surface of this film; the lush colour, the wry humour, the lofty ambition.  There is something inherently uplifting about watching Ben and Godfrey teaching room upon room of children about aerodynamics and flight, and watching these kids build kites from the detritus that litters their schoolyards.  But something more unsettling lurks beneath the surface.

Just because you can, doesn’t necessarily entail that you should.  Sitting in the Bloor HotDocs Cinema on a gorgeous Sunday afternoon, taking in the entries from this year’s Banff Film Festival, I haven’t stopped squirming since Jordan’s film began.

If a picture is worth a thousand words, here we go: Jordan films himself taking a photo of a quartet of smiling Malawi children, posing with a desiccated television set—they peer through the gutted piece of discarded equipment at the young white man holding the camera.

I shit you not.  Somewhere, an international development student just spontaneously dropped dead.

What truly made my skin crawl throughout watching this 46-minute ode to Jordan’s Man Friday is how blissfully unaware the director is of the contradiction inherent to every aspect of his work.  He descends, as if on high, to impart his fancy parachutes and laissez-faire brand of hakuna matata—and then woefully objects when he is treated as foreign, as an outsider.  He complains when Godfrey [justifiably] becomes frustrated with the rhetoric and then refers to him as “my friendly follower” only minutes later.  I feel for Godrey.  If the fellow who I was cycling across Malawi with decided to take time out of our schedule to go rant about me, naked, in a mud hut, pausing to submerge his bearded visage in a bucket of water (not exaggerating here), I’d be peeved as well.

It feels as though Jordan left his Canadian home with a fully-plotted concept in his mind, right down to the stern, harrowing personal growth Godfrey must incur before he can take flight.  Which is fine, except when your plotting concerns the real life of another human being.  The whole film feels emphatically as though Jordan saw fit to shoehorn the world around him into a predetermined story rather than capture the elusive magic of chance encounter and reality; that is to say, documentary.

Unfortunately, or fortunately, much of this is rendered irrelevant by the film’s final five minutes.  The payoff is impossibly joyous, and the moral sermonizing and hackneyed colonial nonsense fall away in favour of something real, something palpable, something human.  I’d go so far as to say that it captures one of the most genuine, raw moments of emotion I’ve ever seen committed to film.  And it only had to backpedal through a few decades of social progress to get there.  Worth it.  Right?