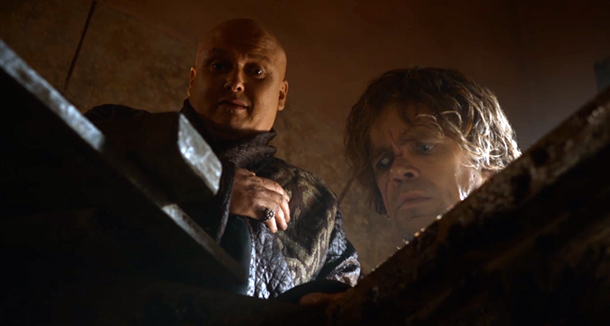 Game of Thrones 3.4 “And Now His Watch Is Ended”

In the fourth episode of season three, audiences were invited to examine some of the most substantial acts of betrayal ever featured within the Game of Thrones. In a sequence of remarkable moments, the show is becoming slightly harder to follow, unless you have been a die-hard fan of both print and film from the beginning. In the episode “And Now His Watch Is Ended,” we lost a few characters to swordplay while shining a light on some of the more evil tendencies of others. While the episode seemed somewhat lopsided in parts, it did a superb job of tying in all of the work that the first few episodes built, making a great show for viewers. Among all of the vengeful characters, Varys and Daenaerys seemed to have the spotlight this week.

Named specifically after the Old Bear, episode four surprised viewers as starvation and hatred boiled over within the Night’s Watch. Betrayal within the brotherhood reminds us that the brotherhood is more like a prison gang than a band of brothers—made up of thieves, killers, bastards, and rapists. Erik Kain, Forbes contributor comments on the slow pace within scenes that have featured the brotherhood. Kain writes, “It was surprising in the books when the men turned against Mormont, killed him and many others. In the show, it’s all been rather less exciting, though this scene was beautifully handled.” Making a valid point about book to film translation in general, HBO continues to do a great job and there are so many characters that these situations only invite conversation between fans.

In the opening scenes, an utterly helpless Jaime sits on his horse as prayers of death swimming through his mind. With an unenthusiastic gaze, the prisoner eventually falls off his horse and into the mud. One of his captors pours water over his head and another offers him a canteen, only to reveal it to be full of horse piss. Vomiting in the mud, with his dismembered hand hanging around his neck, the Kingslayer pulls a sword from one of his captive’s belt and tries to fight with his left hand. Fighting for a few moments, the man is outnumbered and out-armed. Defeated, he falls to the ground and is beaten, kicked and ridiculed. The leader tells Jaime that if he acts up again, he’ll take his other hand. Later, at the prisoners’ campfire, Jaime appears to be starving himself but Brienne convinces him to eat. She reminds him that he is acting like a woman and needs to fight each battle to survive in the real world.

Continually accurate in each remark, Olenna Tyrell comments on Varys’ spider-like tendencies as he enters her garden for a conversation. Although Varys continues to have blurry intentions, his wit shines when speaking with the Queen of Thorns and even with Tyrion Lannister. In an early scene, Varys explains to Tyrion just how he became an eunuch, while he opens a large crate in the center of the room. In a sequence similar to Hitchcock’s Rope, the two dance around the crate as Varys explains how a wizard purchased him as a boy; only to momentarily paralyze him in order to take away his manhood. Years later, Varys found a street urchin that was influential enough to find the evil Wizard. Lifting the crate’s lid, the retaliator reveals the old Wizard that has been delivered right to his doorstep. Metaphorically, Tyrion learns that revenge sometimes takes time, but is worth the wait.

“You here to seduce me?” asks Olenna Tyrell as Varys begins a conversation within her chambers at the garden. “Seduce away. It’s been so long. What happens when a nonexistent bumps against the decrypted?” she asks in an off-putting scene that even shocks Varys. Remarking that that particular question is left for the philosophers, she asks him to state his business, toys with him some more, and eventually takes a walk with him to discuss Littlefinger. Moving the conversation to Sansa Stark, the two decide that it would be best for Sansa to marry someone besides Littlefinger in order to derail his growing status. While Varys even appears to enjoy Littlefinger as a person, he understands the evil inside of the former treasurer as he remarks that Littlefinger “would see this country burn if he could be king of the ashes.” The duo decides that Sansa would be better fit to marry Loras Tyrell, Renly’s former lover. While it’s obvious that the Tyrells will grow economically from this marriage, it’s still unclear what Varys tends to gain, unless he is merely doing favors to ask for favors in return.

In episode three, a mysterious, flame-carrying archer in a dark cloak freed Theon from his captors. Fans of the book believe that this character may be Ramsay Snow, the bastard son of Bolton, although he currently remains nameless. Claiming not to be an Iron Islander, the mystery man saved Theon from the dungeon and then saved him once more from potentially being raped in the woods moments later. During this week’s episode, the two spoke and the stranger claimed to have saw Theon sail away on Ned Stark’s ship. While the two appear to be approaching the castle where Theon’s sister is said to be waiting, they continue their conversation as Theon’s savior opens the final door. Shining a light with his flame, the blaze reveals the same torture chamber as before. Whoever this man turns out to be, it’s clear that he’s a wild card, possibly more ruthless than King Joffrey, skilled as a killer, and truly dangerous to all players within the game. He toys with Theon like cat and mouse.

While it’s difficult to discuss everything in this episode, one aspect that can’t be missed is when the mesmerizing Daenaerys finally gets to show her true colors—resembling some sort of hybrid, ruthless humanitarian. When collecting her army of unsullied, she carries her largest dragon on a leash—like a fire-breathing kite—and hands it over to the slave trader, who gives her the whip that controls the slaves. “Is it done then?” she asks in English, when trading a dragon for an army.  In front of the soldiers, she holds the trophy-like commanding icon and begins to speak in Valyrian, although she had been using a translator during the trade. “Unsullied!” she shouts to the army as the slave master calls her a bitch for the last time. Turning, she says “A dragon is not a slave” in perfect Varlyrian. “I am Daenerys Stormborn of the House Targaryen, of the blood of Old Valyria. Valyrian is my mother tongue.” With both sides of the approaching slaughter confused, she commands the army to “slay every man who holds a whip.” The army viciously murders their former masters as the dragon sets fire to the village. As blood pours and smoke rises, she sets the army free and invites them to fight for her as free men.  In silence, they accept.