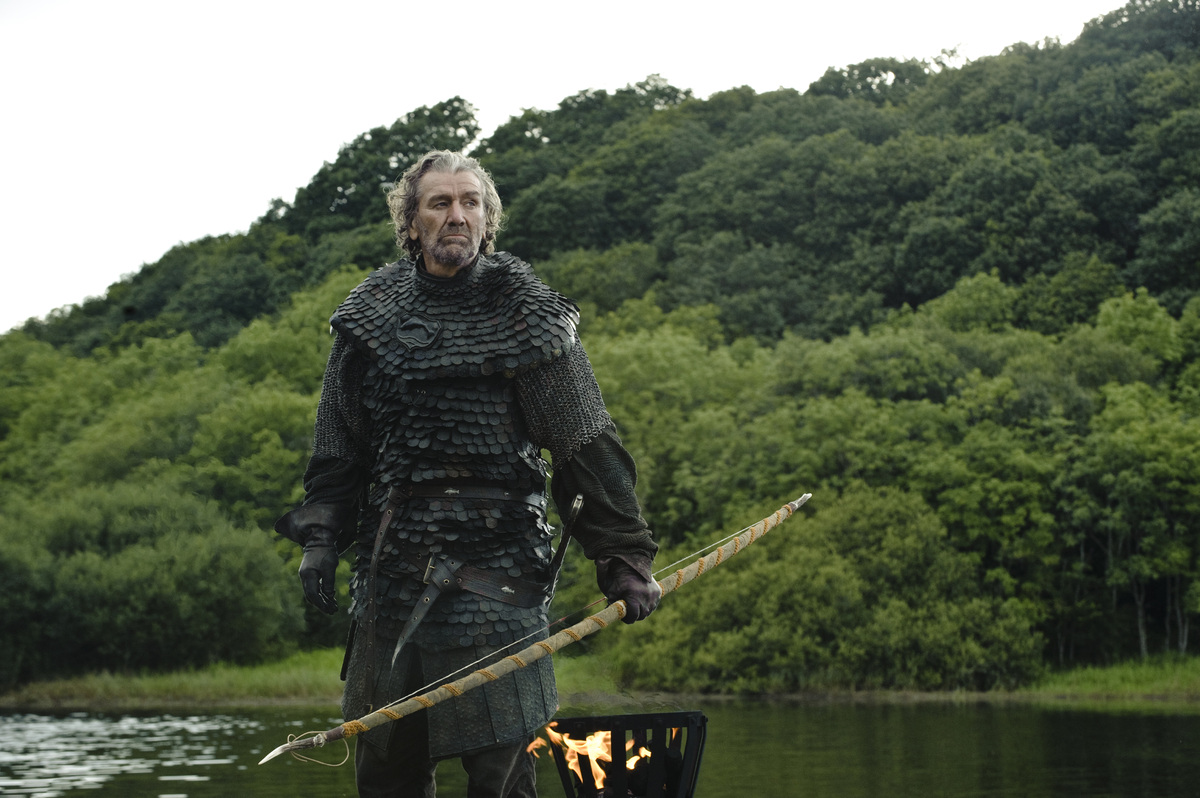 Game of Thrones 3.3 “Walk of Punishment”

Various stories within the fantasy realm will mention riches and gold, but Game of Thrones once again surpasses the genre with specific details about the economy within the Seven Kingdoms, making the series feel more like historic fiction that dragon-slaying fantasy. Ships, slaves, and soldiers are not simply acquired like they are in other books or coin-collecting video games. Instead, each must be purchased or at least financed over a deal. As in previous seasons, viewers know that “A Lannister always pays his debts,” and now we know just how large those debts are as well as the truths behind money being power within the Kingdom. In the Game, however, money isn’t everything and some players learn this truth the hard way.

Opening with Catelyn’s deceased father being pushed out into the lake aboard a highly flammable canoe, her brother Edmure Tully is having problems hitting the coasting outrigger with a flaming arrow for the ceremony. After a few misses, Edmure’s angry uncle, Ser Brynden “The Blackfish” Tully, pushes the boy aside, gauges the wind and takes aim with the bow. In another classic moment of Thrones magnificence, the Blackfish lets the arrow fly, shoves the bow back into his nephew’s hands with a disgusted look and leaves the funeral before the flaming arrow hits the distant canoe and bursts into flames, completing the ceremony.

Meanwhile, Tywin meets with a small council in his new chambers, which consists of Littlefinger, Varys, Cersei, and Tyrion. Like a game of chess, or possibly Medieval Musical Chairs, those invited make sure to choose the best chair for the small meeting. Cersei sits on one side of the table, close to her father. Littlefinger and Varys take seats across from Cersei, as Tywin watches Tyrion from the head of the table. Rather than take the final chair on the side with the other two men, Tyrion slowly slides the empty chair to the other head of the table position, across from his hateful father. Tyrion then complements the location and asks if there is news of Jaime, which there is not. Tywin then makes his short son the new Master of Coin, where Tyrion is left to comment on his ability to spend money, rather than save it.

In the end of the previous episode, the men from the House Tully have captured Jamie and Brienne. When we catch up with the group, the two captives are tide up on horses while the capturers sing a version of “The Bear and the Maiden Fair.” Back to back, the two captives speak and Jaime warns Brienne that once they stop, she will more than likely be raped repeatedly by the brutal men. Jaime then recommends that she pretend it’s Renly who is commiting the horrendous act, by closing her eyes. In his final sentences of sickening honestly, Jaime says that if he were a woman, he would make them kill him, rather than suffer the other fate.

One of the more shocking scenes of the episode involves Mance Rayder and his men as they come up on hundreds of severed horse heads, delicately arranged to create a spiral, crop-field-like pattern on the top of the snowy grounds. Expecting to see dead men rather than horses, the group decides to take some men to Castle Black to determine the truth of the matter and to infiltrate the enemy. Mance Rayder tells his men to take Jon Snow along with them when they climb the wall. In his final lines, he says that if Jon Snow isn’t helpful in their mission, then they should toss him off the wall and see if “crows can fly.”

Theon Greyjoy, a prisoner on a rack with his head covered, is set free when his sister’s employee comes to give him water and set him free. Outside, the boy gives Theon a white horse and tells him that his sister is waiting for him just beyond the forest. In an effort to repay the boy, Theon says that he will make him a lord of the Iron Islands. The boy responds by saying that he’s not from the Iron Islands. Seemingly confused about his location, Theon rides off to find his sister. In a later scene, we catch up with Theon when he stops to examine his location. After an arrow passes by his head, he takes off and is chased by the men who were keeping him hostage. The archers and soldiers from Stark soon catch up with Theon and toss him from his horse. Holding him down and preparing to rape him, the potential rapist is shot with an arrow. Soon, all of the men fall to the ground. The boy who let him go has once again saves him. After shooting the rapist once more at point blank with an arrow, the boy calls Theon “my Lord” and helps him up to continue riding.

Although Tyrion’s new title, Master of Coin, seems to be an insult, when he gets a glimpse inside of the Iron Throne’s books, he seems to agree with the position. The former Master of Coin, Littlefinger, dramatically moved up in the Seven Kingdoms by making money appear to satisfy all of the King’s wishes—both Robert and Joffrey. When Tyrion gets a chance to find out just how Littlefinger accomplished this task, he learns that pleasing the kings actually caused massive debts that the Lannisters now owe to foreign powers, specifically the Iron Bank of Braavos. The Lannisters have an attitude of old money, believing that counting pennies is for the weak, making them terrible at managing money. Tyrion even admits that his family consists of folk that spend money, not manage it.

As Tyrion uncovers his family’s debt, Jaime is bargaining for his life with this same gold, mistakenly thinking that his money is always the answer. The final scene of the episode is perhaps one of the most rewarding for the audience. Jaime sticks his neck out for Brienne and asks Lord Bolton’s hunters, as well as Locke, not to hurt Brienne, his former capturer. After a moment of admirable disposition, Jamie falls back onto his usual diction and pleads for freedom with money once more, almost sarcastically. The hostage says, “Fighting bravely for a losing cause is admirable. Fighting for a winning cause is far more rewarding.”

If there’s one thing to learn from the Game in this episode, it’s that doing what has always worked will not necessarily always work again. After Jaime’s arrogant remarks, his captors reply with a quick rebuttal and an even quicker action:  “All you have to say is, ‘My father,’ and that’s it. You’re nothing without your daddy, and your daddy ain’t here.” In an instant that parallels the closing moments of Tarantino’s Four Rooms, the capturer drops the knife like a guillotine and chops off Jaime’s King-slaying hand. Portraying that some men cannot be bought, the man leaves a screaming victim as the credits roll and a version of “The Bear and the Maiden Fair” by the Hold Steady takes over the speakers—a controversial change of pace to the usual end credits, reminding the audience not to get too familiar with any aspect of the show.