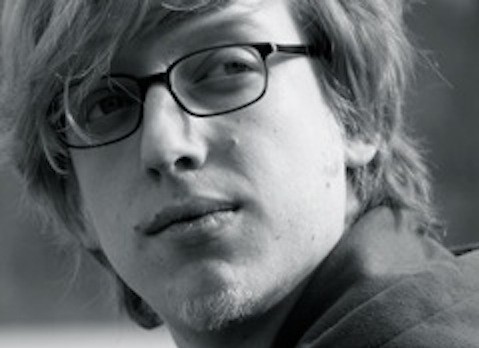 The star of Flat Earth’s memorable Pillowman (directed by My Theatre-favourite Sarah Gazdowicz), Cameron Gosselin’s chilling turn as Katurian anchored one of the year’s best productions.

One of this year’s nominees for Best Actor in a Regional Production, Cameron took the time to answer our questions about the dream production of that nightmare show.

Let’s start easy. Worst nightmare?
Ok, so we’re diving right in…  My worst nightmare? Perhaps being asked to reveal my worst nightmare…  That’s a bit meta. I can say that my nightmares consist of psychological horrors rather than physical ones.  Alienation and abandonment are major themes.  I can certainly say The Pillowman had a profound effect on my dreams.  I became so much more aware of what my mind creates subconsciously.  That awareness brings its own nightmares.

Sorry, that was a tough question. But really, what was the hardest part about tackling a role like Katurian?
I adored this role.  It was a dream role from the time I first read the script.  So, to choose the hardest part is difficult.  There were two major voices to Katurian.  He had the voice he used in conversation and his Storyteller voice.  The later voice is how Katurian wanted to sound, his ideal self, while the former was his real world self, the one dealt with by the police.  Embodying these different voices and the transitions between them were the most difficult aspects of the role.

Did you do anything to prepare for this role?
There was so much to do to prepare for the role.  The process that Sarah created was so collaborative that we all prepared and developed together.  Being the violence designer added another wrinkle because I got to decide how the cops were going to torture me.  I did a lot of research into totalitarianism and about Art versus the State in the past.

Do you identify at all with Katurian or his story?
I wouldn’t have accepted the role if I didn’t.  Beyond everything else Katurian is a writer, and that’s something with which I can definitely identify. I don’t think that there’s anything in Katurian’s life that he’s done that he cannot justify to himself.  That was part of the process.  Katurian might seem dark and twisted but I still found him most human.

Had you played such psychological and emotionally demanding roles in the past?
No.

Did you learn anything about yourself while working on The Pillowman?
Yes.  I learned how hard I want to work and what can result from it.

How was working with Juliet Bowler in a traditionally male role? Did you change anything about your interpretation of the script?
I’ll just say that there is a difference between sex and gender.  There’s male/female, and masculine/feminine.  They often coincide but our culture is quickly learning not to make assumptions.  Juliet is a woman who played a role written for a masculine man but she played it more masculinely than most men could have.  Power is power.  She had power and there was nothing feminine about it. I had no need to reinterpret.

What has been your favorite production or show?
This was my all-time favourite.

Tell us more about your process as an actor. How do you audition and rehearse for any show? Does your method vary depending on the show or company?
I would say that my method for any script or audition is really based on the text and the relationship with the director.  The only thing that the playwright gives me is the text of the script.  So, its paramount.  Beyond that I need to trust my director to know my strength and bring out the best in what I bring.

Do you have any dream productions or shows?
This was a dream come true.  Otherwise I dream of great villains.  For the stage I drool over Iago from Othello and Lenny from The Homecoming.

What is your biggest challenge as an actor?
I’m such a cerebral person I have trouble getting out of my own head.  So, I tend to overthink.  That’s what I seem to be working on constantly, even for this interview.

What draws you to certain productions or companies? How do you pick your next project?
It’s company to company.  Sometimes it’s the people, sometimes the show, but I’m not afraid to work for a check and know it.  We all have to eat.

The Pillowman received rave reviews. Did you know that you were working on something special during rehearsals?
Everyone showed up a half hour early for rehearsals.  Everyone.  Just because.  I’ve never heard of that before.  We knew something was going on.

What do you think made your production of The Pillowman click for audiences?
I honestly don’t know. I was never in the audience. I hope it was different for everyone.

If you could have drinks with anyone from history, whom would you pick?
Anyone?

Tesla.  No question.  Nikola Tesla was the greatest man ever kept from flourishing on earth.  I discovered my love for him during the work for another show but that aspect of his life really helped me to relate to Katurian.  Both men were obsessed with their work to the point that they ended up losing themselves in the process.

Do you have any pre-show rituals or practices? I’m not talking voodoo or anything crazy, but something that gets you in the mood or zone for your performance.
Usually there is music.  I usually make a playlist of songs that remind me of the show, of the character.  Music is so universally evocative.  However, for The Pillowman this was not the case.  Every day I rubbed new dirt stains into my costume and then was blindfolded backstage.  Just before the house was opened the stage manager would lead me out and sit me down center stage.  Then they let in the audience. Sitting silently on the stage blindfolded waiting for the cops.  That was my preshow, and it worked for me.

Is there anything you would like to say to our readers?
Thank You.  Thank you so much for reading about me.  My narcissism is momentarily satiated.  I hope to see you through the fourth wall.