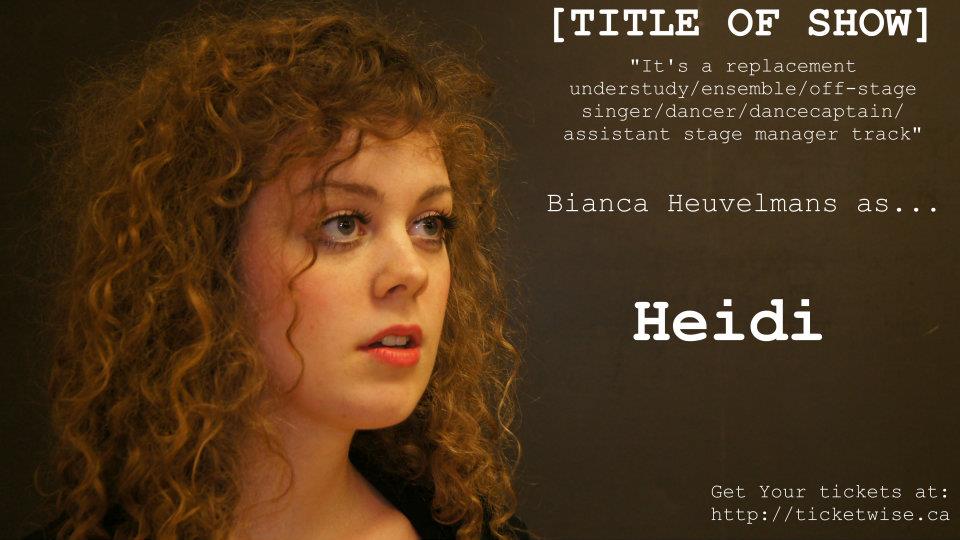 Bianca Heuvelmans is the dynamic powerhouse whose sweet performance as Heidi was the heart of Blank Slate’s premiere production of the ultimate meta-musical, [title of show]

One of this year’s nominees for Best Actress in a Regional Production, Bianca took the time to answer our questions about the production and what it’s like to play an actress playing herself in a musical about making a musical.

Can you remember your first experience with theatre?
I can indeed; my first experience with theatre is unforgettable. I’d never felt so filled with purpose… In the third grade. Nevertheless, it marked me. The show was lit by blacklights, with fish glowing through the dark, and my fish was to run away from a scary shark. I made the choice to not run but dance this escape- I can’t tell you what it may have looked like- likely ridiculous- but it sure felt right.

What actors and actresses have always inspired you? Are they the same today?
I was barely exposed to theatre and films as a child, which made discovering these artists like breathing for the first time! I’d say most notable are Lucille Ball, Robin Williams, Shirley Temple, Bernadette Peters, Moira Shearer, Leonardo DiCaprio, Patrick Huard, Tim Curry, Johnny Depp, Angela Lansbury, Haley Joel Osment, Charlie Chaplin and Megan Follows.

When did you start singing? Have you always wanted to be in musical theatre?
I can’t remember a time I was not singing. It’s always been my favourite thing to do. As for musical theatre, believe it or not, I had never even heard of such a thing until my sixteenth birthday when I saw The Phantom of the Opera. Dressed up, hearing Christine sing, I’ve never felt more arrested by destiny.

Do you have a favourite musical?
The Phantom of the Opera, The Light in the Piazza, The Rocky Horror Show, Cats, Hello, Dolly! and The Little Mermaid. I love a good Operetta too.

How did you get involved in [title of show]?
I played Heidi last year in Blank Slate’s Production’s run after auditioning in June. It was a ridiculously rewarding experience to be given a character with that much responsibility vocally and emotionally. A year later, I find myself co-producing [title of show] with my close friend Adam Norrad, directing the show, and performing too- as a now evolved, Heidi.

How did you approach making the character your own within the meta confines of the story?
I think approaching the role’s ups and downs with authenticity allows me to borrow Heidi’s experiences and have my reactions filter through my own heartbeats, held breaths, giggles, goosebumps, etc. It adds a personal flavour to a role that is so very relatable to the women I’ve encountered in our industry. Making my relationships with the individuals portraying Hunter, Jeff, Susan and Larry very distinctive also creates an unparalleled take on Heidi’s narrative.

Did you base your performance on the real Heidi or try and create someone new?
I definitely based my performance on the real Heidi Blickenstaff. I watched every interview, every making-of, listened to every performance I could reach for. The truth in the dialogue comes from a personal place, but I like to invest in the energy of the person. Once I feel I master that, all choices, posture, and relationships become unmistakable. Heidi has the energy of Doris Day meets Eve Arden.

Originally, [title of show] played out in sort of real time, the second half documenting the reaction to the first half. How do you think the piece has changed now that its full action is in the past? Do you feel like productions like Blank Slate’s almost form a sort of third act?
That’s a wonderful way of putting it and I am happy to say I believe productions of [title of show] today do form a sort of third act. Most especially since Jeff Bowen, Hunter Bell, Susan Blackwell and Heidi Blickenstaff are currently enjoying their new production (NOW.HERE.THIS.) as an ever-strong team of friends. I feel like being a part of a current-day production of [title of show] is proving the worth of the show’s morals (friendship, never giving up, trusting yourself and your friends, not taking life too seriously, being yourself, etc.) by getting up there and doing what we love, while the originals are doing the same on a different stage. It’s upholding a story’s worth and making it resonate inside of a whole new audience.

In your experience, in what ways are the behind-the-scenes antics in the show a reflection of the real process of putting on a musical?
I can say that energy, listening, trust, and discoveries are the key foundations in the process of putting on a musical. Behind-the-scenes antics are the best contributors to positive and buoyant energy. When you can share in real experiences with your actors and crew offstage it’s one success. But when you can take that sharing and allow it onstage too- that love and frolicsomeness is contagious. And most importantly- it breathes more life into the believability of [title of show]’s meta choices.

What’s the most challenging role you’ve ever played?
I think the most challenging role I’ve ever played has been that of actor/director/co-producer in this February’s production of [title of show]. The amount of responsibility I felt towards the production is almost inexplicable. Co-producing with my best friend (Adam Norrad- who performed as Jeff) is also a first and a challenge in both trust and confidence. Directing for the first time is a challenge in hard work, specifics, perspective, and open-mindedness. Finding new truths as Heidi is a challenge in recognizing weaknesses, reaching higher, and trusting your gut. Most happily, I can share that I’ve had a happy ending with the experience. The strength of relationship between myself and Adam working towards a common goal invested much truth into Heidi and Jeff’s strength of relationship on stage. And juggling so many titles, though insanely demanding, has birthed a more learned, assured, and excited artist.

Do you have any dream roles you think are perfectly suited to you or something completely against type you’d love to try as a challenge one day?
I dream of originating a role of my own. To make the very first choices for an all new story could be magical. Christine Daae, Janet Van De Graaff, Cunegonde, Dolly Levi, Clara Johnson, Eponine, any chance to sing alongside a big band; these are the roles that I crave. As for a big challenge- it is what I hope for in every role I claim. If it’s easy or obvious, there’s nothing at stake and nothing earned.

If you could pick one definitive moment in your career up to this point, what would it be?
I think reinventing Magenta of The Rocky Horror Show’s vocal track was definitive. Working with a musical director who encouraged taking it much further, and sharing the challenge with an inspiriting cast, I aimed to create a Magenta that was spookily confident and impressive- especially vocally. Those traits left an imprint on my own rather demure and forethoughtful character.

Do you have anything you’d like to add?
The more experiences I garner in and around musical theatre, the more I fall deep in love with the writers, composers, performers, musicians- people who invest all that they are to telling a story and celebrating expression as a quirky family. I hope the celebration just gets bigger and better. Thank you for letting me share some behind-the-scenes thoughts with you!