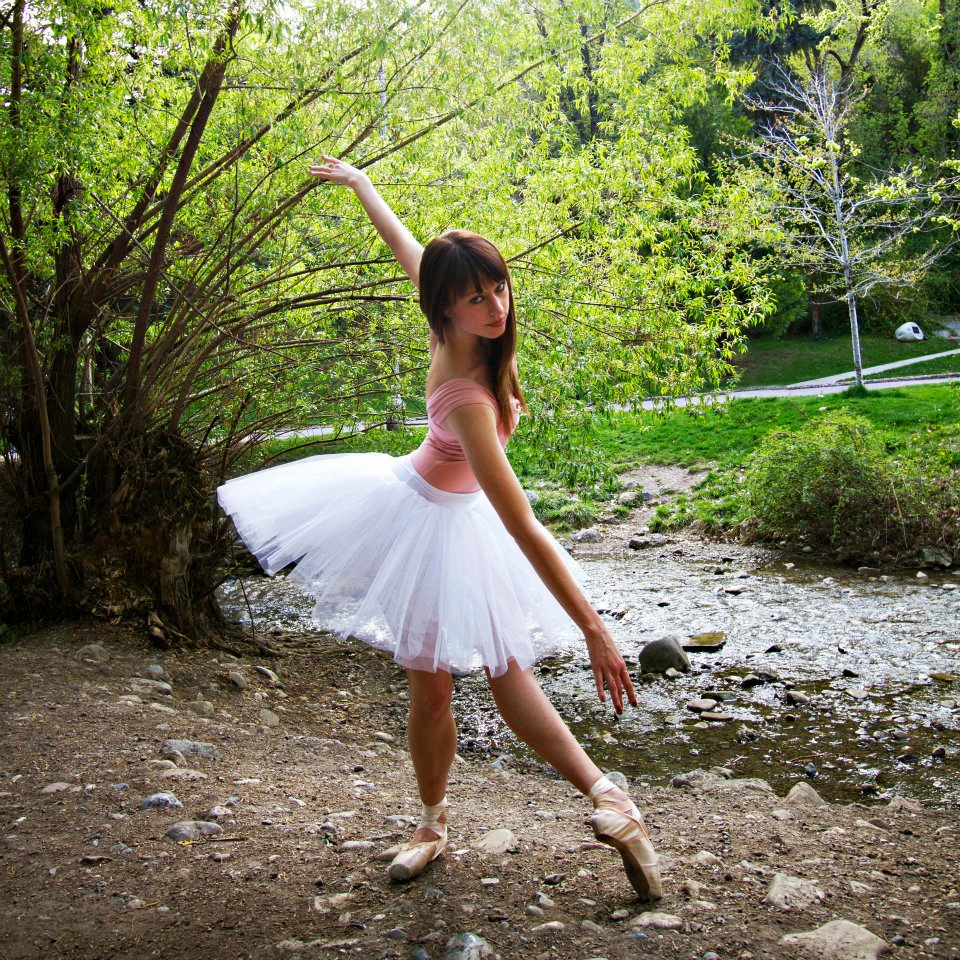 One of the coolest new TV ventures of the year was Breaking Pointe, a CW reality show about the inside politics and interpersonal dramas of professional ballet dancers at Ballet West in Salt Lake City. One of its most compelling characters was a sweet-faced Corps de Ballet member named Katie Martin. When her contract wasn’t renewed, viewers watched as the eternally optimistic Katie faced finding a job in another company and leaving her boyfriend and best friend behind at Ballet West.

One of our Best Female Reality Star nominees in the 2012 My TV Awards, Katie took the time to tell us about life as a ballet dancer and, now, a reality star.

Do you remember the first ballet you ever saw?
The first ballet I ever saw was the Joffrey Ballet perform the Nutcracker. My ballet teacher gave my mom tickets and I remember we got all dressed up and it was freezing outside! But I remember the snow queen literally took my breath away. I remember her being so incredibly beautiful and confident, I was smitten.

What is it about ballet specifically that made you want to pursue it professionally (perhaps over other dance forms)?
I love how not everyone can do ballet. The average person will not be a professional ballerina. Ballet is competitive and beautiful at the same time. You have to be everywhere at once but still be calm and collective. To be a ballerina you have to be so incredibly strong, determined and smart, mixed in with a little crazy. And that’spretty badass. If that doesn’t draw you to the ballet world, I don’t know what would.

What performers have always inspired you?
I always like to look up to people in my everyday environment. I’ll look at the ballerinas in my company and try to absorb a little bit from everyone.

Do you have a favorite ballet or choreographer?
Favorite ballets for me are determined by the music. Therefore, Swan Lake and Romeo & Juliet are for sure in my top 5.

Tell us about the process of casting Breaking Pointe. Did the producers interview each dancer before choosing which of you to feature as the main characters?
For Breaking Pointe casting, the producers came to Ballet West and interviewed about 10-15 people (myself included) for the show. I remember my interview was about 3 days after my birthday and I told them the wrong age! [Laughs]. As the interviews went on anyone who wasn’t initially interviewed had the opportunity to have an interview, so at the end of the day almost all the dancers sat down for some questions. After a lot of phone calls and emails here we are!

Do you feel like viewers got to know the real you in season one?
I do feel the cameras portrayed an accurate version of myself. I do wish our viewers were able to see more of me with Beckanne and Ronald hanging out or dancing. It’s difficult to fit an entire 6 weeks of footage into a couple of TV hours, but I think they did a great job. It’s easy to want to exaggerate stories or be more dramatic because cameras are in your face, and it doesn’t feel real. Sometimes when filming you have to remind yourself you are not playing a fictitious role, you are living your real life. So I would always stay true to myself, and try to not do or say anything I wouldn’t be proud of the next day.

How much of what we saw played out exactly as it would have if the cameras weren’t there?
The scenes of Breaking Pointe are real. For example my meeting with Adam Sklute about my contracts was real. That happened in real time, we did not rehearse the scene and we did not film it more than once. I actually liked having the cameras in the room, it took some of the pressure off because I knew what was about to happen.

How much producer involvement is there? Do the cameras follow you 24/7?
The cameras followed us around a lot! Ronald and I tried to keep track of how many hours we filmed, but stopped after 140 hours!

Is there a great story from your time at the company that you wish had made it onto the show?
I wish I was filmed dancing more. We also performed a ballet last spring, The Little Mermaid, and I was the lead role, I was the mermaid. I was sad they didn’t show that part of my life. [Breaking Pointe] opened up with me in a very sad place [but] successfully performing the lead role for my last performance with Ballet West was very rewarding, considering everything that happened.

What’s one interesting thing we don’t know about you?
Well I’m obsessed with painting my nails and drinking out of straws!

Season one is all about you leaving your boyfriend (Ronald) and best friend (Beckanne) behind at Ballet West when your contract isn’t renewed. Will your story continue in season two? What can we expect to see?
I can’t comment on season 2.

Stylistically, Breaking Pointe reminded me The Hills- if that show had been about people with jobs and talent. Did you ever watch shows like that before Breaking Pointe and feel like you’re now a part of that world?
Yes I watched myself on TV and that’s when it finally sunk in that I am on a reality television show! I think Breaking Pointe is very classy in comparison to others, it shows us doing our career jobs every day and also our personal lives. It’s incredible the amount of reality TV out there. There’s a lot of interesting shows out there and I’m happy Breaking Pointe fits into the category of informative and entertaining.

If you could dance for any company in the world, which would you pick?
I don’t really have a dream ballet company, I just want to dominate whichever company I am part of!