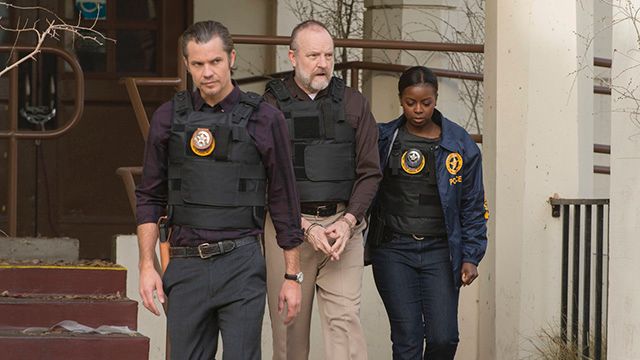 This week’s Justified more than makes up for this season’s lulls. The Marshals go to war with Theo Tonin’s envoys over Drew Thompson, letting loose a thrilling torrent of barbs, blood and badassery.

Not being a fourteen-year-old boy, I use the term “badass” deliberately and carefully, just as Justified delivers it. It comes not from the car that blows up, nor the punches stoically received, but from an excellent episode of layered, well-delivered dialogues, everyone gets a good, snappy response in before doing something great. There is no fumbling here: it’s an episode of cool people getting things done, always with time for a snappy comeback.

From the get go, everyone rifles up, and much of the episode is spent discussing battle strategies. On one side, Boyd has stayed to help the Detroit Mafia on their revenge mission. On the other, the Marshals have the target of that revenge.

As with all good episodes of Justified, the split falls between Raylan and Boyd with the imposing shadow of Theo Tonin and his hilariously nicknamed henchmen simply looming over Harlan without ever stepping too far into the mix.

That said, the episode’s very best moments fall not to Raylan nor Boyd, but to their various men. Colt has been a difficult character to swallow this season: his erratic behavior often felt like out-lying sloppiness, muddling episodes and increasing the body count because of poor writing rather than drug-addicted mania.

One of his best moments was in “Kin,” comparing history with Tim, and so a highlight of the episode is Tim and Colt in a standoff of IEDs and military strategy. They have a tense, quip-filled phone conversation. For once, Colt has an interesting purpose, which uses his history, and, what’s more, gives Tim more screen time.

Ultimately they are a side story, a quickly reveled decoy along the road to Drew Thompson. But it’s a battle with many enjoyable moments: Art and Tim miscommunicating about a Molotov cocktail, a big explosion, Colt’s autobiographical movie star preferences.

Meanwhile, it’s Constable Bob’s Big Day. Bob seemed to have been introduced as a joke: a non-Raylan trailing in the wake of Raylan’s swagger. In “Decoy,” he gets to be a hero by taking punches and spouting off “Nancy Drew?” “Dr Drew?” and “Drewbacca?” rather than reveal any information. He gets to be as awesome simply by doing nothing.

Bob’s torture scene feels like the longest in the episode, as his fate genuinely is uncertain, as the writers could have betrayed his pathetic-ness into empathy by having him killed. Instead, we’re on his side while he brutally endures his beating, and then kills his attacker before Raylan arrives – without his Go Bag and everything!

It’s a great use of Bob without lifting him too high. To remind us that Raylan basically is Han Solo, in a later scene, as Raylan leaves to an unknown fate, Bob starts to say “I gotta say this…” before Raylan cuts him off with, “Don’t.” Raylan is not one for meditation or speeches, as the episode reminds us.

Raylan spends much of the episode interacting with Shelby, trying not to deal with memories of his father. Shelby presents the ultimate question that Justified poses: can people change themselves and their legacies? The way Shelby offers help is by promising to act as “the man he became” rather than the Drew Thompson for whom everyone is searching. Raylan flatly rejects this proposition: just as his father was an absolute, unchanging force, so too is everyone else.

Enjoyably, this episode allows Shelby to rattle off more backstory – that he met Arlo in Vietnam where he was a pilot. Rachel is stuck with Raylan and Shelby and during the episode she almost makes title – that is, she gets to dance around the all-important word “justified.” Rachel demands to know from Shelby what his self-justified actions are meant to lead to, after all that he’s done, all the times he’s changed, what he really wants.

It’s a key question for a show about criminals and the people who chase them: what is the end goal? Justified has always done an excellent job in grounding its greed in its villains deeper needs. This season finally answered that question for Boyd, bringing him and Ava together into the quest to build something larger, to change in the way Arlo never could, in the way that makes Raylan, in his implacability, more his father’s son than Boyd.

Ava, meaning is stuck alone in the bar with Johnny and Theo Tonin’s right-hand man, Nicky Augustine. After having spent the season enacting her own private Lady Macbeth performance, she gets her own badass moment, no longer hand-wringing, but drink-throwing.

Ava calmly rebuffs Nicky’s taunts of sexual promiscuity in exchange for power and leaves at gunpoint, although only after learning that Johnny has betrayed Boyd. Ava has bigger fish to fry than the God-like threats of Theo Tonin, as she presumably leaves to find Boyd.

The episode ends with Raylan and Boyd brought together, with Drew Thompson long gone on a coal train. This method of escape, thought up by Bob, is foreshadowed a couple of times – Bob is tortured to “Love Train,” Shelby non-sequitors about the regularity of Harlan County coal trains, Boyd repeats the chorus that he and Raylan understand one another because they once dug coal together.

As we near the end of the season, this episode is left appropriately in the lurch – Colt kills the Tonin disciple with whom he was watching the Marshals and Boyd seems to have officially lost Drew Thompson, all while we still have two episodes left of twists.

It’s not a perfect episode: while the episode starts by reminding us the power of Theo Tonin – Nicky compares Theo to the Old Testament God, whose power is unquestionable, it seems hard to believe that any mafia boss would openly rain down on federal agents in order to enact revenge on one man.

I am willing to forgive Justified this improbability for the simple fact that it makes for such good television. The show has finally found it’s track, and it’s one that does not stray too far from the shows established virtues. The villain this time is a distant one, one too far to conquer. Instead the stakes are Boyd and Raylan’s respective futures, born of  the consequences of long finished actions.