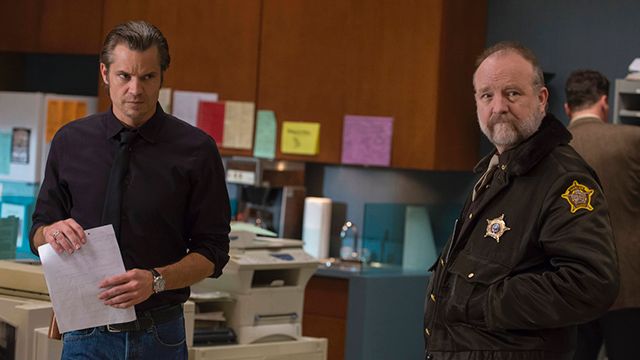 People are dropping like flies along the way towards Drew Thompson. It’s a murder-heavy episode, but the most important one comes first: Arlo Givens, Harlan County’s Worst Father, dies of a fatal meeting between scissors and heart.

Like his son after him, Arlo goes out with pizazz, on his own terms. He dies fighting, and gets to whisper his heartfelt last words to Raylan: “kiss my ass.” It’s a good death for someone whose presence – or often, lack thereof – has defined our hero. While many other things happen in “Outlaw,” Arlo’s death leaves a deep mark in the increasingly high pile of plots and characters.

What’s more, it grants Timothy Olyphant a chance to be more than the excellently posturing badass he usually is. His reaction is appropriately restrained: alone, his grief is expressed as a sort of exasperated sadness with everything held just below the surface.

In between dealing with his father’s death, Raylan ostensibly continues the quest for Drew Thompson. He gains no new information this week, and as he’s feeling like being a lawman this week, this predicament is made clear in the Marshal’s office.

The episode wraps up with Raylan, Art, Tim and Shelby going over their total lack of information. After Raylan states that they should talk to Boyd directly, he’s forced to take time off for his father’s death. It seems likely that next week, he’ll be doing the former and none of the latter.

Justified is at it’s best the closer Raylan and Boyd are – maybe not always in the same place, but going after the same prize. As Raylan deals with unexpected emotional hurdles, Boyd spends the episode making a power play that makes light work of the towering Clover Hill Elite.

The Harlan Aristocracy attempts to make Boyd “the boy who takes out their trash.” Boyd calls on out of state powers, turning Theo Tonin’s hit man against them, and then going into unspecified debt to Theo in order to usurp them entirely.

I wouldn’t put it past Justified to throw yet more twists in the way of Boyd’s criminal takeover of Harlan County, but as it stands, Drew Thompson is not only the mystery at the heart of this season, but also the prize for both our hero and anti-hero. For Raylan, it means career advancement for his (and his child’s) future, and similarly for Boyd, it means a permanent place as the Theo Tonin’s man in Kentucky, for his (and his possible child’s) future.

Of course, lurking in the wings are still Johnny and Wynn plotting against him, and Colt, blundering around, contributing to this weeks body count while trying to rectify his mistake of not killing Ellen May.

It seems like a sloppy episode largely because of all that has come before it. Over half way into the season, and what appeared to be careful plotting has revealed itself to be a pile of red herrings – lots of storylines that have quite literally turned into corpses. Rather than a Big Bad, this season is framed by a mystery, I only wish the mystery itself could have been as complex or fundamentally compelling as the many villains that have come before it.