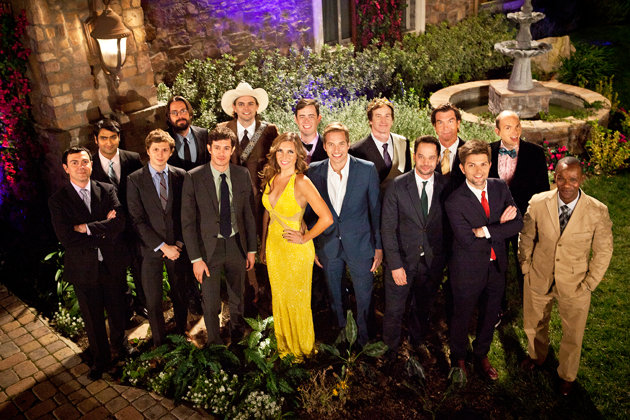 “My plan for tonight is really just to hang out with as many guys as possible and to not go to any of my dark places”.

The line between televised content and web content has never been more blurred. At a time when the big tv networks are scrambling for anything that resembles a hit, and the golden days of the 90’s get further and further away, creators have flocked to the internet with new and original content. A web series will have the freedom and flexibility that a network show will never have, and this is a remarkable incentive for creative minds. This is the system that has given birth to Burning Love, which just returned with its second season. Burning Love is a faux-reality show that parodies the Bachelor/Bachelorette franchise, done in the style similar to Adult Swim’s  Childrens Hospital and NTSF:SD:SUV. This means 12 minute episodes, a bevy of celebrity guest stars, and generally hilarious output on a micro-budget.

Burning Love is executive produced by Ben Stiller- who made a cameo in the first season as a previous bachelor- and created by comedian and The State alumni Ken Marino, who also starred as the first season’s bachelor. The show premiered at yahoo.com last June, and is the first web series produced by the popular search engine as they try to expand in the age of new media. The show quickly established a following as a result of the very funny writing, and fictional contestants played by Kristen Bell, Malin Akerman, Carla Gallo, Jennifer Aniston, and Ken Jeong. Yes that Ken Jeong.

Season two will follow season one runner up Julie, played June Diane Raphael of NTSF and UCB fame, as she searches for (fictional) love with over a dozen (fictional) contestants. The list of actors portraying the contestants is really astonishing, and features Adam Scott, Jerry O’Connell, Adam Brody, Michael Cera, Colin Hanks, Martin Starr, Paul Scheer, Nick Kroll, and Kumail Nanjiani. Throw in Michael Ian Black as the smarmy host Chris Harrison, and it becomes clear that this show has completely stacked the deck comedically.

Yahoo released the first two episodes of the season together as an extended premiere, and the show wastes no time getting right to the funny bits. June Diane Raphael plays bachelorette Julie as a character who clearly has deep-seated issues right underneath the surface, and when she cracks it is scary and funny at the same time. The first episode really is a chance for Raphael to play off all the male contestants, and react to their distinct eccentric personalities. Kroll is a standout as a drunken hurricane of a person, Adam Scott is charming as always, Michael Cera and Adam Brody made me look beyond their established comedic personas, and Jerry O’Connell remains startlingly attractive.

In the second episode, “Julie” brings the contestants to a group activity, which turns out to be a puppet show. At this point, the (fictional) backstabbing among the contestants has already begun, and the puppet show goes awry almost immediately. This is the first opportunity for Raphael to completely let loose as her “damaged goods” character and just go for broke. It’s funny and terrifying as she screams at the contestants for turning her puppet show into drama-filled nightmare.

Burning Love is a great show. It is consistently funny and well produced. So well produced that there is a contingent of people commenting on the show’s website who sincerely think that this is an actual reality show, and criticize it for it’s obviously tongue-in-cheek elements. This only speaks to the level of commitment on the part of the cast and crew to make this a great program. Just as Childrens Hospital moved from the web to Adult Swim, it was just announced that Burning Love would start airing episodes on the E! Network, which will give the show huge exposure and the opportunity to confuse even more viewers with its faux-reality premise. And more people will get to see June Diane Raphael, who is an incredible comedic force. In this season, it’s really her show and she does not miss a single opportunity to commit completely to the most absurd situation and deliver a great performance. Burning Love is very funny show, and really should not be missed.