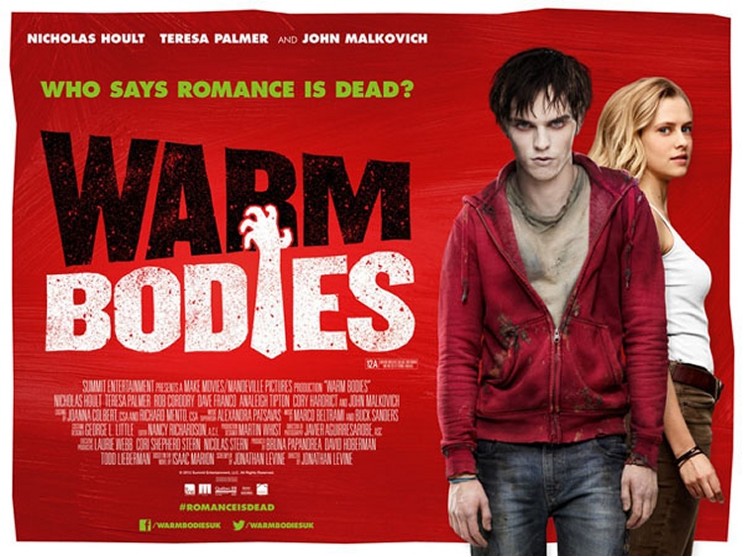 “There’s Nothing Hotter Than A Girl With Brains”

Warm Bodies is a movie simultaneously blessed and cursed by Twilight. There’s absolutely no doubt in my mind that the widescreen release of the Nicholas Hoult-starring zombie-romantic-comedy owes its budget, profile, and probably its very existence to the success of a certain sparkly set of vampires with romantic problems. But given the number of times I’ve heard people and entertainment sites call it “Twilight with zombies,” I think it also has to fight an uphill battle with the audience that should really love it – an audience jaded with paranormal romance by mormon vampires, mooney eyed werewolves, and an entire disturbing section of Barnes and Nobles, disinclined to give this movie the benefit of the doubt.

First off, let me say, I get it. Nicholas Hoult is a British-born child star already in one major franchise with cheek bones that won’t quit. And Teresa Palmer has ALWAYS born a terrifying resemblance to Kristen Stewart. And although I enjoyed the quirky, clearly comedic trailer for the film, there was definitely a part of me that worried about how much more soulful teenagers who love each other- but also maybe want to eat each other- I could take.

But let me cut through all that bullshit for a moment. Warm Bodies is an absolutely adorable, often hilarious gem of a tiny movie. It features great acting, including a breakthrough performance by Nicholas Hoult* as a zombie slowly unzombifying himself and two great supporting turns by Rob Corddry (as a particularly hilarious zombie compatriot) and Analeigh Tipton (as the love interest’s sassy best friend, which should feel cliché but is just fun). It proves that the human love interest in a paranormal love story doesn’t have to be a useless damsel; Teresa Palmer’s Julie is competent, funny, and immensely human throughout. And it includes an extended Shakespeare reference that makes you feel smarter for having gotten it.

It’s also really funny. Especially in the early  part of the movie, it almost serves as a satire of the typical girl-meets-the-undead love story. Hoult does an especially good job at selling the absurdity of a zombie trying to think his way out of zombification, and his comic timing goes a long way towards convincing the audience to go along with the sappier moments. And there are sappy moments. This isn’t Twilight, where every moment is over-saturated in soft pink lighting and oppressive scoring, but it is an incredibly hopeful movie where the message is “love can literally fix the dead.”

The ending is both less original and less funny than the first 3/4s, but it doesn’t ruin what came before it. In fact, if you’re willing to give up your hard-earned cynicism and just go with it, the ending will leave you all sorts of warm and fuzzy. It’s going to be written off by a lot of people, and that is their loss. In the midst of the cinematic doldrums that are January, February and March, Warm Bodies is a rare gem of a film, and the best zombie-romantic-comedy since Shaun of the Dead.

*If you’ve seen Skins, then you know that this is NOT actually Hoult’s breakthrough role because he was absolutely electric as Tony. And even more technically, if you saw About a Boy, you knew he could sell awkward, fish-out-of-water comedy, but he was 12 at the time, and a surprising number of actors lose their comic chops with puberty.