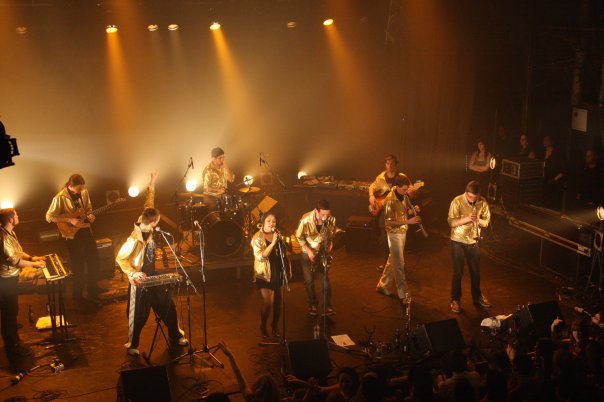 I don’t like electronic music. You can call it house, electronica, dance, synth, trance, or whatever else you want. The point is, it’s just never been something that appeals to me. As a result, when somebody brings up Daft Punk, the two things the pop up in my head are a cartoon music video with blue people, and that Kanye West song. Last year, some friends of mine went to a club to see a Daft Punk tribute band, and while they tried to convince me to go, my musical snobbery won and I sat that one out. For the past year since that show, I’ve had to hear over and over again how amazing it was and how stupid I was for not going and how I had to go see this band the next time they played. What I hadn’t realized was that the whole point of the group was that they played Daft Punk songs using actual live instruments, which is what finally peaked my interest. This is how I ended up at Lee’s Palace at Bathurst and Bloor one Friday night in January, waiting for The DPT to take the stage.

The DPT are from Toronto and met at Humber College, making it a hometown show that I was attending. They formed as a jazz –based ensemble and have been performing across Eastern Canada since 2008, selling out shows in Ottawa, Montreal, and, of course, Toronto. And even for someone as biased against electronic music as I am, it only took till about half way through the first song for me to grasp the appeal.

The DPT are phenomenally talented musicians. The nine-piece group has the traditional drums-bass-guitar, and then two keyboardists, two singers, and a horn section. Every member gets their moment in the spotlight, with keyboard runs, dueling horns, and vocal aerobatics punctuating the steady beats from the rhythm section. For my money, the horn section completely stole the show. Consisting of a trumpet player and a saxophone player, they also sang backup vocals and performed synchronized dance moves. They continuously interacted with the audience and were obviously enjoying themselves and having a great time.

The show started with a couple big Daft Punk hits, familiar even to non-listeners like me. From the opening lines of “All Around The World” the dance floor in the centre of the room instantly became packed, while “Harder, Better, Faster, Stronger” elevated the energy even higher. The band was excellent at playing the crowd, especially during the slow down part of show, leading to plenty of hipster-on-hipster grinding. This is also when the trumpet player switched to an EWI (Electronic Wind Instrument, I actually had to look up what that stood for), and suddenly went off on a solo that could challenge Eddie Van Halen, leading to a huge ovation from the audience.

The DPT played until after 1:30, but the crowd was so into it they probably could have kept going for hours if they’d wanted.  Everyone was enjoying it, even me and my stubborn bias against dance music. The climax of the show came during “One More Time” as the band drew out the slow part of the song, letting anticipation build throughout the room. When the full band came back in for the big chorus, the dance floor exploded.

If you’re fan of Daft Punk, this show would be the highlight of your entire month. The DPT were faithful to the original songs, and put on a highly entertaining show. I was won over by the technical proficiency of the musicians, and everyone single one of them was a great performer. The DPT are from Toronto, so I’ll probably have another chance to see them, and I’ll go just to see that EWI solo again. It was pretty cool. If you like Daft Punk and dance music, you should seek out The DPT, you won’t be disappointed.