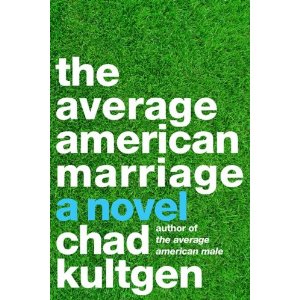 Or they could be, viewed in a certain light, with a certain kind of humor. Depending on who you are and how effectively (and consistently) you can remind yourself that it’s a satire—a work of fiction.

Basically, The Average American Marriage is a satirical EveryBro account of an “average” marriage and infidelity. Our unnamed EveryBro narrates his thoughts on his wife, his marriage, and the hot intern at his office. The novel has lots of scatology, lots of sex, lots of cursing, and is what some people might call (I’m sure have called) an “unflinching” portrait of the “average” American male. It is a novel—a construction. I may belabor that. And even if I don’t, I have a lot of Thoughts and Feelings. Brace yourself.

I read The Average American Male years ago, when it first came out, and I haven’t read it since. That all said, I remember it pretty well, and more specifically, remember the messy bolus of emotion that it incited.

I didn’t have a lot of fun reading The Average American Marriage. It’s not a laugh riot for me, personally. That’s not my humor. Much like the first novel, reading this book felt a lot like getting dragged over sand paper. And having read the first one, our EveryBro’s shock and awe vulgarity wasn’t … Shocking. It was just there.

It’s easy to see how this book could be seen as offensive just for the language alone. We’ll get to the other stuff.

The basic plot is nothing special–actually, given the title, it’s pretty much exactly what you’d expect.

Ladies and Gentlemen, The Plot:
EveryMale is married. Has two young Kids. Since having The Kids, Wifey (Alyna) has been less interested in The Sex. EveryBro… or EveryMale? Whatever. Our Narrator jerks off a lot. EveryDude’s office needs new intern. Our Narrator hires the Hot Girl (Holly) he interviews. Our Narrator conducts affair with Holly the Hot Intern. Wife finds out and kicks AvgMale out of house–she doesn’t let him see The Kids. Blahblahblah, AvgMale continues affair with Holly. As Alyna serves him divorce papers and malaise of abnormal, living-out-of-hotel life creeps in, AvgMale wants his married-with-kids “normal” life back. Prostitute of Wisdom (I’m serious) tells him that he could have gone home this whole time—all he needed to do was click his heels three times and say, “I’m sorry” (at this point I may be embellishing slightly). EveryBro says sorry. Wife takes him back. He reflects again on infrequency of sex with Wife and likelihood that one day he will again grow bored and dissatisfied and will cheat again. The End.

Anyway, point is, the plot is there, but it’s not the point. The point is a modern Everyman amorality tale to challenge assumptions, to (potentially) offend, and to make people think.

Just now we started to get into the tricky issue of authorial intent. These are my best guesses and my interpretations. For all I know Kultgen may be reading this and cackling (after all, his ex-girlfriend read his first book, recognized herself in it, and wrote a book of her own in response).

Moving right along. I keep calling this an Everyman tale and calling Our Narrator variations on that theme–because, aside from proper names and some knowledge of John Larroquette, Our Narrator could be virtually anyone. AvgMale has no interests other than sex and video games, no defining characteristics apart from his nihilism, and no distinctive career (he’s an office drone). Our Narrator is the bare bones of an “average” American male.

While I think Kultgen’s novel does model its structure after certain Everyman tales, the idea is also misleading. After all, is The Narrator really universal the way the Everyman is supposed to be?

First of all, AvgMale’s of a certain age. He’s in his mid-thirties in a generation that has Facebook but doesn’t use it all the time. He is of a certain socioeconomic class. He lives in a house. His wife does not work. He has a mortgage. He makes no mentions of financial struggle and buys Hot Intern Holly a $1200 Mac Book Pro more or less on a whim. He’d probably call himself “Middle Class”. There is no mention of race in the book, but at the very least AvgMale is a middle/upper middle class mid30’s man in a suburb of California. And of course, AvgMale is a straight cis male.

So AvgMale is not a billionaire, not anyone who frequently thinks about their own race (whatever that means–the assumption in this case is probably Caucasian, but Mr. Average could just not think about it), not poor. In this sense, AvgMale is average, but let’s not make the mistake of taking average to mean universal or near universal.

Before I implied that the language wasn’t the only thing that certain people might find offensive. Sex is whatever. Biological imperative, etc. But the Narrator’s attitude toward women, specifically, is what is striking and prevailing. The Narrator is a womanizer. He makes rape “jokes”–the air quotes are there because they’re not actual jokes so much as he just uses the word “rape” a lot when he’s trying to emphasize how horny he is. He never describes women’s faces–as a reader you assume each of them has two eyes, a nose, and a mouth, but AvgMale never bothers to say, so I don’t know, maybe in the next book we’ll discover that his wife is actually a Cyclops (um, that would be great. And maybe it’s an alternate universe and everyone is green! I would at least have fun with those books). The Narrator of the book pretty uniformly categorizes women according to the “hotness” of their tits and asses, or their sexual worth to him. And that’s pretty much it–every once in a while hair color is mentioned.

A lot of the book feels like bait for easily incensed feminists–you know, “ha ha! the feminist is angry, isn’t that funny. Chill out. It was just a joke. God” (I take full responsibility for those projections). But even if it’s not bait, per se, the novel is meant, I think, to evoke a strong response. Otherwise, why limit yourself to such a tiny and repetitive vocabulary? Why not edit all of the redundancies?

What I’m saying is: Even if the book is reflective of “typical” or “average” attitudes in a lot of ways, it can’t be true average because it’s inherently an exaggeration for the sake of performance—for the sake of getting a response.

Here’s where the construction comes in. Because of the coarse language, the confessional format, and scant hints about Kultgen himself in the book (he has a note in the back, thanking his sister for getting married and having kids so he doesn’t have to; there was the whole real ex-girlfriend in the other fictional book, etc.) you are made to ask yourself: How much does Kultgen himself buy in? Does that matter to me?

Every aspect of the novel—including a handful of precisely timed nearly tender, but never “sissy”, musings on AvgMale’s children and his wife—is just enough to make you question whether or not this might be an Esther-Green-is-Sylvia-Plath fictional memoir after all—or if it’s based on a friend, or essentially, if it’s true.

The novel—not in spite of, but because of its crudeness, the unabashed, almost proud, crassness—the very populist, lowbrow, “average” circumstances and trappings, as well as the novel format itself—provokes questions, reactions, and feelings.

For me, that’s point of the novel—and if not the point, then its only real value.

Once more, with feeling: I didn’t enjoy this novel. It’s not my idea of fun reading. It’s not my kind of humor. At certain points, the Narrator’s views and language did make me angry—sometimes I worked really hard to divorce myself (ha!) from being angry (because even if I think I’m right, the feminist tag can get you into trouble. Never mind angry feminism. Is it your time of the month, is that why?). But I think recognizing and grappling with that—the self-censoring impulse (because? Because what? Because Kultgen might not like it? Because it’s a visceral response? Because I’d be missing The Point and taking the bait?) is important too.

The Average American Marriage makes you wonder how much is exaggeration. How normative is The Narrator, really? What is the reality of marriages and gender relations in “average” America?

So, again, I didn’t like The Average American Marriage, but it made me confront myself, and it made me think more than I’ve thought about any other book in a while. That matters.

If you’ve already read The Average American Male, I don’t think you need another dose of what was essentially the same book (unless you really liked it, it is your humor, etc. in which case, go to town). If you haven’t read either, and are interested, go for The Average American Marriage—it’s more far-reaching and interesting than Male, and you don’t need the first novel’s set up to understand what’s happening.