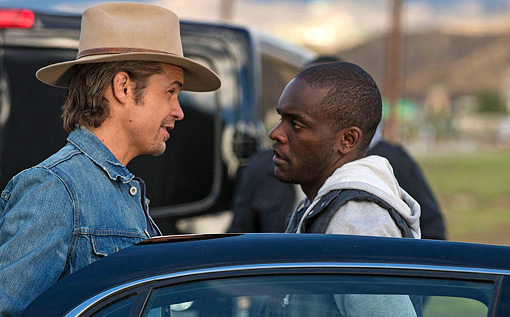 Perhaps combined last weeks over-bloated Justified and this weeks light episode could have made one interesting story. The Drew Thompson Mystery does not appear to be complicated enough to pad out an entire season, and so Raylan faces yet more easily dispatched obstacles. To make up for Raylan’s strange storyline, Boyd attends a high society sex party.

Raylan’s escaped fugitive from the first episode is back – or rather he was six days ago. The episode begins in flashback; Raylan returns Jody to Sharon Edmunds and her partner, only for Jody to escape, kill both Sharon and her partner and escape yet again. This time, with the help of Paul Kinsey from Mad Men! Or rather, Michael Gaddis as Kenneth, a 21st century update of Paul Kinsey who helps Jody for appropriately self-serving, comically pretentious reasons.

The flashback sets into motion Raylan’s inevitable recapturing of Jody. It’s essentially an episode long diversion between the scene following  that flashback –Art convinces Raylan to go to Tramble to question his father and former-Sheriff Mosley – and the last scene, where Raylan finally does go to talk to Arlo. But, more on that later.

Jody’s storyline is completely ridiculous. It starts with a cold-hearted killer, and then ends up involving a badly made home movie where Jody holds a basketball while spouting pithy comments over a heavy bass roll. Raylan easily finds and then unsurprisingly is forced to kill him.

Raylan’s run in with Jody does allow him to do a lot of flirting with a new Pretty Trouble Girl, the improbably named Jackie Nevada. Jackie’s characterization is standardly overdone, with her flat out pointing to her and Raylan’s similarities.

What’s more, the camera lingers on her purse for long enough that they may as well have included a flashing sign saying “IMPORTANT PLOT POINT” – making it clear sadly early where the money (for which Jody escaped) has gone.

All of this is par for the course: Raylan shots another criminal; flirts; is aloof. Raylan’s best scene closes out the episode, with him finally talking to Arlo. Rather than attempting to intimidate Arlo, as was Art’s plan, Raylan asks to work with him.

I said in a previous post that it is a season of ghosts, and in this scene we watch Timothy Olyphant doing an excellent job of Raylan begrudgingly confronting his. Raylan’s many TV-worthy issues all stem from Arlo, and so it is with great relish that Arlo responds to this request to work and benefit together by telling Raylan to eat shit. The episode ends on a shot of Arlo’s face walking away after Raylan tells him, convincingly that not only is Arlo going to die, but Raylan will be glad for it.

Meanwhile, in a very different part of Harlan County, Boyd and Ava hunt for Drew Thompson among the elite at an invite only private swingers party, offering a glimpse into the heretofore-unseen upper class of Harlan.

When Boyd proposed to Ava in last week’s episode, he drove home a series long theme of self-improvement with the larger goal of improving not just the self, but your lot, and your children’s lot. Meeting the upper crust of Harlan, even in a red-lit sex party, Boyd is told outright that Harlan County has a rigid, enforced class system, from which he will never escape.

Boyd has been invited not as an equal, but as a necessary criminal to do the deeds with which the elite cannot dirty their own hands. Not only this, but they tell him that crime itself occurs not against their wishes, but to fulfill them, to, in effect, pacify and distract the unworthy masses. Which includes Boyd.

Unlike Arlo, Boyd’s father is not alive to confront, but he is still present. The elite tell him that his father knew his place, and so to should he. The dream of raising the Crowder name seems impossible in leathered study of the ruling class of Harlan County, where he is told to do their bidding, or they will – and can easily – take away all that he has made.

One of Boyd’s precious holdings is his brothel, where, in a few stray scenes, the Ellen May story continues. Johnny deduces that Colt did not kill her. There is no question that the fact that Johnny (who actively wants to dismantle Boyd’s burgeoning empire) learns this, and that Colt is a drug addict, all before Boyd, is going to be important in the episodes to come.

It is an odd episode of Justified, as Raylan’s storyline is so light it is essentially pointless fluff, filling in time before we continue the stalled search for Drew Thompson.

While this would have been par for the course in previous seasons, Raylan’s storyline does not even bring him back to the Marshal service office, the usual origin of many strange one-off plots. Regardless, just enough is offered up – from Raylan, and certainly from Boyd – as to not make us doubt Justified too much.