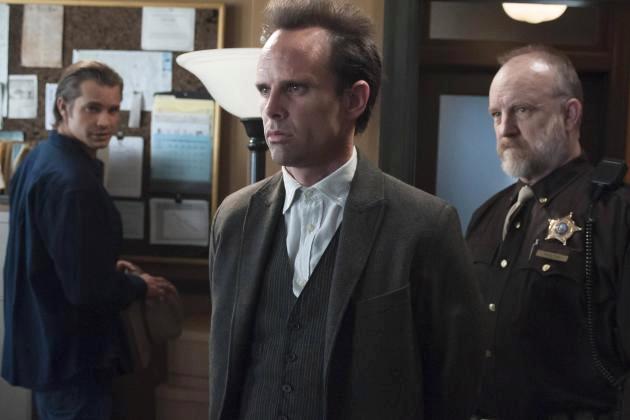 “Footchase” reveals a key problem in Justified’s new direction: without a central villain to organize around, the episode drags along, weighed down by a mess of plots and characters. The Drew Thompson Mystery is interesting in previous meticulously balanced episodes, which the sixth episode certainly was not.

The show struggles to balance the nebulous mass of characters and their respective motivations. There is so much going on that the episode plays like a series of loosely connected scenes. By the time the plots finally do interconnect, it feels less like a coming together, and more like just one more event on a pile of dark, dark events.

In the main storyline, Raylan and Boyd search for Drew Thompson. Raylan, it seems, is barely even in the Marshal service any more, as he spends the entire episode doing police work: searching for Josiah Cairn, who lost his foot in the last episode. In his brief appearance, Art makes a series of excellently self-satisfied foot puns; enough to make us miss him in the show, and to give us the episodes title.

Raylan’s search is full of the usual pile of red herrings – although it does bring him together with Officer Shelby, an unexpectedly enjoyable pairing. Shelby dismissively undermines both Raylan and Boyd’s swaggering, and helps Raylan find Josiah – but sadly no one gets any closer to finding Drew Thompson. Instead, we’re left with yet another person who might know something; the Sheriff who tried to kill Raylan all the way back in Season One.

Boyd, on the other hand, starts off the episode looking for Drew Thompson in his own way – interrogation at gunpoint – but winds up agreeing to Ava’s way of attending a society swinger’s party.

There is a nice scene where Boyd proposes to Ava while solving a mystery set up in the first episode – he has been hiding money from Ava to buy a house. He proposes partially by delivering basically the same speech Mags Bennett did two seasons ago: he is a criminal to invest in the future, that time and money will clean the Crowder name.

I’ve always felt that Boyd and Ava’s relationship was spawned out the writer’s needing to do something with her after she broke up with Raylan, but this development does fit their relationship nicely into the larger Justified universe. Like everyone else, their end goal is not criminality for its own sake, but to rebuild the future.

Boyd and Raylan are vaguely, temptingly brought together when it turns out that the footless Josiah was kidnapped by Boyd (and Arlo’s) lawyer. With an entire episode leading up to this, it seems rushed, as we are snappily shown Josiah, his kidnappers and the reveal of the lawyer – only for the operation to be immediately shut down by Raylan and Shelby.

What truly bogged the episode down was the equal time given to stories that normally would have played as subplots.

Marshal Tim, who we all love, finally gets more screen time. And it’s sadly squandered on a half-told story about an old army buddy in debt and in recovery from a narcotics addiction. The point of the storyline appears to be to remind us of something we already know: Tim should be on the show more. And hopefully in a useful capacity.

On the other hand, we also get to spend a good portion of the episode hating Colton, Boyd’s newest right hand man. Colton struggles through the episode on his own quests: to find heroin and Ellen May. Along the way, he beats up a prostitute, a john and threatens a fellow veteran. He brings a lot of darkness into the episode, and all the time devoted to him serves to dig him deeper in unresolved trouble.

Justified has been driven by compelling villains – so far this season has worked when it kept the origins of the mysteries and drama out of sight, but still on our minds. Footchase, sadly, was undone by the sheer number of factors at play. They pushed the larger questions away in place of the simple query: what’s going on right now again?