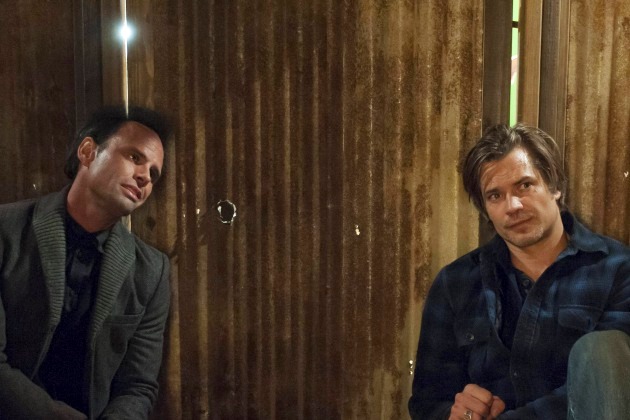 Appropriately, the episode is titled “Kin,” and after last weeks lull, it’s a return to form. Justified’s is built on the premise (thematically; very literally) that eventually everyone must reconcile with where, and who, they come from. But then again, it’s also a snappy character-driven crime drama, so any lofty themes take a back seat to this seasons quickly expanding plot.

Given the title of the episode, all of Raylan’s last remaining kin reappears before the credits even roll. Raylan’s relationship with them – his pregnant ex-wife, his father – is juxtaposed in the opening scene. Estranged from Winona, he attempts to get into her good graces; only to leave her at the doctor’s office in order to spend the episode ensuring that his similarly estranged father rots in jail.

Arlo has come back to cash his get out of jail free card, in the form of information on Drew Thompson, the parachutist that has riled up all of Justified’s disparate camps, both criminal (Detroit Mafia; Dixie Mafia; Boyd Crowder) and legal (Marshal Service; FBI). To stop him, both Boyd and Raylan find themselves trekking into the Kentucky hills.

The hillbillies are introduced like the Others on Lost, appearing out of nowhere to throw a bag on your head and throw you in a metal crate. Like the Others, the rules of the systems in which Boyd and Raylan operate no longer apply.  But, luckily for both, the bonds of kinship run deeper than all those interested camps. Raylan’s aunt saves their hides, and delivers what is sure to be important plot information: Drew Thompson is indeed alive, and in Kentucky, just not on this particular hill.

Other notable plot points are almost casually dolled out: reoccurring FBI Agent Barkley casually shows up as an old friend of Nick Augustine, the newly introduced representative of the Detroit Mafia. Just as casually, Augustine splatters the FBI Agent’s brains on Wynn Duffy’s trailer office. In between, they reveal that, in fact, Drew Thompson didn’t just witness Theo Tonin shooting someone – he shot Tonin, and stole $2 million worth of cocaine.

Behind all the development in the larger storyline, Colton searches for Ellen-May. There’s a nice scene between Colton and Marshall Tim, as the two compare service records, and their very different post-military paths are quietly contrasted without any glaring moralizing.

It turns out that Ellen-May is being hidden by Shelby, the Sheriff that Boyd helped get into office last season, and who now wishes to be free from under Boyd’s thumb. While the centerpiece of the episode is clearly Boyd and Raylan bickering with hillbillies, the side plots remind are a nice reminder of what’s at stake in Justified.

Boyd and Raylan both strive to be lone wolves, ruling independently and coolly in their own private kingdoms. Unknown to Boyd, his power is threatened within and without: Shelby’s talking to Ellen-May and cousin Johnny is talking to Wynn Duffy.

No matter how badass they are, both Raylan and Boyd are bound to their kin and their pasts.

It’s a season of ghosts. The characters are menaced by a mafia put at risk by a man they thought dead, and our hero and anti-hero are similarly haunted not only by their own past indiscretions but those of their kin.