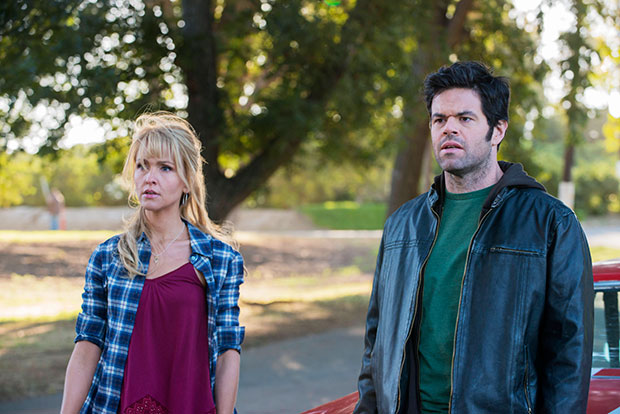 This weeks Justified was an inevitable lull. The plot this time around wraps up the loose ends created by more than a few birds flying the coop. The episode has little to do with the overall season, and winds up seeming a bit out of place with some badly delivered dialogue and inevitable outcomes.

We spend half the episode with Raylan and Rachel on the hunt for Raylan’s very newly ex-girlfriend, Lindsey. The Rachel and Raylan dynamic is a welcome return to the show, especially given this season’s new focus on the other marshals in Raylan’s office.  A previous episode established Rachel’s recent divorce, and this episode sees her venting some frustration by accompanying Raylan as he tracks down money he shouldn’t have and the girl who stole it.

I found this half of the episode a bit lackluster, as neither Lindsey nor her ex-husband/partner in crime (Randall) are particularly compelling characters. Randall in particular sticks out during an early scene while trying to spend Raylan’s money, his delivery of Justified’s usual snappy macho-swaggering dialogue is clunky and forced rather than threatening.

Lindsey’s character, as a love interest and plot point, never really rose above ancillary, which makes it hard to swallow the resolution that Randall offers when he tells Raylan, while both bloody and abandoned by Lindsey, that “at the end of the day she’s still kinda worth it.” Instead, one of the few amusing moments in this dark episode comes when Raylan, just before passing out, smugly tells Lindsey that he knew she liked him. Raylan’s story ends on a somber note, with him taking his sore sad self back to bed, but this is exactly what makes the show work. Raylan’s ego drives the show, for him to be the badass we believe in, his introspection can go no further than satisfaction in knowing that the pretty girl liked him.

Elsewhere in Harlan County, Boyd and Ava are forced to deal with Ellen-May following the dissolution of Billy’s church. Sadly, this storyline feels similarly forced and unnecessarily drawn out. It seems inevitable from the beginning that Ava will ask Boyd to kill Ellen-May as each of Ava and Boyd’s interactions through the episode boil down to Ava asking Boyd to justify to her that she’s righto want Ellen-May killed.

It feels like a lost opportunity to flesh out Ava’s character, as rather than having her struggle through the episode, they have Boyd offer option after option. Like the pointless plot obstacles in the overall Lindsey plotline, it detracts from what could have been some interesting character development. Ava has long crossed sides and joined Boyd, but this would have been her first kill for the sheer purpose of protecting her own interests. It would have been worthwhile to see her weigh that decision, rather than simply come to it at the end of the episode.

The episode is filled out by lots of small, bleak scenes: Colton snorting drugs in a dirty washroom alone; the close up of Ellen-May’s happy fingers out the car window believing she’s going home; the convenience store owner’s sadness over Lindsey after being beaten by Randall.

In the end, both Ellen May and Lindsey escape their very different predicaments, and both disappear off-screen, in unknown directions – though both would be better off far away. Perhaps that’s just wishful thinking, as we wait next week’s episode, and hopefully a return to form on Justified.