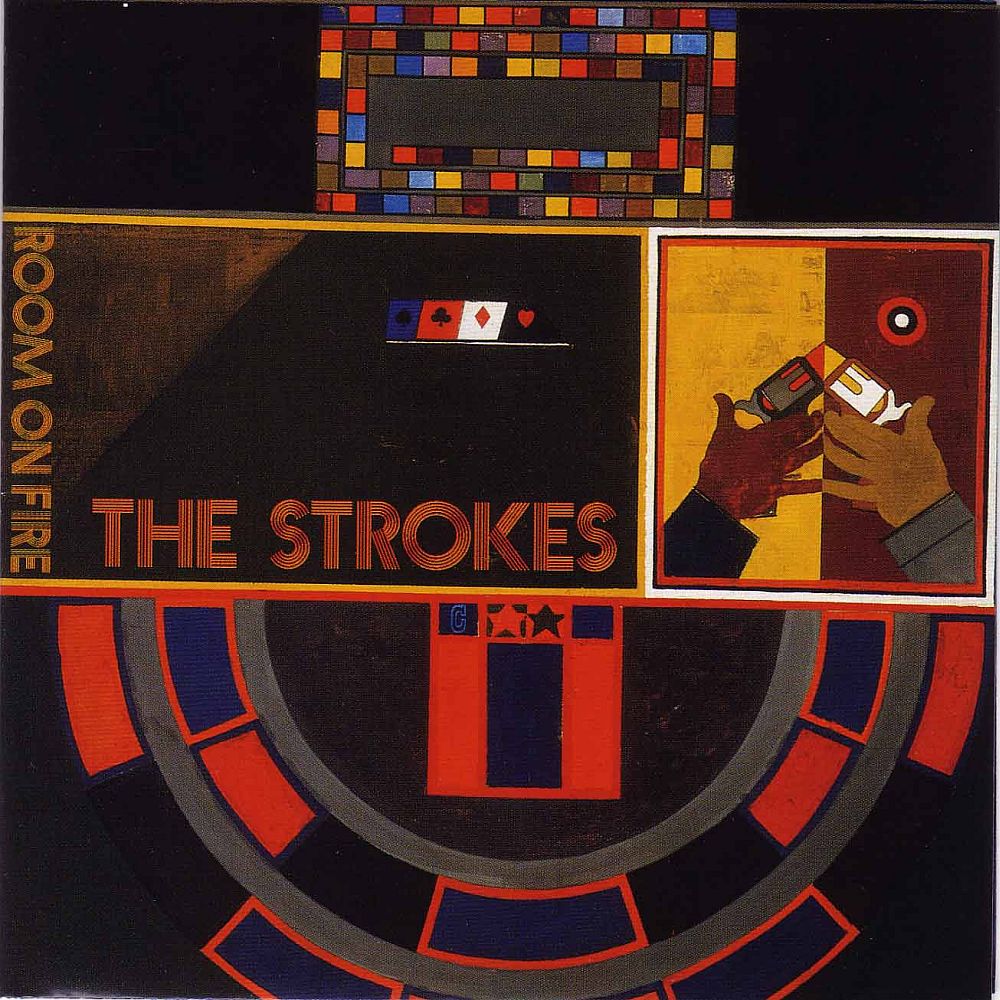 Julian Casablancas and the boys are back, or, they will be in March.  The internet was graced last week with “One Way Trigger”, the first track from the band’s anticipated fifth studio album, Comedown Machine, and already favorable comparisons have been drawn with A-ha (“Take On Me”) and Maná (“En el muelle de San Blás”).  But before I delve into this refreshing dose of synth and falsetto, there is another important issue to which I would like to attend.

A very important album turns ten this year.  That album is Room On Fire.

In 2003, the Strokes did the unthinkable: they followed up the near-flawless critical and cultural smash of 2001′s Is This It? with a record that many consider to be even better.  With Room On Fire, the New York quintet hurled a brick through the glass ceiling of the Sophomore Curse, somehow managing to adhere to their original vision and style while simultaneously flying in the face of naysayers who dismissed their first outing’s success as “lucky” or “formulaic”.  No, The Strokes were back and they were better than ever.  The year was 2003.

The year was 2003: 9/11 still fresh in the global collective consciousness, George Bush with five years left on the clock.  Franz Ferdinand, The Hives and The Vines could be heard pouring out of radios everywhere — there still were radios everywhere — and Pete Townsend was arrested on suspicion of child pornography.  (Sidebar: boy did he ever recover from that one.)  Tatu (Tatu!) had a number one hit with “All the Things She Said” and war loomed in Iraq.  March saw the end of Saddam Hussain’s regime, and May, the famous “Mission Accomplished” speech (wherein the then-president declared an end to the Iraqi conflict…).  Arnold was elected Governor of California.  This all seems like such a short time ago, and such a long time ago.

As I sit typing this out, Room On Fire is playing in the background for inspiration, but also because it’s just such a damn brilliant album.  And here’s where this becomes less about The Strokes and more about me: this album was insanely instrumental in my young development.  I was fifteen in 2003 — a child — and Room On Fire was the opening of my eyes into the realm of possibilities inhabited by rock and roll at the dawn of the new millennium.  Too young to appreciate Is This It? when it first dropped, I was quickly infatuated with the second record: Casablancas’s nasally growl that sounded liked it was phoned in from an underground bunker; Albert Hammond Jr.’s laconic power chords; Nick Valensi’s sinewy lead lines; Nikolai Fraiture’s punchy bottom end and the metronomic perfection that is Fabrizio Moretti.  Each perfect song different from the last while still sounding, emphatically and irrevocably, as a verifiable part of a whole.  None of them longer than four minutes!  The towering single “Reptilia” comes the closest at 3:42, it itself an unrelenting masterpiece of thundering bass and flawless guitar lines, hurtling along at a breakneck pace only to end the way it started.  I could go on.

It was on the Room On Fire North American tour that I attended my first real rock concert.  Two close friends and I hopped a GO train from Union Station in Toronto to Mississauga where the band was, inexplicably, playing the Hershey Centre.  It was a miserable October night, bitterly cold and raining horizontally when we disembarked.  We were running late, but dismissed this with a wave of a hand and the ever-present platitude of the gig-going public: “There’ll be an opener, and they probably won’t be any good.”  We had probably heard it in a movie, or something.  So when we finally reached our destination, and passed through the barricade clutching our ticket stubs and shaking water from our teenage mops, I was surprised to see my friend Tom freeze in his tracks.  He cocked an ear, listened for a second, and then looked my other friend and I square in the faces.  “Run,” he said.

Now, we all know what happened to these guys — and I’ll allow a moment of silence or pause while we all pour out a drink for the homies who went up the river — but you gotta remember: this was 2003.  In 2003, the Kings of Leon were about to explode and, for a few short years, would exist as the band every boy dreamed of being in when buying his first guitar.  We had precious little time before they grew into the pandering mopes that we would learn to hate!  And it was all happening onstage for us that night.  They were a blur of feverish intensity, a wild gyrating mess of breaking strings and flying hair and whiskey and cocaine and utter reckless abandon, kicking amps and kicking ass and taking names.  We only caught the last two songs of their set, but I was infatuated.  This was music, this was living (man)!  Whatever happened to the Kings in recent years (I still cringe when I think of that video they made frolicking with a bunch of black children wearing linen in some hack director’s vision of “The Authentic South”), I will always treasure that one perfect moment in October when they were truly the shitkicking rockers they professed to be.

The Strokes began their set with a seminal classic to any true fan: “Under Control”.  The four rat-tat rim shots that start that tune started the show and we all gasped as the set began, not with the furious passion of “Reptilia” or the synth-tinged reverberations of “12:51″ (both monstrous hits at the time), but with a subdued little ditty, the guitars lagging ever so slightly behind the lazy hi-hat and Julian croaking along with that perfect balance of wit and weariness that only he can conjure.  “I don’t want to waste your time,” he sang, “but we’ve worked hard, darling.”  One of my friends would later say that Casablancas was the only man for whom he would compromise his heterosexuality, and thinking back on this night, I’m inclined to agree.

The rest of the gig is a blur of perfection in my mind.  The Strokes catalogue was not particularly lengthy at this stage, so we heard every song.  Every.  Song.  They were so tight they seemed ripped from the pages of The Sun Also Rises.  NB, To the two people who like that reference: email me so we can be friends.  Each song bawled from the amplifiers with a low-fi intensity that seemed to enhance, not impede, their sound.  And thinking back on that record, what songs they are!  The brawling schizo of “The Way It Is”, the wry, telephonic “The End Has No End”, which builds to a perfect crescendo and then holds back, rides the edge instead of plunging over it.  The opening track!  “What Ever Happened?” is such a perfect start to a record that I have not since heard its equal: “I wanna be forgotten / and I don’t want to be reminded / oh please, don’t make this harder / no, I won’t yet.”  The criminally underrated “Automatic Stop” with its three (count them!) intersecting rhythmic and melodic counterpoints leading into that song with its Tron-ripoff video … and I could still go on.  This was extravagance harnessed; frivolity in chains; irony and attitude in jeans and a skinny tie.

My mom picked us up from the gig that night and I sat in silence the whole way home, watching the rain lash the windows and playing back the whole set in my head.  I was stone-sober.  Probably the last time I saw live music without even a single solitary cold one.  The next day I woke up, put on the album, and have been listening to it, very regularly, ever since.  It’s worth mentioning that the album art and design is a work of art in and of itself.

I started off wanting to review the new single from Comedown Machine.  So, here: it’s good, it sounds like The Strokes, and I love this band enough that ANYTHING they produce I will listen to, and probably enjoy.  After all, in the interim between First Impressions of Earth (2006) and Angles (2011) we got two solo outings from Hammond, Jr., a side project from Nikolai (the brilliantly-named Nickel Eye, and would you believe it, they’re pretty good?), Casablancas’s psychedelic synth-opera Phrazes for the Young (2009) and — the undeniable classic — Fab Moretti’s Little Joy outfit with Binki Shapiro and Rodrigo Amarante (of Los Hermanos).  Some of these are palatable, and some, like Little Joy, are themselves totemic achievements.  So now we have a new Strokes record to look forward to, and it will probably be great, and probably not as good as the first two, and that will be fine because it’s The Strokes, dammit.

Room On Fire is a true timepiece, a masterwork from the first staggering years of the new millennium with a sound at once archaic and futuristic, born of the curious commingling of past and “future” that typified the three years on either side of Y2K.  Even typing ‘Y2K’ carries echoes of this same nostalgia for me – it’s phrases like this one, like the “information superhighway”, that hold such charming power a decade on.  So let us all celebrate the 10-year anniversary of an album that is an unrelenting pleasure to listen to, now and forever.  The end, truly, has no end.