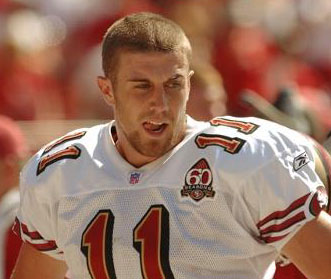 There has been an overwhelming spotlight on where quarterback Alex Smith will end up come the 2013 NFL season. Many teams, such as the Chiefs, Cardinals, Jets, Browns, and Jags, all have shown interest in the former first overall pick from the 2006 NFL draft, but which team will win the Alex Smith sweepstakes?

Realistically, there are only three prominent landing spots for 49er’s quarterback: Arizona, Kansas City, or Cleveland. Cleveland have a couple of cheap quarterbacks in their organization- meaning McCoy, and 28 year-old sophomore Weedan – but none that have established themselves as starters in this league. Given the fact that Weeden has a cap hit slightly over 2M, and McCoy slightly less than that, the Browns, financially, should have no problem obtaining the high caliber quarterback Smith. Also, Smith was successful while relying on the run game in San Francisco; so given that Trent Richardson is the future of the Browns running attack, it will give Smith an easier time adjusting to their schemes if Cleveland is to acquire him. However, it doesn’t seem so evident that the Browns are willing to put a halt on the Brandon Weeden project, after making him a first round pick last April.

As for Arizona, they have a history of trading for a “franchise” type quarterback and having it backfire. Does Kevin Kolb ring a bell? Kolb, signed through the 2017 season and is set to make 13M this year. However, Kolb has been plagued with injuries and has only started fifteen games since coming to Arizona in a trade two seasons ago. Alex Smith’s cap hit is 9.7M this year; having both Kolb and Smith would cost the Cardinals over 20M in cap for two players who have yet to prove that they can win on a consistent basis year-after-year. There has also been chatter that new Head Coach Bruce Arians wants to bring in Drew Stanton whom Arians coached last season in Indianapolis. Smith may be a better quarterback than both Kolb and Stanton, but does Arizona really want to risk another trade turn bad at the quarterback position? My bet is no, and it will be an open competition at QB in Arizona this year.

The most prominent destination for Smith to end up would be Kansas City. There has been a lot of talk the past few weeks on a potential deal that could have Smith sent to the Chiefs come the start of the league year on March 12th. New Head Coach Andy Reid has made it his off-season goal to find a quarterback for the last-place Chiefs. A similarity between San Francisco and the Chiefs is the strong run game with Hillis and Charles. Alex Smith thrived with an excellent run game, and a coach that believed in him. Andy Reid has been a quarterback guru coach for many years pumping out good quarterbacks like McNabb, Vick,  even Kolb, and most recently Nick Foles. The Chiefs currently hold the first overall pick and since there is no clear-cut franchise quarterback many believe they should cash in on either offensive tackle Luke Joekkel or Eric Fisher to keep whoever starts as quarterback day one upright and on their feet. Kansas City seems to be the best scenario for Smith, and it’s clear that they want him in a Chiefs jersey come the start of next season.

Which team is willing to give up the most assets, who wants him most, who will win the Smith sweepstakes? Only time will tell where the 2006 1st overall pick Alex Smith will land come September.