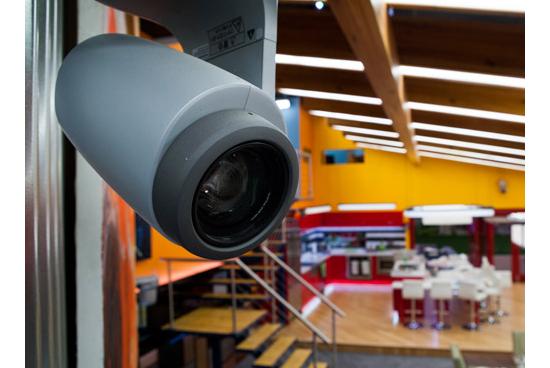 Last week, ET Canada gave us a grand—albeit very brief— tour of the Big Brother Canada living quarters. Of course, producers don’t want to reveal too much before tonight’s premiere and ruin the suspense for viewers and dedicated fans…They just wanted to reveal enough to increase our anticipation and excitement for the show’s debut.

The house is designed and decorated in a tasteful, cozy, and elegant manner, and has a mid-century modern look. During the tour led by the lovely Arisa Cox—Big Brother Canada’s host—we are informed that there are only seven beds and fifteen houseguests, which leaves me wondering- just what are the producers trying to provoke? After all, everything in the Big Brother house is always done strategically, and with a purpose in mind. Perhaps they’re trying to provoke a turf war, and ignite drama from day one, as houseguests fight over who gets the luxury of sleeping on a bed, and who ends up on the couch—or worse, the floor. I imagine, considering how important sleep is, that this will be an ongoing drama. I have to admit that I’m curious to see how this drama will unfold as I tune in tonight at 9pm.

Indeed, the entire house seems to be designed to provoke conflict or drama on one level or another. Houseguests on Big Brother America live in hot Los Angeles during the summer months. In contrast, houseguests here in Canada get to live in sub-zero temperatures in the dead of a Canadian winter.

Although Big Brother houseguests in the United States sometimes swelter in the unyielding heat of a California summer, they have a fairly comfortable backyard equipped with a pool, a hot tub, workout area, etc. And even though they’re surrounded by, and enclosed in, large concrete walls (reminiscent of jail)—they still have a very nice, and large backyard to lounge in, and even get some space away from fellow houseguests. That backyard has helped lots of the US houseguests maintain their sanity during stressful times.

I feel sorry for Canadian Big Brother houseguests. Their outdoor space feels more like solitary confinement. Instead of a “backyard,” guests get a “deck” complete with a hot tub and towering concrete walls that seem to go on forever. The only positive thing in this picture is the hot tub.

But where are houseguests to go when their roommates are grating on their nerves? When they’re on the verge of breaking down and need some personal time alone to reflect? The answer is “nowhere”. There is literally nowhere they can be alone, gather their wits, and garner inner strength. Due to the frigid, wintery conditions, houseguests are less likely to want to spend time outdoors—unless they’re in the hot tub, which can only seat a few people at a time. Because the Canadians are forced to be inside more than their American counterparts—who get to lounge outside and soak up the California sunshine- Canadian houseguests are bound to feel cooped up and, consequently, grate on each other’s nerves. They will definitely feel more cramped and claustrophobic than American houseguests ever feel—and tensions are certain to rise throughout the season.

Despite missing an outdoor workout area, a large pool table, patio with comfy lounge chairs, and a sizable yard to run around in (and to release tension in), Canadians still get a pool. The only caveat here is that the pool is part of their larger indoor living space. Therefore, most of the so-called, traditionally “outdoor” space is really “indoor” space—the pool is essentially an extension of their living quarters.

Maybe it’s only fitting that Big Brother Canada will take place during a quintessential Canadian winter. Perhaps this is what will make the show “really” Canadian, distinguishing it from its American counterpart. After all, we’re famous—or even infamous for—our cold, brutal winters.