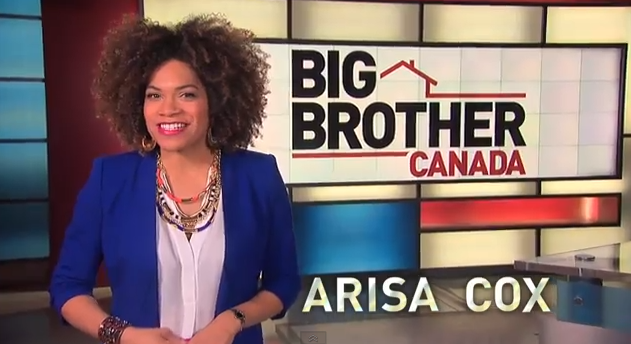 In an exclusive interview with Slice.ca Arisa Cox says, “Big Brother is the centrepiece of the modern reality-show age. It’s been airing for 14 seasons in the States. It’s always on—it’s in 87 countries. And we finally got one here in Canada…”

Arisa is the new host for the much-anticipated Big Brother Canada, debuting tonight, Wednesday, February 27th, at 9:00 pm on Slice. After studying journalism at Carleton, Arisa made her name as a TV personality in Toronto co-hosting the entertainment news show E!News Weekend from 2007-2009.

As Canadians get ready to watch the premiere, many of us are wondering how the Canadian Big Brother will compare to its hugely popular American counterpart.

Before the first episode even airs we know one thing for sure: Arisa Cox is nothing like Julie Chen, the American host. In fact, she is quite opposite from her.

Further on in the Slice.ca interview, Arisa states with sincerity, “I really want houseguests to look at me as someone that they can chat with. I wanna be the girlfriend on the couch. I wanna know the nitty-gritty—if there’s a showmance…”

Reality show hosts tend to be very bubbly, friendly, and open. Julie broke the mold, however, by being fairly detached, objective, and unemotional—almost “news-like”—with the American BB houseguests. When I watched the first season of Big Brother over ten years ago I was very surprised that she was picked to host the show, because she was so different from all the typical TV hosts I’d seen to that date. I wasn’t only surprised, I wasn’t impressed. I thought for sure that she would not gain the popularity she has gained, because her cool, no-nonsense, and direct approach was not engaging for fans or the houseguests. In fact, I thought her style was uninteresting—even boring.

But this approach, however counterintuitive it may be, has not detracted from her success as a host. In fact, she has garnered a lot of popularity and respect with not only houseguests as they change from season-to-season, but also with the fans at large. She’s become an integral part of the American BB brand, one of the only constants in a show for which “expect the unexpected” has become a motto.

Will Arisa Cox have the same impact, and garner the same level of popularity that Julie Chen has? That remains to be seen. However, Arisa’s lively, vibrant, and youthful personality already fits with the younger Canadian Big Brother guests—most of whom are either in their 20s or 30s. It’s clear that she plans to situate herself quite nicely as a peer, an equal, and a confidant to the Canadian houseguests. It will be interesting to see how this approach plays out as the season progresses—especially in comparison to Julie’s approach. I believe that Arisa’s friendly and engaging personality will be a hit with the fans…and most likely with the houseguests as well.

I still don’t know if Julie Chen is the best host for the American Big Brother, but I can’t picture the show without her. Cox will no doubt bring something entirely different to the Canadian version. Here’s hoping it’s something different that works just as well if not better.