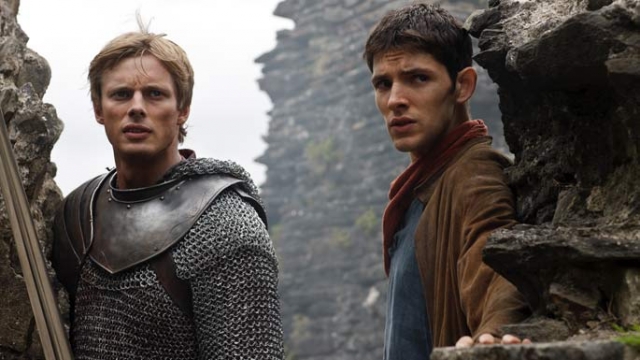 The Other British Boy Wizard

This week marks the beginning of the end for BBC’s Merlin as it enters its fifth and final season. Merlin is a retelling of Arthurian myth. Set in a Camelot where magic is banned, Merlin meets and befriends Prince Arthur. Magical shenanigans ensue.

I have a love/hate relationship with Merlin. The  My TV verdict of the early seasons was positive, and I wholeheartedly agree with that assessment. The show offers a new interpretation of the legendary Arthur/Merlin friendship, with them meeting when they were both young. Season 1 and 2 had a lot of monster of the week episodes, while simultaneously building this friendship after an antagonistic start.

The ‘hate’ part of my love/hate relationship began in Season 3. I should specify- I don’t actually hate Merlin. I wouldn’t watch it if I did.But I’m often disappointed in it; there have been many brilliant moments, and some truly brilliant episodes. So when episodes fall flat, it’s disappointing, because I know the show is capable of greatness. I think the main issue with Merlin is it doesn’t know the story it’s trying to tell. When I first started watching, the writers compared it to Smallville, and so I assumed we were getting the early days of a familiar myth.

Great! We know where the story ends up. Let’s focus on the days before the characters become the characters we know. But halfway through, it seems Merlin decided they wanted to tell the entire Arthurian myth. After three seasons of hinting and nodding at the famous parts of the Arthurian legend, Season 4 happened. It crammed in as much of the Arthurian legend as possible: Arthur became king, married Gwen, the Lancelot incident happened, and Arthur pulled the sword out of the stone.

I had soooo many issues with the way the Lancelot love triangle was handled. Gwen and Lancelot had chemistry in the earlier episodes, but Lancelot backed off when he saw Gwen and Arthur cared about each other. There was no torrid affair. Morgana bewitched them, they kissed, and Arthur was upset. Gwen was temporarily banished and Lancelot committed suicide. Excuse me? One of the most famous love triangles in the world was reduced to one episode, and treated terribly. This love triangle is important. It’s where I like to imagine the phrase ‘bros before hoes’ comes from, that’s how monumental it is. Lancelot’s betrayal of his king and brother-in-arms led to the downfall of Camelot.   The Round Table became divided over the fallout, and Arthur ultimately died. Or sailed away to Avalon. Whatever version of the myth you follow.

The Sword in the Stone was also different, but it worked. Arthur needed to rally the people, so Merlin used some magic to create the iconic moment. The original myth of Arthur being the only one worthy of Excalibur is a great one. But in this interpretation, it was Merlin who deemed Arthur worthy, and he pulled the strings a little. This added a new dimension to the myth. That’s my problem with the Lancelot/Gwen debacle. I’m by no means an Arthurian purist or expert (I’ve watched Merlin with Arthurian purists. It isn’t fun), but if you’re going to change a well-known story, you should add something interesting that makes it worth changing.

Speaking of Gwen…instead of a quest for the Holy Grail, a quest for Gwen’s personality would be more useful. She started out so cool. She was brave, helpful, and wasn’t afraid to speak her mind. She even told Arthur off a few times. She was a servant, he was heir to the throne, so that’s a big deal. Suddenly, in Season 2, she went from kind of liking him as a person to being madly in love with him at the drop of a hat. To be fair to Gwen, maybe she still speaks what’s on her mind. But what’s on her mind seems to be “Arthur is going to be a great king someday”. “Arthur is awesome.” “Other generic words of encouragement.”

Halfway through the series, Gwen was given a brother to worry about. It’s not the same as her having a personality. I’m not saying she can’t care about the men in her life. But a storyline or two when Gwen is focused on her own goals and not just helping out her love interest or brother would not be amiss. Right now, Gwen is basically a perfect wife, there to offer words of encouragement, and it’s boring. You can be a good wife and still have opinions and your own interests. Or Gwen could not be a good wife; I’m not a fan of affairs, but if she actually had one with Lancelot, it could have exposed new facets to Gwen. I don’t care if all it would shows is that she’s a little selfish. Character flaws are good.

While we’re talking about the ladies of the show, Morgana is an even bigger issue than Gwen. She was one of my favorite characters when the show started. Morgana was the ward of King Uther, who despised magic. Unfortunately for Morgana, she’s a witch. You got a sense of her conflicted loyalties, and her fears, and understood why she would eventually turn to the dark side. Or a darker side. My favorite interpretations of Morgana have left her in a moral gray area. Sadly, this Morgana has vacated that fascinating gray space. She was missing for a year, and came back completely evil. A likeable, sympathetic character with understandable internal conflicts was replaced by a cartoonish villain, and we didn’t really get to see that progression.

She doesn’t even have a good reason for being a bad guy. She found out she was actually Uther’s illegitimate  daughter, and was hell bent on getting “her throne”. Um, no, Morgana. I cannot think of any example in history when the king’s illegitimate daughter got the throne over a legitimate son. Morgana wanted what was ‘hers’, so she could restore magic to the land. She got the throne twice, and was a terrible queen both times. She didn’t even do anything to advance her supposed agenda of bringing back magic.  She basically sat there with a crown on her head and tried to kill Arthur. It reinforced my belief that she had no real motivation. She wanted the throne because of reasons, and once she got it, she had no idea what to do with it.

Arthur’s character development has fared better. He went from being an arrogant, spoiled prince, to an honorable king. What is frustrating about Arthur is he still has no idea Merlin has magic. Assuming each season spans roughly a year, and then given the multiple time jumps between seasons, it’s safe to say Merlin and Arthur have known each other for eight or nine years. Their friendship is supposed to be one built on trust. And yet, Arthur still doesn’t know his servant is the most powerful sorcerer in the world, and has been constantly saving his life.

What I want most from this season is for Arthur to find out Merlin’s secret, and early on. Otherwise it’s not believable that they could have a strong, trusting relationship in the future. Not to mention, I am so tired of Arthur being conveniently knocked out whenever Merlin needs to do magic to save the day. It seems to happen at least every other episode. At this point, I’m seriously concerned the Once and Future King could’ve sustained permanent brain damage.

While I wish Merlin would get recognition for all he’s done, Arthur does value his opinion, and they are friends. Their constant banter alone is worth watching the show. Colin Morgan (Merlin), and Bradley James (Arthur) are both very talented actors with amazing chemistry. (For kicks and giggles, watch The Real Merlin and Arthur. Morgan and James go on a road trip trying to find out more about King Arthur. It’s hilarious, and they are delightful). James is especially good at adding layers to Arthur to indicate he subconsciously knows there is more to Merlin than meets the eye. Though actually unveiling Merlin’s secret would add even more to this relationship, Arthur and Merlin’s friendship is strong enough as is, and interesting enough to anchor the show.

In addition to dynamic due at the center of Merlin, the supporting cast is great as well. The Knights of the Round Table all have well defined personalities, and are played a group of charismatic actors. Richard Wilson is reliable as Gaius, Merlin’s mentor. The show also manages to bring in an impressive array of guest stars.

Despite its faults, I enjoy Merlin. It has a gifted cast, beautiful sets and costumes, and some very solid episodes. And despite my gripes, Season 4 was the best yet. It dared to take the oftentimes light-hearted show to a darker place. In the past, there have been a few filler episodes. Every episode in Season 4 was absolutely necessary, and advanced either the overall plot or character development, and oftentimes, both. I’m hoping Season 5 will continue this trend, and be the best yet.

Next week, I’ll review the final season premiere. It’s a two parter, and airs in the US Fridays, on Syfy.