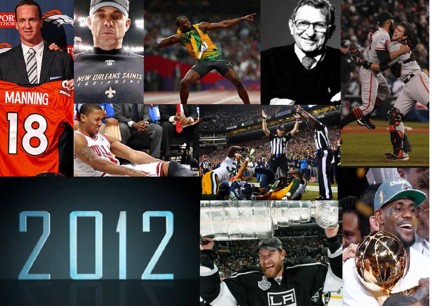 It was a interesting year for sports and while not all moments were those we’d prefer to remember, few can doubt it was a good year to be a sports fan. Well, expect for NHL fans at the moment. That being said, I’m going to break down the year into three categories and review what has been a very captivating year in sports.

The London Olympic Games: I’m not a big follower of the Olympics, but this year I caught myself watching the Games of London a lot more than I usually would this year. One good reason for that were the touching stories of sportsmanship and gracious fans cheering athletes not just for winning but for not giving up and finishing the race even if you’re dead last by a few miles. Those are the moments that will stick with me rather than the people who won gold.

Good year to be Giants fan: If you happened to support a team that was named ‘The Giants’… chances are 2012 was a good year for you. Eli Manning led the New York Giants and defeated the Patriots again to claim his second Superbowl while the San Francisco Giants also won their second title in three seasons in grand style as well.

The Colts go from the basement to the playoffs: This was a gamble. We all knew Luck would do well in the NFL, but that was never a guarantee. The Colts took a chance by letting Peyton Manning go and start fresh with a new quarterback and the move has paid off as the Colts seems to be on their way back to the postseason.

Peyton Goes to Denver: In hindsight, I guess we can see why Manning chose the Broncos over the other teams that were chasing him. Tebow (who isn’t as good as Manning) made the playoffs with this team so upgrading at QB could only make them better. Now division winners, they will be a tough team to eliminate in the post-season. Would be sweet to see the Broncos and the Colts face off in the playoffs… I know I’d watch that game.

Worst NBA Finals, ever: After a short lockout, the NBA presented a final that couldn’t have been worse following a labour dispute. Watching the two most hated teams in the NBA face off in the finals meant one thing: one of them had to win it. The team that deserted a city after lying to them (Oklahoma) and the team that bought their way into the post-season (Miami) squared off in a battle of the evil empires. I didn’t watch a single game, as these two teams represent the ugly truth plaguing basketball: a lack of loyalty to the fans and the cities. I couldn’t have cared less who won and still don’t now. So what if LeBron finally won a title, it was only a matter of time considering he jumped into a stacked line up. If Albert Pujols had signed with the Yankees and won the series, that wouldn’t be a shocker as well. It just reminded me why I don’t like watching pro-basketball anymore.

Jets trade for Tebow, refuse to use him: Let me see if I get this straight. You trade for a new back up QB who led a team to the playoffs and faired pretty well the previous season. You tell the guy right from the start that he’s only the backup and that Sanchez is their #1 guy. After your first string fails to win anything and ruins your season and any hope of making the playoffs, you skip the backup who’s been patiently waiting and give the suicide #3 QB the start instead. What’s the point of trading for a good backup if you’re never going to give him a chance to prove himself? It’s no wonder Tebow wants out of NY, that team is horribly mismanaged and deserves to dwell in dead last.

Marlins have another fire sale: To be perfectly honest, I saw this coming a mile away. When the Marlins failed to sign Albert Pujols and CJ Wilson, word came out that money wasn’t an issue. The only thing that caused these talks to collapse was a request for a no-trade clause. When I heard that, I turned to a friend of mine and said, “Miami has no intention of keeping any of these players, they’ll compete for a few years and then hold another firesale.” Turns out that fire sale occurred right after the team finished dead last in the NL East. Less than two months after the Giants won the series, almost all of the Marlin’s high priced talent has been shipped out and replaced with some amazing prospects, but none that will flourish for another two or three years. Based on the talent they have, I can see them competing in two or three seasons but the odds of them ever signing a big free agent without a no-trade clause now? Hell has a better chance of getting a hockey franchise. One fanbase’s sorrows is another fanbase’s joy, just ask a Blue Jays fan.

The Saints get suspended: While most of the player suspensions have been overturned, the NFL has still managed to make the point loud and clear with their sanctions against the team and the coaching staff. If you do a bounty system and promote injuring players, you will be fined and suspended harshly by the league. I happen to think the NFL was right to make an example of the Saints, they way they did it however was a little flawed. The point of the game is to win, not hurt people. I hope the rest of the league learns from the Saints punishment which was pretty darn harsh despite the players getting theirs overturned.

Lance Armstrong: Stripped of all seven “Tour de France” titles for doping, this is by far the worst doping scandal in the history of sports. Now newspapers that he sued for libel for saying he was doping are countersuing to recover their money since it now appears these stories were in fact correct to begin with. Cycling needs to catch up with the times and get ten times tougher on doping or fade out of the spotlight for good.

Penn State Scandal: The NCAA came down hard on Penn State and for good reason. They covered up not only something that was inhumane, but criminal as well. Putting football ahead of the welfare of your students or children for that matter was more than enough to warrant the brutal sanctions that Penn State got, being suspended from bowl games for the next half a decade and then some. Personally if the NCAA had used the nuclear option, they would have been fully justified to do so. By wiping Joe Paterno’s numbers from the record book, the message was loud and clear to the rest of the nation: put your ego ahead of the welfare of your students and your legacy is the first thing that will be taken away.

Red Sox continued to struggle: Red Sox fans were worried when the team literally bombed in the final month of the 2011 season. They had no idea that slump would carry on into the 2012 season and result in a dead last finish in the AL East with only 69 wins and almost a hundred losses. Hiring Bobby Valentine was a terrible mistake which lead to a player revolt and the owners having to make some very tough decisions, and that trade with the Dodgers was very irresponsible. They gave a lot of good prospects to get Adrian Gonzales and they turned around and gave him up for next to nothing. They’ve made a few signings and signed a new Manager in Jon Farrell. On paper, the Sox are still the worst in the division, so Beantown is going to have another rough year in 2013.

NFL Replacement Referees: Blown calls are a part of the game, but when you see missed call after missed call to the mother of all fuck ups during the Seattle vs. Green Bay game… the NFL had no choice but to end the referee lockout asap. I have no doubt that one call will be remembered and considered by many as one of the worst calls in the history of American football.