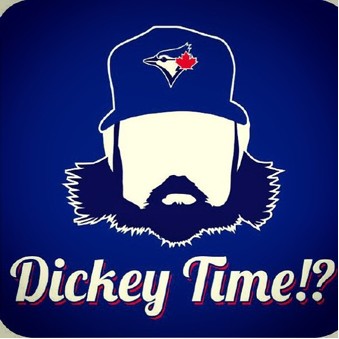 There was a portion of R.A. Dickey’s book that that I found very amusing. In ‘Wherever I wind up’, Dickey describes a situation where he’s taking a sub to the stadium in Washington to start against the Nationals for the Mets. On the subway moving towards the stadium were countless Nationals fans, unaware they were riding with the guy who was going to take on their team later that day. Dickey describes how he sat there pretending to read a book while listening to the fans talk about him and what they expected to see. One comment he thought was fun was that the paper referred to him as ‘the baffler’ because of the pitch he uses to baffle hitters into striking out, the most underrated pitch in all of baseball.

For the better part of the last three years, Robert Allen (R.A.) Dickey has been baffling batters in baseball with his knuckleball, a pitch that took a great deal of time and even more patience to develop. Now Dickey’s quest for truth, authenticity and the perfect knuckleball has led him to Toronto. The centerpiece of a six player deal with the New York Mets, R.A. Dickey is one of many new Blue Jays that will be playing at the Roger’s Centre this season, the very same team that is now the odds on favourite in Las Vegas to win the World Series this year. While reading Dickey’s memoir over the course of the last week, I not only discovered what a extraordinary ballplayer Dickey is, but also what an remarkable person he is as well. He’s very humble and thankful for the chances he’s had to play his sport and has learned from his many years in the minors to appreciate his place in professional baseball, something he never takes for granted. He’s also very thankful of the pitch that allowed him to return from baseball limbo with much help from the men he refers to as the “Knuckleball Jedi Council”, which consists of fellow knuckleballers Charlie Hough, Phil Nerko and Tim Wakefield. He’s also very grateful for how things have turned out and it’s evident in his book as he thanks his wife, friends and family and most of all his God for the blessings in his life.

Dickey also came clean in his memoir about a lot of things by not only talking about his career as a baseball journeyman but the challenges he had to endure as a child growing up in Tennessee. In the book Dickey is open about the sexual abuse he suffered as a child as Dickey was molested by a female babysitter on several occasions throughout a single summer. His ability to step forward and disclose what happened to him as a child provides a positive example to other survivors that it’s okay to disclose what happened and to seek help. There is hope and things can get better with time and support. Dickey is also known for his charitable nature as well. He is the 2012 recipient of the ‘Branch Rickey Award’ which is given out to individuals in baseball who contribute to their communities and are strong role models. Dickey was recognized for his work distributing baseball equipment and supplies to countries in Central and South America. It was also revealed that Dickey has already donated 1% of his new contract to the Blue Jays foundation, the maximum that is allowed by the rules of Major League Baseball.

When speaking to the press in Toronto a few weeks ago with Blue Jays General Manager Alex Anthopolus, R.A. Dickey took a lot of questions and gave a lot of answers that impressed a lot of fans watching and eager to see the new ace of our starting rotation. It’s not an assumption that I take lightly, as Dickey is the reigning Cy Young winner of the National League, posting an impressive line of 20-6 when playing for what was a very lacklustre Mets in 2012. With the additions of Josh Johnson and Mark Buehrle from the Marlins along with Brandon Morrow and Ricky Romero… the Jays have one of the best rotations in all of baseball. This year’s Blue Jays has a good chance to get a playoff berth for the blue jays, which would be the team’s first since winning back to back championships in the early nineties. It’s this vision of the future that allowed Anthopolus to lure Dickey to signing a two year extension with the Jays, which in turn finalized the trade to bring him to Toronto.

During that press conference in Toronto, you could tell that R.A. Dickey was pleased to be a member of the Toronto Blue Jays. When reading his book, Dickey stated on many occasions that it frustrated him that throughout his baseball journey he had to fight for a spot and prove that he was worthy enough to be a part of the team. He seldom had the feeling that he was wanted and pursued by others to join them. This time around, Dickey was pursued by the Blue Jays. By making this trade with the Mets, the Blue Jays surrendered two of their top prospects to land the Cy Young winner, and Anthopolus himself flew out to Nashville to personally negotiate an extension, which was necessary to finalize the trade. The Blue Jays new manager John Gibbons also travelled to Nashville to partake in the face to face negotiations, a gesture that I am sure was not lost on Mr. Dickey. A team was finally stepping up and making the pitch this time, something that I am sure was a welcome change for R.A. Dickey.

In his book, Dickey also had high praise for Jose Reyes, another player that Toronto acquired in their colossal trade with the Marlins. I was hoping someone was going to ask Dickey about being reunited with Reyes this year but based on what I read in his memoir, I’m sure he will be delighted to have his favourite short stop behind him this coming season. Toronto actually has a lot of great defensive players that will make life a little easier for the knuckleball pitcher and the fact that he will play most of his home games in a domed stadium will also work for Dickey who also admitted in his book that the knuckle ball works very well in domes. Something I personally witnessed myself a few years back when I watched Tim Wakefield shutout the Blue Jays when the dome was closed. I look forward to seeing a knuckleball tossed in the Rogers Centre again this coming season and am much happier that I’ll be able to root for the person tossing it this time.

When it’s all said and done, what impressed Canadians most when listening to R.A. Dickey address the media was his modesty and how grateful he was to be a part of our team. To hear someone be so cheerful and appreciative to come north of the border was inspiring to hear for Canadians. What we also miss a great deal about sports when growing up was the humility that used to be shown by a lot of athletes, especially in Canada. To see Mr. Dickey display that kind of humility when speaking to the press in Toronto was very refreshing. Let’s hope this rubs off.