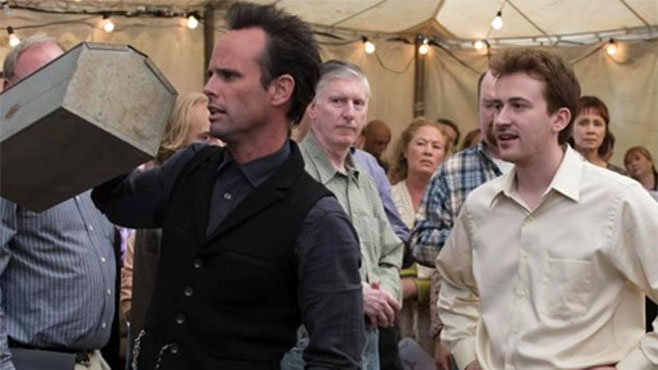 The title, “Truth and Consequences,” of this weeks Justified is an apt summary of the episode. Truths are revealed; consequences are felt.

First: Raylan learns the truth about Lindsey. Now that Winona has left Raylan for Kevin Bacon, and the writers are, mercifully, not trying to spice up Raylan’s life with any kind of inner-turmoil, Raylan’s personal life is shaken up by his eternal weakness for a beautiful woman. Despite outright stating the nature of her con to Raylan, we end the episode with the consequences: Raylan has lost his secret stash.

Second: Boyd faces the truth about preacher Billy and his sister, Cassie. In the previous episode, Boyd figures out the dynamic that runs Billy’s revival: Billy is a true believer while his sister runs the business. In this episode, Boyd learns the depth of this fact – Cassie milks the poison from the snakes that underpin Billy’s Pentecostal preaching.

Walton Goggins is, as always, fantastic as the consequences play out. He easily portrays Boyd’s compassion for Billy, having once stood in his place. Boyd’s regret is palpable but subtle when Billy dies from being bitten from a genuinely poisonous snake. Despite Billy’s death, we can be sure that Cassie is not so easily gotten rid off, as an earlier scene shows she does not fear Boyd and will not be easily intimidated by him.

Third: more revelations in the season-long case I’m enjoying calling “Drew Thompson and the Marshall Stiffy.” This week, we learn that Drew Thompson faked his own death to go into hiding after (witnessing series-long background villain and mafia boss) Theo Tonin murder a government informant.

This decade old truth appears to be essential in this season’s case, and this episode starts to give shape to the mystery that will structure the season. A subplot of the episode, a blackmailed FBI agent, ends with the agent telling Raylan that he (Raylan) “doesn’t know these people.” It’s a sentiment familiar to Justified, and only in “Truth and Consequences” do we start to get a sense of who this season’s new “these people” are going to be. For now, in this episode, we see that at least two people, the FBI agent and Drew Thompson, chose death (or a faked-death) as a consequence of knowing too much about this new branch of Theo Tonin’s mafia.

It is not, ultimately, a particularly memorable episode of Justified. It feels, instead, like a necessary but unexciting chess play, with everyone getting into his or her starting positions. This season Raylan and Boyd have little to do with one another, and so, in their separate camps: Raylan has now learned who his new enemies are, and Boyd has begun to take down the obstacles in the way of his criminal empire.