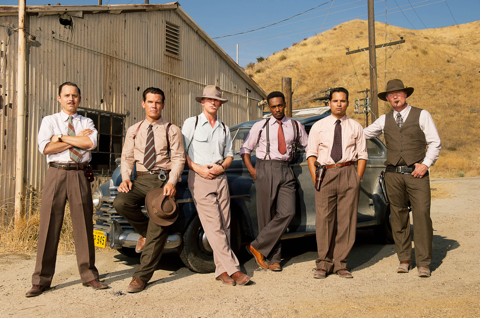 I’ve read a lot of reviews that describe Gangster Squad as all style, no substance. I think that’s being too kind. The style of gangster squad isn’t up to par either.  The costuming is a feat of nature, the make up spot on, and the set dressing is some of the most gorgeous I’ve ever seen, but the digital finish (especially on the action scenes) makes the  movie occasionally look like a particularly well-budgeted time travel episode of a sci-fi procedural. And the movie completely fails to satisfyingly hit the gangster-movie beats it so clearly wants to ape. Even as an empty, pretty gangster movie, it fails.

And boy is it empty. It tells the story of a group of rogue cops who take down Mickey Cohen (jewish, angry gangster taking over LA). Leading the “Gangster Squad” is James Brolin, in a by-the-numbers performance as a man who really wants to get Cohen and doesn’t care what he has to do to achieve that. Actually, that makes it sound like Brolin has a character arc, which he doesn’t. He starts the movie a “punch first, ask questions later” cop who uses bullets the way riot police use tear gas, and that attitude is vindicated throughout the movie. The script pays lip service to the idea that all this violence makes the cops as bad as the gangsters, but it doesn’t play out that way. Brute force, illegal arrests, and flat out murder are an unquestionable good in this movie.

Not that it gives us much of an alternative. Sean Penn’s Mickey Cohen is so unambiguously evil, lacking any pathology beyond naked greed, that it’s comical at times. Sean Penn is a talented actor, and he imbues Mickey with a great physicality that speaks to his boxer past and his short-tempered nature. All this great acting, however, only highlights just how empty the character.

The supporting cast is completely wasted. Ryan Gosling might as well be playing a Ryan Gosling parody. Emma Stone is handed a role so underwritten that it falls entirely on her super-expressive eyes to fill in the gaps. The film hinges on a relationship between the two that is mostly built up by leftover goodwill from Crazy, Stupid, Love. They’re both attractive and charismatic, and they have a genuine chemistry, but there’s nothing in the movie that justifies their importance to one another.

The biggest bummer of Gangster Squad is just thinking about how fun this movie could have been. It’s a great idea – getting a bunch of awesome actors together to play dress up in a classic-style gangster film. And I really have nothing against movies that are just fun stylish exercises – I loved Sky Captain and the World of Tomorrow, Down with Love, and Sin City. But the emptiness at the core of Gangster Squad pervades every frame, wasting its cast, premise, and potential.