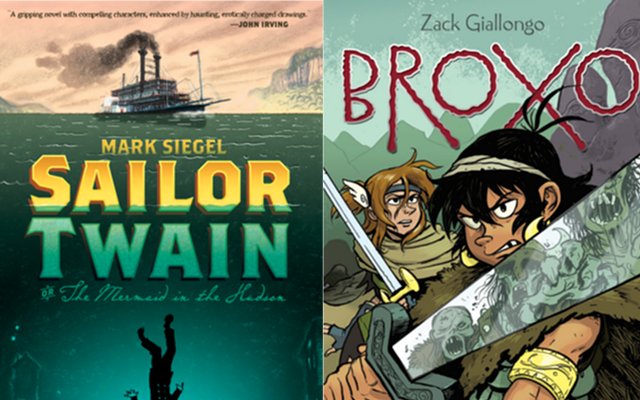 You may well have guessed that I like graphic novels/graphic story-telling in general (there may have been a few hints: comic con, for example). You’re right! A+ for you! I could give you a whole little essay about why—it would be kind of long though, and have lots to do with visual literacy, language as symbols/images, implied plots and all that jazz—suffice it to say that I really like graphic novels. Unfortunately, this does not necessarily mean that I get to read as many graphic novels as I’d like (I don’t really get to read that many, is what I’m saying). But two of the ones I read this year were great and I felt the need to notify you of their greatness.

Sailor Twain, by Mark Siegel
This one had “Borah” written all over it. First of all, it’s about the Captain (he’s named Twain, but he’s not Mark Twain—but there is a “those looking for a plot will be shot reference”) of a steamboat on the Hudson who encounters a mermaid. Things get messy. And admittedly, it caters to my interests (sailors! Mermaids! secretly-lady writers! Etc), but it is really great. The art is a whimsical mix of smudgy, charcoal-esque backgrounds and boldly cartoonish characters with exaggerated features, but pitch-perfect expressions. And do not be fooled, gentle reader—this graphic novel is not so much a glorified/collected comic book as it is both graphic, and a legitimate novel. Tension, intrigue, magic, and deft character work abound.

Broxo, by Zach Gaillongo
Broxo was less specific to my taste, but it still definitely leans in my direction. It’s a young reader/teen graphic novel about two barbarian-style teen royal warriors (one of these being the titular Broxo) battling a zombie army. Yes. It’s awesome. It’s funny, clever, and gorgeous to look at. Broxo is also an easy read—and look, yes, I know I’m quite vocal about how much I love Faulkner, but that does not mean that I want every reading experience to be a herculean effort, but sometimes easy is just fun. And in this case, by easy, I mean, we don’t have to think about the mechanics of the narrative—we have the pleasure of discovering it through the eyes of Zora (rhymes with yours truly), a funny, sometimes-biting, warrior-princess from beyond the mountains—and as much a stranger to Broxo’s land and zombie problems as we are. Read Broxo—it’s a good time.