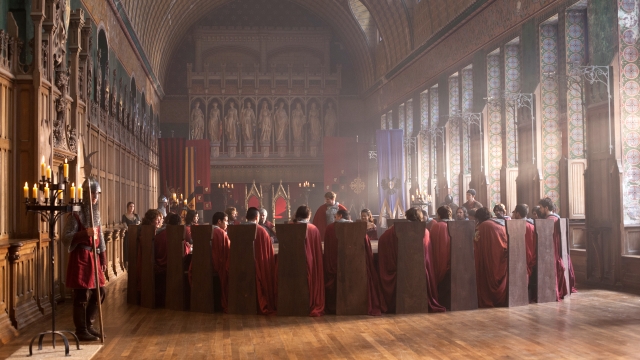 If Merlin’s season 5 two-part premiere is any indication, it’s going to be a very frustrating final season indeed.

The majority of my problems with this episode lie with the main villain- Morgana. The episodes centered around her desperately trying to find the Diamair- a key to all knowledge that will tell her what Arthur’s Bane and how to defeat him. Her goal, as ever, is to get Camelot. She already got Camelot. Twice. And lost it both times due to ineptitude. There comes a time in one’s life when one must reevaluate their dreams.

Something that baffled me was: who are these people Morgana is ordering around? Where does she keep finding armies of people to do her dirty work for her, when their predecessors always die? It might make more sense if she were a charismatic leader, but even Mordred, who idolized her after she saved him when he was a child, turned against her because he saw what a psychopathic rage-monster this girl is. There were a few attempts at making her sympathetic- she has a pet dragon she’s nice to. There was a brief flashback of Morgana and her dragon locked up in a well, but that wasn’t explored at all. Any likability this might have raised was quashed by Morgana being a sadistic, screaming psychopath. It feels like we’re retreading familiar ground, and in the final season it would be nice if the Big Bad were a formidable villain, not a toddler throwing a temper tantrum.

That formidable villain will surprisingly not be Mordred, the person destined to kill Arthur, who returned to the show, after being absent since Season 2. In the first two seasons, he was played by the talented child actor, Asa Butterfield (the titular character in 2011’s Hugo). But, given the time jumps forward, the show hired a new actor to play the now grown up Mordred. I’m always wary when characters are recast, but Alexander Vlahos was wonderfully enigmatic and sympathetic in his role. Even knowing Mordred’s fate, I couldn’t help but like him, and I’m looking forward to his stint as a series regular. Mordred fell firmly on Team Camelot by the end of the second episode; I hope his inevitable descent to the dark side will make sense and be a well-developed arc.

The lack of progression in Merlin/Arthur’s relationship was disappointing. There were plenty of good moments with the two of them looking out for each other, and doing their usual banter. But Arthur still doesn’t know Merlin is a wizard. You can’t have a legendary friendship if one person keeps a secret from the other for nearly a decade. Since it didn’t happen in the premiere, I’m afraid the writers are going to have the big reveal happen in the season finale, which will deprive a potentially great storyline the time it deserves.

The Knights of the Round Table were featured a lot, which is always good. If the show is afraid to tread new water with its core cast, at least can bring in the entertaining supporting players. Somewhere between the excessive gratuitous shirtless shots, the knights showed they were still capable and interesting characters. I’m serious about the excessiveness though- there was literally a cave of shirtless, sweaty knights, forced to dig around and look for the Diamair for Morgana. I’m just saying, some subtlety would have been okay there.

The Diamair turned out to be an alien thing. It looked like something you might see in Doctor Who, not a magical creature from Merlin. While the Diamair’s bizarre appearance was distracting, the message it shared with Merlin was interesting: Arthur’s Bane is Arthur himself. Arthur being his own undoing is actually an idea I’m excited to see explored this season. If it were any exterior force, Merlin would be able to protect Arthur. But Merlin has struggled against Arthur’s stubbornness since day one, and protecting Arthur from himself might be the one task Merlin won’t be able to do.

The fifth season feels bigger than before. There were some beautiful new landscapes. The wintery north was breathtaking. And there was a fight sequence on a gray, hazy hillside that was just awesome. The choreography was great, but the utilization of the scenery- the way the enemy emerged from the fog – was brilliant, and made it possibly my favorite fight sequence of the show yet. Add on top of that two veteran actors as guest stars- Lindsay Duncan and Liam Cunningham- and it was a decent start of the season.

My hope for this season is the show doesn’t rely on guest stars, exciting scenery and shirtless men to distract from the lack of significant character development. Some interesting seeds have been planted, and I’m keeping my fingers crossed that the season will follow through.