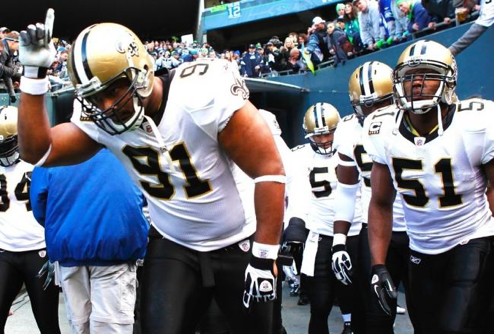 The Suspensions Go Marching Out

The last time Roger Goddell’s suspensions against the players of the New Orleans Saints involved in the bounty scandal were reversed, he ignored what was told to him. He re-suspended the same players and refused to compromise on what he felt was a gross violation of the game. I’m not saying that Goddell has no right to be pissed off, I would be too if I learned that players were conspiring to injure people. The point of the sport is to win games, not hurt people. But this week when neutral arbitrator Paul Tagliabue ruled against Commissioner Goddell and reversed his suspensions for a second time, this wasn’t a win for the players… it was a win for due process.

When it comes to providing evidence to what the NFL knows and how they came to know it, the Commissioner and the League have hardly been forthcoming. Right now the only thing we have to go on is statements made by coaches who have also been suspended. This is not evidence, it’s hearsay. It’s testimony that could be coerced from coaches who might be playing ball with the league to get a better sentence themselves when suspensions are handed out. When it comes to guilt of the players, there is next to no actual hard evidence to prove that any of the mentioned players were involved in any kind of bounty system. Everything is completely circumstantial. That is not enough to warrant the suspensions that Roger Goddell has been tossing around. From what I have gathered from reading everything I could get my hands no, the NFL has not presented a single e-mail or any other kind of hard evidence correspondence that would prove the guilt of any of the players that the NFL has tried to suspend. Knowing what happened and being able to prove it are two different things and that is why the player suspensions are being reversed.

What it boils down to is this being a case of, “It’s not what you know, it’s what you can prove.” While these guys may look guilty, it’s just a shame that the NLF and Goddell couldn’t prove it. Suspicion is not enough to warrant a suspension. You need evidence. If you don’t have it, you can’t suspend someone because you think they were involved.  This lack of actual evidence is likely the reason why Tagliabue reversed all of Goddell’s suspensions and ruled in favor of the players. As much as the idea of the bounty’s the Saints are accused of doing sickens me, I happen to agree with the decision that was made by the arbitrator.

When it comes to other teams even considering bounty systems in the not so distant future, I don’t think Roger Goddell has anything to worry about. No coaching staff is ever going to allow that kind of conduct to ever go on in any locker rooms in the NFL. No coach is going to put their job, reputation and livelihood on the line for anyone and the example has been made. These sanctions that were levied on the coaches and the organization should be enough to convince the teams that this is a risk that just isn’t worth taking.

One thing that I think and hope all NFL fans will agree on: it’s over. The Saints bountygate scandal is over. Let’s move on and just watch some football. I think the lesson has been learned on all sides, and let’s hope that the league, players and coaches will all use this lesson to make sure something like this never happens again. I think based on what’s happened, that mission is accomplished as I don’t think there’s a single team that would want to risk the sanctions that the Saints got earlier this year.

The lesson is learned so let’s move on.