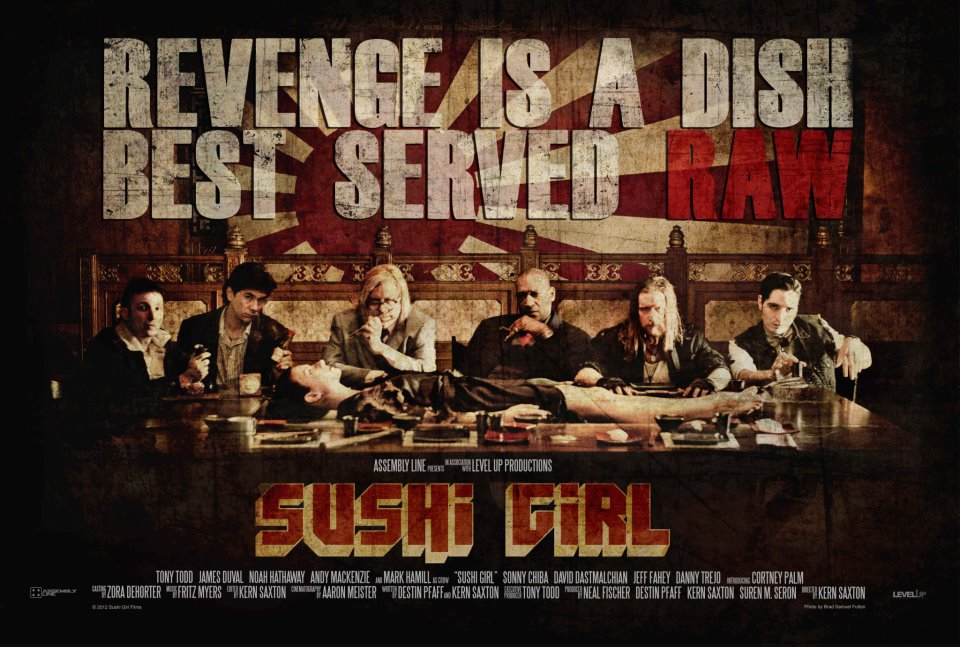 Dig, if you will, a picture of a mincing Mark Hamill, looking like Philip Seymour Hoffman in Boogie Nights, hammering chopsticks into someone’s leg.  Hold that image in your mind and continue reading when you’re ready.

Now let’s sit down and talk a little about Sushi Girl, a Dark Crime…Drama?  Comedy?  Thriller?  It’s hard to say really.  Watching it, I mostly get the impression that writer/director Kern Saxton has watched a lot of Quinton Tarantino and just a little bit of Mel Gibson.  Neither of which are necessarily a bad thing.  Necessarily.  In the film, we are presented with a story about a heist gone wrong and how the surviving band of criminals and cut throats come together to determine just what happened and perhaps enact a little revenge.

As far as casts go, it’s a combination of delight and surprise as we get to see the aforementioned Mr. Hamill nee Skywalker as the simpering Crow along with Tony Todd who skillfully plays the Machiavellian Japanophile, Duke who has brought everyone together for this special meeting and is the workhorse of this film not so much chewing scenery as rolling it in his teeth like a toothpick or cigar.  Danny Trejo and Sonny Chiba both make delightful and short cameos to lend this film its gritty bona fides.  The rest of the ensemble are about what you’d expect from a gritty cable cop show, not drawing too much attention to themselves but not exactly wowing.  Joining Crow and Duke as the central characters are Max the hirsute biker thug (Andy Mackenzie), Francis the coked out stool-pigeon (James Duval), and Fish the bagman who just got out of prison (Noah Hathaway).  Worth mentioning is Cortney Palm who plays a central if largely silent role.

The majority of the piece takes place in one room made up to look like a seedy Yakuza den where the five ne’er-do-wells congregate at Duke’s insistence around the prone body of the titular Sushi Girl who is covered in a fine layer of raw fish and acting as something of a centerfold as centerpiece.  Throughout the film, her reactions or lack thereof act as a counterpoint to the machinations of the assembled villains.  As things unfold, we learn that all five men were involved in a diamond heist gone wrong and are all full of recrimination and suspicion over just how.

It is in the middle portion of this film that it descends into what can only be distressingly described as Torture Porn and we are graced with that image I mentioned at the start.  We are made to watch people be beaten, stabbed, amputated, scourged in a scene lovingly copied from the Passion, and given amateur dentistry for reasons which can at most generous be described as gratuitous.  Throughout it, we are given some relief in frequent flashbacks to the fateful day which have some of the more entertaining moments and a machete-wielding Mr. Trejo.  These all promise some revelation just waiting to bring about a satisfactory conclusion but in the end, that’s not quite what we get.

What we do get is a confusing Mexican standoff mingled with various twists and turns that fail to really excite.  By the time the credits rolled, I was nodding my head, seeing how it all fit together and feeling marginally entertained but not particularly overwhelmed.  This is a movie that might do better with a bunch of friends sitting around with drinks and snacks, talking over some of the more drawn out periods and groaning in unison over the scenes of hyper-violence.  While it is amusing to See Mr. Hamill dropping F-bombs and camping it up, his acting seems more at home in a Neil Simon stageplay than a gritty crime movie and while Tony Todd is menacing and charming, he needed more support from his other players and the script to really carry this thing and neither was very forthcoming.

All in all, a fun and diverting film that might be worth a late night viewing but nothing to put oneself out to go see.