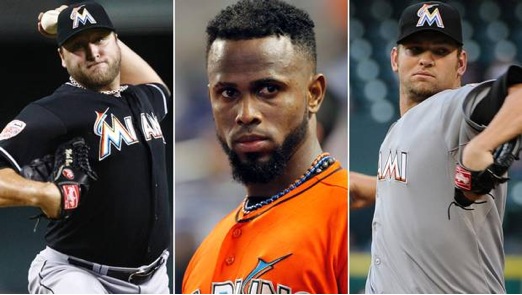 Blue Jays-Marlins: What a Difference a Day Makes

So just how big is this trade the Blue Jays made with the Marlins yesterday?

Here’s your answer: if you made a bet in Las Vegas that the Toronto Blue Jays would win the 2013 World Series on Tuesday morning, your odds would have been 100-1. If you tried to make the same bet on the Blue Jays today, the odds in Vegas are now 15-1.

What a difference a day makes.

Only a few days ago, I was making accusations that Rogers Communications was being cheap and not making an effort to compete. Tonight I will be dining on crow as Alex Anthopoulos was making this deal while I wrote that article. What makes this deal even sweeter is that the Boston Red Sox tried really hard at last week’s winter meetings to pry a few of these players away from Miami for themselves. So not only did the Jays make themselves stronger with this amazing trade, but they cock-blocked a division rival at the same time.

Just the fact that Anthopoulos managed to pull off a trade this huge without giving up players who are named D’Arnaud, Gose or Arencibia makes this a huge win for the Blue Jays. It also shows you how deep their farm system really is, as this was a mere hiccup for the Blue Jays to pull off.

So before we continue, let’s recap the big trade:

If you’re a fan of the Blue Jays, you have to be happy about this. The Blue Jays, and owner Rogers Communications, have finally made a big splash and a symbolic gesture that they are truly ready to contend. If the Blue Jays really want to win this trade, signing Josh Johnson to a long term contract has to be a priority for Anthopoulos, that and getting a new manager.

Speaking of managers, can someone in the media get a comment from John Farrell? I’m very curious to see how our former manager feels about how badass our roster looks now. Our team now sports one of the best rotations in the AL East, if not all of baseball in the form of Johnson, Buehrle, Morrow, Romero and Happ. I don’t know about you, but I think the other teams in the AL East should be a little nervous about that rotation. The addition of two big arms will also ease the pressure on both Morrow and Romero, who will hopefully be able to make a comeback in 2013.

It’s obvious this trade is made to make a run today rather than keep waiting for our young plants to grow into something that ‘might’ work out. The Blue Jays needed to make a big move to appease their fans and this just might do the trick. I’m already pumped about the idea of seeing Jose Reyes hit leadoff for the Jays with Lawrie, Bautista and Encarnacion all hitting behind him. He might very well be the best leadoff hitter we’ve had since Ricky Henderson.

And for the first time in Blue Jays history, our payroll is over the hundred million dollar mark. After arbitrations are all figured out, the Jays will have a hefty payroll over the one hundred and twenty million dollar mark. The days of calling the Blue Jays cheap have finally been brought to an end. Rogers Communications have opened the wallet, and now there is a very good chance Jays fans will do the same and attendance could and likely will be a lot higher next year.

Now I have a sincere message for the fans of the Miami Marlins: while I’m sure this makes the Marlins look very bad, I happen to disagree. I agree that Miami Marlin fans have every right to be pissed, but I have to tell them this trade could work out for them as well. I remember when Pat Gillick traded away two of my favourite Blue Jays for two guys I had never heard of. Who the hell is Roberto Alomar? Joe Carter? I was as upset as Marlin fans are right now, but I really believe that in a season or two they will really start to like this trade. When Roberto made that first stunning play at second base, I started to see what Gilick saw in this player and over time I was convinced that we had ripped off the Padres big time. The two world championship banners that hang in our Dome is evidence that we did.

There was a Roberto Alomar in this trade, and he was sent to the Marlins. Adeiny Hechavarria is going to be an all-star, no doubt about it. There’s a reason why the Blue Jays and the Yankees went into a bidding war over this kid’s talents and in few years you will reap the rewards of this trade when he wins a few gold gloves and starts to mash NL pitching like it’s going out of style. This is why Miami chose to do business with the Blue Jays instead of the Red Sox or any other team for that matter. Anthopoulos really blew the Marlins away with his offer and if I was the GM of the Marlins I would have taken this offer in a heartbeat. You’re giving up short term success (which was never guaranteed) for long term gain. This is a win for the Marlins too.

Let’s look at this realistically: there was no way Josh Johnson was coming back to the Marlins next year. With the team already struggling, paying Reyes and Buehrle a ton to lose didn’t make much sense either. This was a good move for the Marlins, to quickly hit the reset button and gain some amazing young talent in the process. If they turn around and use some of that money to pick up a pitcher or another player that will complement the players they just got from Toronto, this is going to be a fun team to watch.

Remember, Miami’s new manager is Mike Redmond. Does anyone remember where he worked before the Marlins picked him up? That’s right, in the Blue Jay minor league system. I’m pretty sure the GM of the Marlins had a nice conversation with Redmond about which prospects to pluck from Toronto’s cupboards when negotiating any deal with Anthopoulos. I happen to think Redmond is doing backflips over having Hechavarria in his lineup. Alvarez is also a fly ball pitcher who was destroyed in the homer-friendly Rogers Centre. In the more pitcher-friendly ballpark in Miami, Henderson is going to post some great numbers for the Marlins and fare better in the NL East. A lot of the minor league players coming over are all familiar with Redmond which means their transition to the Marlin organization will be a lot smoother than one would expect with any other team. Just like the Beckett trade that saw Hanley Ramirez to the Fish, this trade will benefit you as well. It will just require a little patience.

There is a loser in this trade, but contrary to popular opinion it’s not the Miami Marlins. If I was a fan of the Red Sox, Rays, Orioles and Yankees I’d be very worried right now. If this team stays healthy, they could easily win 90-100 games. This is going to push someone out of the playoff picture, and it could literally be any of the teams mentioned above. After failing to land Reyes and Johnson from the Marlins, the Red Sox had better get used to their view in the basement of the AL East because I don’t see that view changing anytime soon. The Blue Jays have made a push to contend and even if they don’t make the playoffs (which is never guaranteed) I look forward to watching the Blue Jays fight for a playoff spot in September, something many fans haven’t seen for a long, long time.

So, mere days after calling Rogers too cheap to spend on the Jays and thinking that Alex was incapable of landing some big players, I will be dining on Crow and greens for dinner tonight. I stand corrected but never have I been so happy to be wrong. I eagerly look forward to watch some exciting baseball in 2013. Spring training can’t come soon enough!