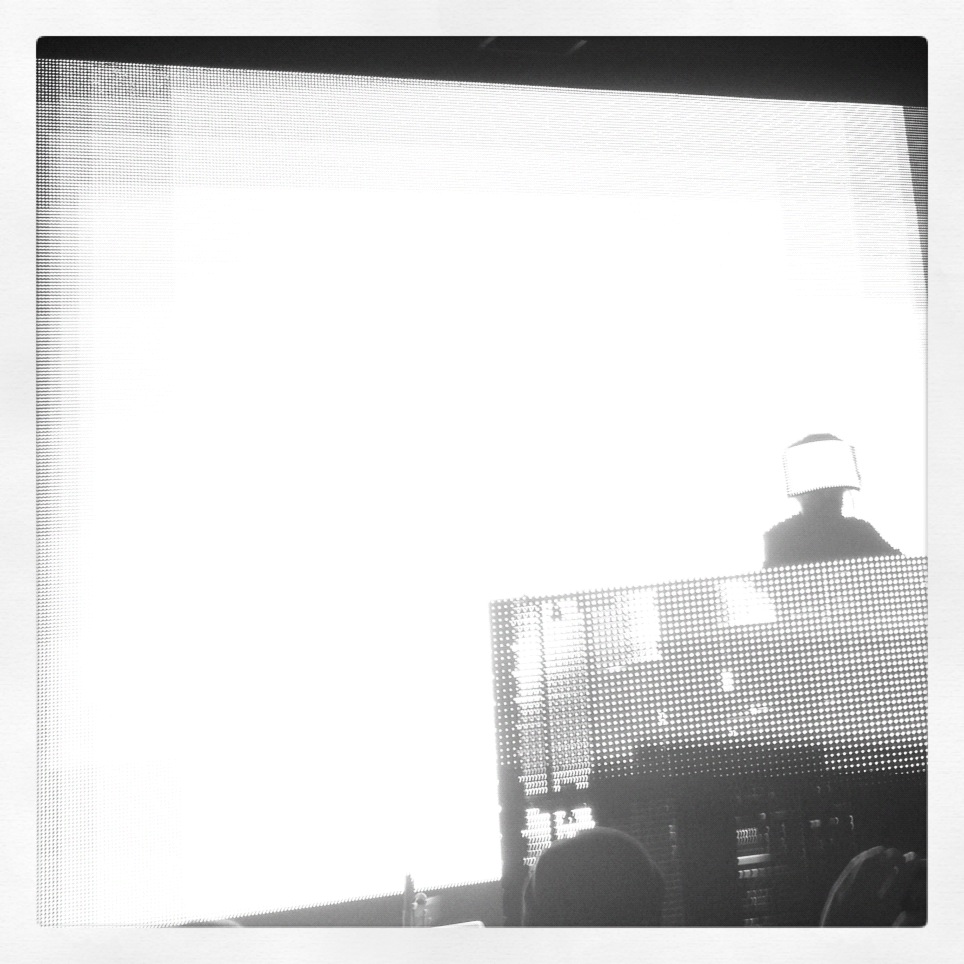 Staying relevant is difficult for modern musicians.  Ubiquitous online scrutiny coupled with the limitless ability to release and re-release material has created a musical landscape where rapid change is not only expected, it is demanded; this is particularly true of electronic acts.  Genres and sub-genres emerge, embellish and collapse in upon themselves in unbelievably brief spans of time (looking at you, Dubstep).  This notion was at the forefront of my mind as I prepared myself for last Friday’s sonic onslaught at the hands of a pair of British electronic pioneers.

Tom Jenkinson AKA Squarepusher hardly needs any introduction.  Since the mid-90s, this virtuoso bassist-cum-producer has been dazzling jazz purists and D&B headbangers alike with his infectious blend of furious low-end textures and 8-bit melodies.  Equal parts tongue-in-cheek and fearsomely visceral – and peer to such totemic names as Aphex Twin and the inimitable Amon Tobin – Jenkinson’s fifteen full-length releases on Warp represent a famously dense, if eclectic, oeuvre.  Sharing the label’s mantle – and the stage tonight – are relative newcomers Mount Kimbie.

Two years ago the Peckham duo of Kai Campos and Dom Maker released Crooks and Lovers to great acclaim under the name Mount Kimbie.  Mount Kimbie gained attention for their atypical time signatures, their esoteric sampling and their use of live instrumentation at a time when The Laptop reigned supreme.  The resulting work was one of paradox, at once organic and heavily processed, dreamlike, urgent.

Two years later in Toronto, their live sound is somewhat more confined to rhythmic standards, and the crowd bobs along hypnotically.  A brief conversation with Kai after the show confirms my suspicions – he ruefully smiles when I comment on the more accessible nature of the sound tonight, and admits that the duo needed to give the masses something they could dance to.  Attempting to reproduce exactly the sounds of Crooks and Lovers onstage tended to result in mass confusion, and tonight’s set decisively steered away from this tendency.  Dom nevertheless tethered the sound to the realm of the physical with a relentless beat on his crash cymbal.  Mount Kimbie’s second album is in production with a release date yet to be set, and tonight’s performance hints at a bright future for the duo.

Jenkinson’s arrival on stage is the main event.  The crowd is older, many of them likely hearkening back to college days in the 90s, when Squarepusher reigned high as intellectual heir to the D&B throne.  The stage is sparse – a six-string bass sits quietly to the side as Jenkinson takes his place behind an LED-encrusted console.  Behind him is a backdrop screen displaying the same patterns as his pulpit, patterns that similarly ebb and flow across the visor obscuring his bearded visage from view.  Throughout his performance, these three panels respond in mathematic complexity to the sounds emitting from the speakers.

Visual displays at shows today tend to fall into one of two categories: the ironically juxtaposed (think Planet Earth-style nature shots and time-lapse film of major urban arteries) or jaw-dropping use of 3D projection (Amon Tobin’s internationally acclaimed ISAM show is the best example of the latter).  Squarepusher’s visuals are neither; instead, a flash-bulb binary assault is taking place, a hypnotic construct that seems to owe as much to the age of Atari as to the second decade of the twenty-first century.

This use of lighting is incredibly effective for the subject matter at hand.  Jenkinson is touring with Ufabulum (2012), his latest composition that – dramatically – is an entirely programmed work, with no live instrumentation of any kind.  His trademark drilling rhythms are here, as is the jocular Zappa-esque self-awareness (‘Unreal Square’s chipper little melody sounds like Jay-Z’s take on Legend of Zelda) but there is also a refreshing homogeneity, and the lighting accentuates this.  Gone is the eclecticism of, say, Ultravisitor (2004), which saw classical duets next to industrial techno next to breakbeat hip hop.  The most impressive aspect of this live show is the way Jenkinson forces his audience to internalize his rhythms.  In doing so, he forces the listener to attend to the elegant, simple melodies that typify his latest work, buried beneath the chaos.  Any musician can make noise – a master is one who can resolve this noise into something beautiful.  The effect is wholly impressive.

Jenkinson approaches his set with accomplished familiarity; he’s been in the game for quite some time and, approaching 40 himself, knows his audience will have aged too.  Whenever one of his hands is free, he is using it to hype the crowd (“come on!!”).  He also has the presence of mind to treat the separate songs on his album as just that, instead of falling back on the crutch of one long frantic dance set.  This means that his compositions are able to shine in their own right, rather than vanishing beneath a sea of synth and sub-bass.

By the time he leaves the platform, the conspicuous presence of his hitherto-untouched bass is too much for the crowd to bear, and the applause howled to the Danforth’s rafters finally brings Jenkinson back onstage, sans-visor, to blast through some classics from his catalogue.  ‘Journey to Reedham’ is of particular note; his hands a complete blur across the fretboard, Jenkinson pushes the limits of what could be called technical mastery.  No less than a dozen effect pedals are warping the instrument’s sound at any given time, and he grins openly as the crowd is moved to transports of delight by his almost frightening command of the instrument.

It would appear, then, that one stays relevant by staying true to the maxim of making the music you want to make.  The absence of live instrumentation – at one point Squarepusher’s trademark – in no way impedes the live efficacy of Ufabulum.  Rather, Jenkinson’s perseverance and adaptability grant him his longevity; he was making tracks with a wrench and a dream before today’s laptop jockeys were born, and will continue to do so long after the wobbles of their success fade into obscurity.